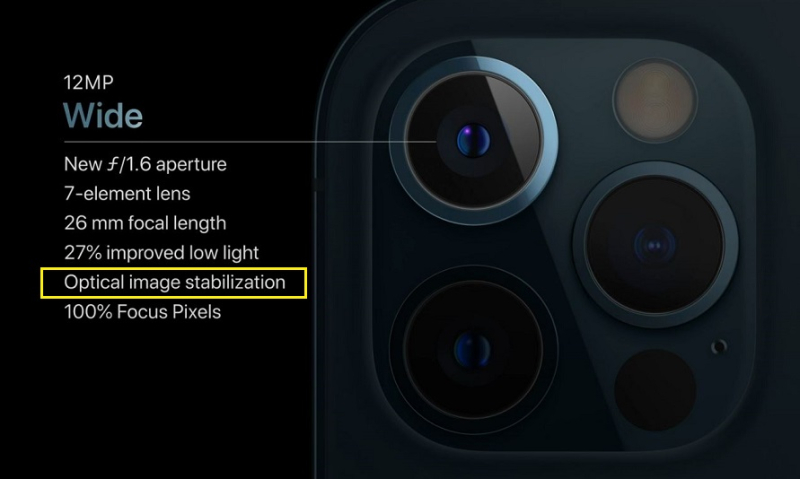 It's being reported in Taiwan today that Apple's 2021 iPhone series will come with significant camera lens upgrades. The first will include adding Sensor-Shift Optical Image Stabilizer (OIS) to all four models in addition to enlarging the Contact Image Sensor (CIS) which helps to improve the resolution. Apple first introduced the Sensor-Shift OIS with their high-end iPhone 12 Pro and Pro Max. Apple revealed that the new OIS makes 5,000 adjustments per second.

The main function of Sensor-Shift is to move the sensor instead of the lens during shooting, thereby enhancing the camera's ability to capture dynamic images while providing image stabilization. It is a new generation of mobile phone optical anti-shake technology that can reduce shaking and is suitable for night scenes and capturing momentary images.

Digitimes is further reporting that the iPhone notch will be reduced while updating their ultra-wide-angle lens in the front camera. This was also forecast by Apple analyst Ming-Chi Kuo back in early November.

Apple's 2021 iPhones will be branded iPhone 12S, which could indicate that there will be fewer changes in specifications beyond camera upgrades. To be safe, Bloomberg's Mark Gurman through in the possibility that under-display or in-display Touch ID may make it into at least one 2021 iPhone model if testing passes in time.

In addition, the 2021 iPhones will come with a larger Contact Image Sensor (CIS) lens from Sony. It's expected that the high-end 6.1-inch and 6.7-inch models will use the new CIS, while the 5.4-inch and The low-end 6.1-inch model will be changed to the current CIS of the iPhone 12 Pro series. Apple will use this to improve the resolution.

Largan’s chief executive officer Lin Enping said during an online seminar that the lens and Voice Coil Motor (VCM) could be combined to reduce the size while assisting the back-end focusing program. Largan can produce VCM alone or bundle it. The lens is shipped together.