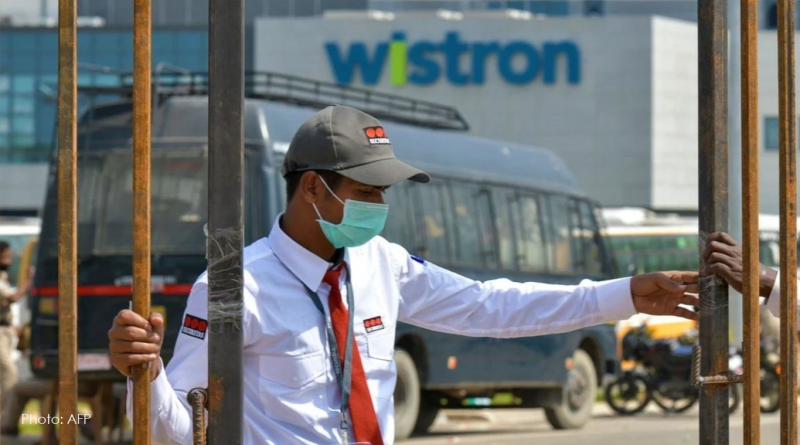 Last Saturday Patently Apple reported on the riot that broke out at the Wistron plant in India that produces iPhone SE and iPhone 7 models. Then on Tuesday we posted a follow-up report titled "Riot Damage to Wistron's Indian Plant may reach $US7.1 Million as investigators seek answers as to why non-Wistron rioters were involved. The non-Wistron rioter issue may have in-part been answered in a new report today.

A Hong Kong publication is now reporting that a report by the Karnataka state government has found that serious violations of labor laws were taking place at the iPhone manufacturing facility in India where a workers’ protest on Saturday turned violent causing millions worth of damage.

Exploitative practices such as underpayment of wages, irregular hours and poor working conditions were common at the Wistron Corporation assembling and manufacturing unit in the southern Indian state of Karnataka, as detailed by its Department of Factories, Boilers, Industrial Safety and Health.

"This Week in Asia" has seen a copy of the report, an internal document detailing preliminary investigations into the incident from the department, which is tasked with enforcing labor-related legislation to ensure workers’ safety.

About 150 workers were arrested on charges including unlawful assembly and rioting after thousands demonstrated against salary delays and ill treatment at the Wistron factory.

According to the report, the Taiwanese firm’s human resources department had poor knowledge of labor regulations and did not have enough personnel to manage the factory’s 10,500 workers, about 8,500 of whom were contractors and not full-time employees.

One source stated that "It is fairly a new establishment which became operational only in September and because of that, the system may not be fully in place." With that said, the source added that "management nor the workmen have ever approached the labor department before this issue … they could have taken guidance [before the crisis]."

There have also been allegations of middlemen exploiting the contract workers and skimming their wages, with police looking into the role of six contractors who acted as go-betweens for Wistron. They reportedly lured workers by promising them an additional allowance if they forewent breaks.

Workers at the facility refused to speak to the media, fearing repercussions, while Apple has initiated a separate investigation into the episode.

Officials from the state – which has been asked by the federal government to resolve the crisis quickly, over fears it could unnerve international investors – are keen to reopen the facility at the earliest possible date, but insist it will be done in accordance with the law. For more on this, read the full South China Morning Post.