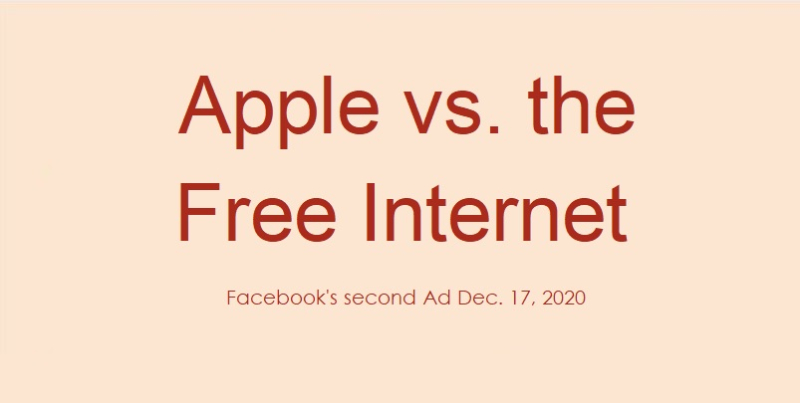 Last Friday Patently Apple posted a report titled "Apple's CEO Tim Cook basically thinks that Facebook's attacks are Overkill." The report noted that as tense as the situation is, Apple's CEO thinks that Facebook's attacks are overkill; that the issue is not as grave as the ads portend. In a tweet posted late yesterday, Cook pointed out that Apple is only giving it's users a "choice" to allow or not allow ad tracking.

One engineer wrote in response to an internal post about the campaign from Dan Levy, Facebook’s vice president for ads states that "It feels like we are trying to justify doing a bad thing by hiding behind people with a sympathetic message."

Ahead of an  internal talk that took place yesterday to explain the anti-Apple campaign, Facebook employees asked or voted up several questions that focused on the consequences of the effort on the social network's already tattered image. The most popular questions expressed skepticism or concern, as follows:

In his answers, Facebook vice president of product marketing Graham Mudd said the company has been "really clear" in marketing materials and calls with analysts and the press that Apple’s iOS change "does have a financial impact on us."

In the end, many employees were unconvinced by the presentation. Some did not understand how Apple’s changes would negatively affect small businesses, while one said Facebook’s attempt to undermine Apple’s privacy policy made it "a traditional trojan virus."

The stakes for Facebook are high. Analysts project the company will bring in a record $80 billion in ad sales this year, while internal data shared with employees earlier this month shows that the social network has never had more advertisers. In the last six months of 2020, the company had more than 12.6 million monthly active paying advertisers, up from 11.9 million in the first half of this year, while weekly value of its ads grew 26% to $2.3 billion.

Apple’s plan to require iPhone owners to opt in to being tracked across apps and the web would reduce the amount of data Facebook collects, potentially resulting in less effective ads and less revenue. That change comes during a time when the social networking giant is facing an unprecedented threat to its business as state and federal regulators have threatened to break up the company with a series of antitrust lawsuits. For more on this, read the full BuzzFeed.News report.

It should be noted that BuzzFeed is known for writing controversial stories and so without knowing if the complaints represented 10% or 60% of the employees at Facebook's meeting yesterday, it's difficult to assess how big the backlash against the anti-Apple campaign really is internally.