On the last granted patent day of 2020, the U.S. Patent and Trademark Office officially granted Apple a patent for a Virtual Acoustic System for headphones that produce 3D audio.

Apple notes that the human auditory system modifies incoming sounds by filtering them depending on the location of the sound relative to the listener. The modified sound involves a set of spatial cues used by the brain to detect the position of a sound. Human hearing is binaural, using two ears to perceive two sound-pressure signals created by a sound.

The sound pressure waves interact with the environment of the path between the sound source and the ears of the listener. In particular, the sound pressure waves interact with the head and the ear structure of the listener. These interactions modify the amplitude and the phase spectrum of a sound dependent on the frequency of the sound and the direction and the distance of the sound source.

These modifications can be described as a Head Related Transfer Function (HRTF) and a Head-Related Impulse Response (HRIR) for each ear. The HRTF is a frequency response function of the ear.

It describes how an acoustic signal is filtered by the reflection properties of the head, shoulders and most notably the pinna before the sound reaches the ear. The HRIR is a time response function of the ear. It describes how an acoustic signal is delayed and attenuated in reaching the ear, by the distance to the sound source and the shadowing of the sound source by the listener's head.

A virtual acoustic system is an audio system (e.g., a digital audio signal processor that renders a sound program into speaker driver signals that are to drive a number of speakers) that gives a listener the illusion that a sound is emanating from somewhere in space when in fact the sound is emanating from loudspeakers placed elsewhere.

One common form of a virtual acoustic system is one that uses a combination of headphones (e.g., earbuds) and binaural digital filters to recreate the sound as it would have arrived at the ears if there were a real source placed somewhere in space. In another example of a virtual acoustic system, crosstalk cancelled loudspeakers (or cross talk cancelled loudspeaker driver signals) are used to deliver a distinct sound-pressure signal to each ear of the listener.

In Apple's summary, they note that it would be desirable to provide a way to synthesize binaural audio signals (that would drive respective earphone transducers at the left and right ears of a listener) for a virtual acoustic system, to create the illusion of a sound source moving toward or away from the listener between I) the end of the effective range of near-field modeling and II) the center of the listener's head or another in-head location.

In a device or method for rendering a sound program for headphones, a location is received for placing the sound program with respect to first and second ear pieces.

Apple's patent FIG. 1 below is a view of an illustrative listener wearing headphones; FIG. 3 is a flowchart of a portion of a process for synthesizing a binaural program for a sound located in the in-head region between the ear pieces on the listener's ears; FIG. 7 is a block diagram for a portion of a circuit for processing a stereophonic sound program when the sound location is in the in-head region between the two ear pieces. 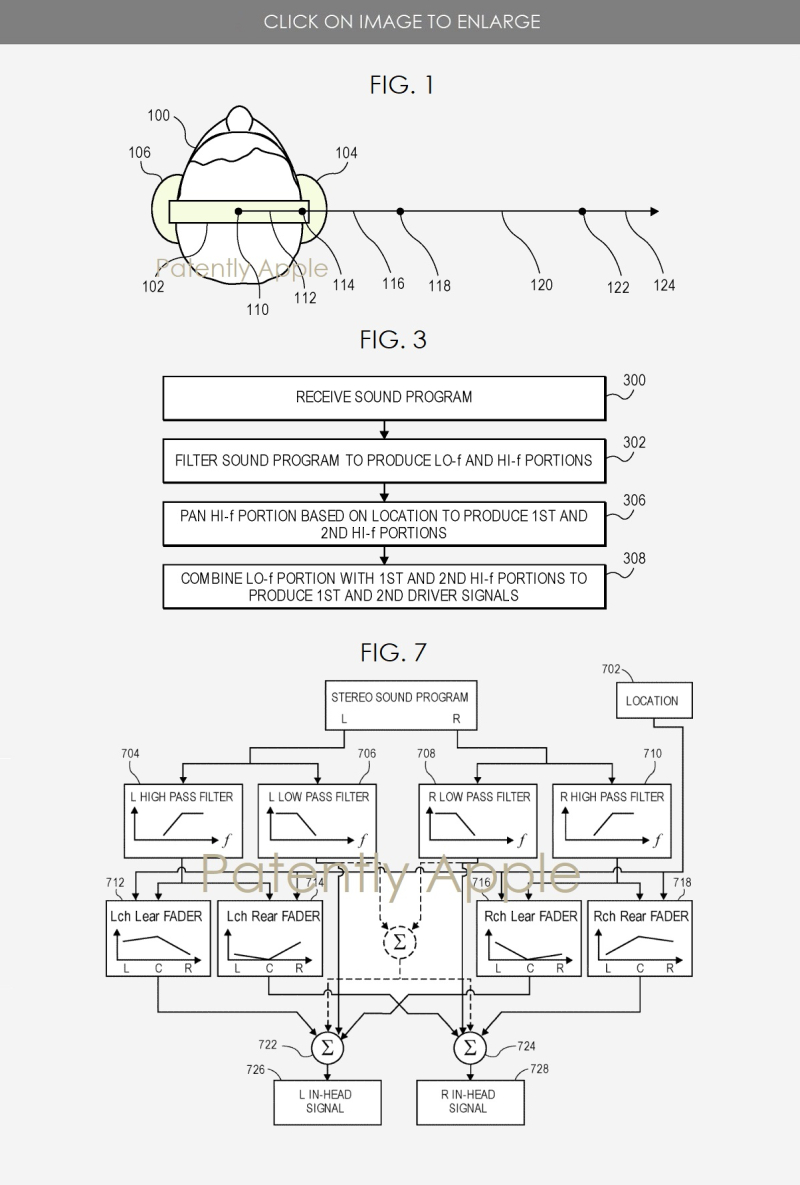 More specifically Apple's patent FIG. 1 above shows a vector having an origin at the midpoint #110 between the two ear pieces #104 and #106, which is generally the center of the user's head. The vector extends through the first ear piece #104, shown as the ear piece for the right ear of the listener #100. The vector may be divided into regions by I) a boundary #114 at the ear piece #104, a boundary #118 where a near-field HRTF becomes effective, and a boundary #122 where a far field HRTF becomes effective.

Another earphone related patent was granted to Apple today covering Beats earphones with a formable ear hook could be reviewed here. The lead inventor noted on the patent is Robert Boyd who came from Beats.