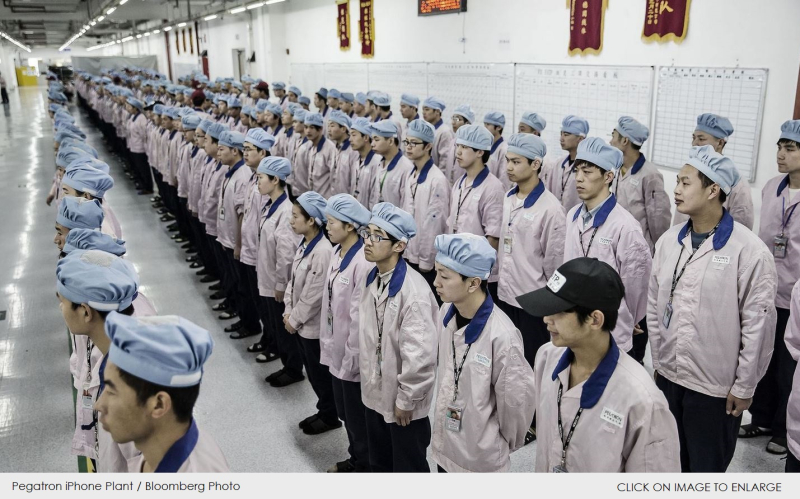 Six years ago to the month there was a report about an investigation by the BBC that resulted in a documentary that revealed the miserable working conditions of Apple workers in China and Indonesia. The documentary focused on two allegations against Apple, namely that the working conditions in its iPhone factories in China are so dismal that workers are falling asleep right on the factory line. Patently Apple covered this in two reports titled "Apple Vehemently Disagrees with the BBC's Televised Report called Apple's Broken Promises," and "Apple Responds to the BBC's 'Broken Promises' Documentary." We posted a deeper follow-up report hours later titled "The BBC Report About Apple is Motivated by Politics and Unions." The BBC was relentless in 2014 in their attempt to sully Apple's shiny reputation. In the end, they failed in making their story stick with the public.

Back in 2014, China had passed new laws reportedly protect workers in factories stipulating that no more than 10% of employees be hired on temporary contracts. This was because temporary workers had more precarious employment, and often received fewer benefits. The law allowed a two-year grace period for compliance, and Apple started out well by investigating how many suppliers would be in breach of the law when it took effect.

Though in the end, little progress had reportedly been made by the time the law came into force. Rather than take action against suppliers breaking the law, former employees claim that Apple decided to simply ignore it.

According to today's report by The Information, four former Apple employees familiar with Apple's labor issues, stated that for years Apple took no major action against its suppliers for violating the temp-worker labor law out of concerns it would create costs, drain resources and delay product launches. Three of the ex-Apple employees were members of its supplier responsibility team, which is in charge of monitoring violations and enforcing penalties, while the fourth was a senior manager familiar with its operations in China.

Further, the report claims that "Apple executives knew that its production strategy caused the increase in demand for temporary workers, internal data shows. According to an internal Apple presentation in 2015 it stated: "Our ‘surprise and delight’ business model requires a huge volume of labor for only a short period of time as we ramp products. We are making it difficult for our suppliers to comply with this law as 10% dispatch is simply not enough to cope with the spikes in labor demand we require during our ramps." For more on this, read the full report by The Information."

Apple issued a statement in response to today's report by The Information. The statement claimed that Apple was dedicated to the fair treatment of everyone who works for them.

More specifically the statement added that workplace rights are human rights and that their supplier code of conduct was the strongest in the industry, and that it applies equally to everyone across their supply chain.

Apple added that occasionally factories use temporary labor, and that they monitor this closely to ensure compliance with their code.

Where they find issues, Apple works closely with their suppliers on corrective action plans.

Some will say that The Information is going back too far for it to be a hot issue today. In some ways that's true. For those more interested in current issues, China Labor Watch, who has been monitoring Apple's behavior and responses to labor issues for over a decade, is a better ongoing source.

However, in the bigger picture, it's China Labor Watch (CLW) that looked into the matter at a deeper level. They reported on the Pegatron development in a report titled "Improvement or just Public Relations? China Labor Watch challenges Apple’s statement on Pegatron."

At one point, the CLW report states that "Apple’s audit failed to recognize serious labor violations at their supplier factories. On September 10th, they denied the labor violations despite evidence provided by CLW. Since then, Fu Jie, a dispatched worker has died after he was forced to work overtime in the Chinese National Day holiday week. His family protested at the Pegatron Kunshan factory gate demanding information and a thorough investigation into his death. So far, his family members have been taken away by the police and detained at the local Public Security Bureau three times and were detained for more than 12 hours once. Apple still denies that any workers have died at the factory."

In late November, Patently Apple posted a report titled "The Washington Post Claims that Apple is Lobbying against a U.S. Bill aimed at Stopping Forced Labor in China"

These kinds of reports, with some in-depth, constantly conflict with statements made by Apple's PR machine.

Although we'll continue to report on such reports from time to time, until there's a solid case against Apple where a government takes Apple to court or closes an Apple supplier's plant that's significant to Apple's bottom line, it boils down to little more than distracting noise.

One more thing: Our cover graphic is a photo of a Pegatron mega iPhone Plant. It was the cover graphic of Bloomberg report back in 2016 about this recurring issue of excessive overtime to meet iPhone's busiest product cycles. While the year may differ, the issue remains constant over time.