While Apple Remained the Tablet Market Leader in Q320, their strong line-up should greatly boost their Holiday Quarter 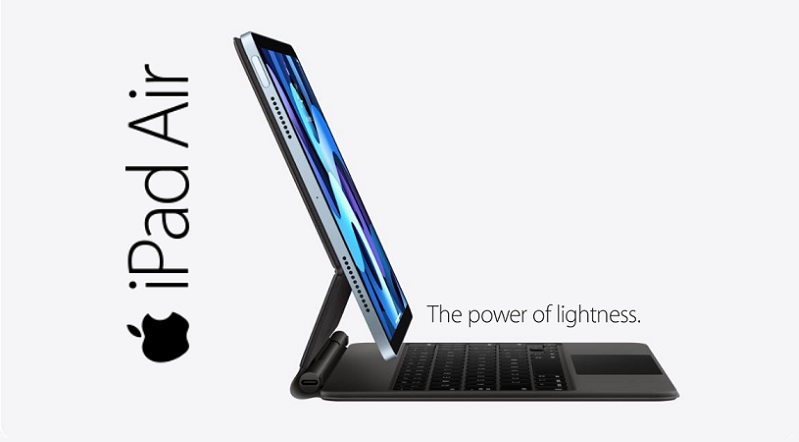 According to IDC's latest Tablet report, the worldwide tablet market delivered solid results in the third quarter of 2020 (3Q20) with 24.9% year-over-year growth and shipments totaling 47.6 million units. The demand for affordable access to basic computing and larger screens to facilitate remote work, learning, and leisure due to COVID-19 restrictions drove the market. Consumer spending on technology has also been on the rise while other categories, such as dining, entertainment, and travel, have declined during the pandemic.

In 2Q20 Apple was the tablet leader shipping 12.4 million units. In 3Q20 Apple shipped 13.9 million units to lead the tablet market once again. The vendor recorded year-over-year growth of 17.4%. As expected, the vendor performed well in the education segment and there was growth in the consumer segment after two quarters of decline.

While the iPad (2019) was able to maintain the largest share of shipments, the latest iPad (2020) managed to record a notable volume of shipments despite its late launch during the quarter.

Apple's iPad Air is likely to boost calendar Q4 iPad sales along with the new iPad Pro due out later this month. The new iPad Pro is predicted to be the first iPad to be powered by Apple Silicon which could accelerate sales.

Tim Cook stated during Apple's Financial Conference Call: "Our iPad lineup continues to set the pace for the category, including the new iPad Air now shipping with the A14 Bionic, our most powerful chip ever." 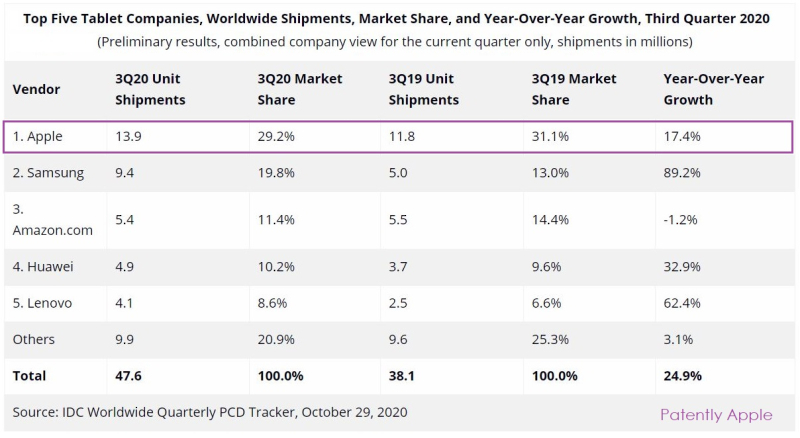 With that said, cheaper tablets from competitors gained some ground on Apple due to volume sales to schools during COVID-19. The company gaining the most was Samsung.

In September Patently Apple posted a report titled "The School Lockdowns in Europe, the Middle East and Africa has Disadvantaged Apple's iPad & Favored Samsung Tablets." This advantage catapulted Samsung back to being the #2 tablet player by growing a stunning 89% in the quarter. Heavy discounts are helping Samsung in foreign schools.

The IDC report that Samsung has focused on its Android detachable portfolio, which recorded solid growth in the quarter. Samsung also launched the Galaxy Tab S7+ in 3Q20 – the first 5G tablet to be available worldwide – making it one of the first tablet vendors to adopt 5G.