The Washington Post Claims that Apple is Lobbying against a U.S. Bill aimed at Stopping Forced Labor in China 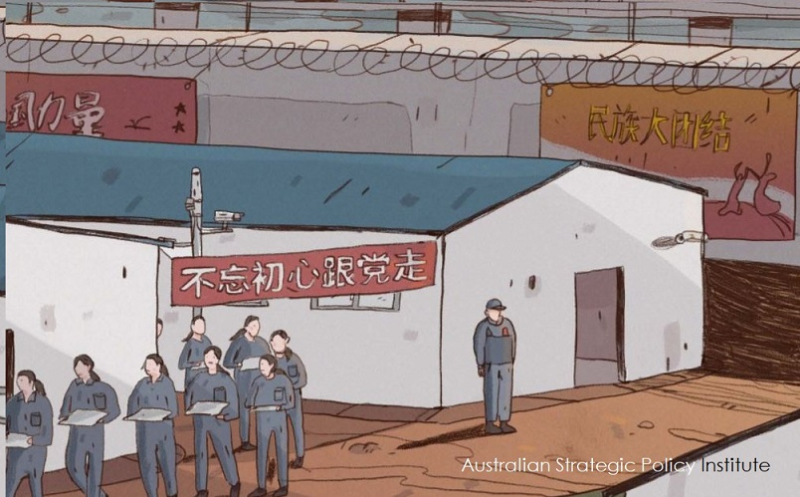 In March 2020 Patently Apple (PA) posted a report titled "China sells Muslim minority workers to Factories making U.S. Products for Apple, Nike, Adidas and others." It was noted in the report that dozens of popular companies including Apple, Nike, Adidas, Uniqlo and Skechers had suppliers linked to forced labor in China involving Muslim minorities such as Uyghurs and Kazakhs, according to a new report from the Australian Strategic Policy Institute (ASPI). In July PA posted another report on this issue titled: "Apple Denies a report that one of their Chinese Suppliers are using Uyghur slave labor on Production Lines." It's an issue that won't go away.

We're now learning in a new damning Washington Post report that "Apple lobbyists are trying to weaken a bill aimed at preventing forced labor in China, according to two congressional staffers familiar with the matter, highlighting the clash between its business imperatives and its official stance on human rights.

The Uyghur Forced Labor Prevention Act would require U.S. companies to guarantee they do not use imprisoned or coerced workers from the predominantly Muslim region of Xinjiang, where academic researchers estimate the Chinese government has placed more than 1 million people into internment camps.

Apple is heavily dependent on Chinese manufacturing, and human rights reports have identified instances in which alleged forced Uighur labor has been used in Apple’s supply chain.

The staffers, who spoke on the condition of anonymity because the talks with the company took place in private meetings, said Apple was one of many U.S. companies that oppose the bill as it’s written. They declined to disclose details on the specific provisions Apple was trying to knock down or change because they feared providing that knowledge would identify them to Apple. But they both characterized Apple’s effort as an attempt to water down the bill.

Cathy Feingold, director of the international department for the AFL-CIO: 'What Apple would like is we all just sit and talk and not have any real consequences. They’re shocked because it’s the first time where there could be some actual effective enforceability.'

Maya Wang, a China researcher at Human Rights Watch: "I’m not entirely surprised that Apple would be involved in trying to water down legislation that concerns protection of human rights in China." Wang added that Apple’s lobbying effort is "unconscionable."

Apple CEO Tim Cook has said publicly that Apple does not tolerate forced labor in its supply chain. 'Forced labor is abhorrent,' Cook said in a congressional hearing in July. 'We would not tolerate it in Apple,” he said, adding that Apple would 'terminate a supplier relationship if it were found.'

Apple spokesperson Josh Rosenstock: 'Apple is dedicated to ensuring that everyone in our supply chain is treated with dignity and respect. We abhor forced labor and support the goals of the Uyghur Forced Labor Prevention Act. We share the committee’s goal of eradicating forced labor and strengthening U.S. law, and we will continue working with them to achieve that.'

Rosenstock further added that the company earlier this year 'conducted a detailed investigation with our suppliers in China and found no evidence of forced labor on Apple production lines, and we are continuing to monitor this closely.'

Apple’s lobbying firm, Fierce Government Relations, disclosed that it was lobbying on the bill on behalf of Apple in a disclosure form that was first reported by the Information. However, the form did not say whether Apple was for or against the bill or whether it wanted to modify it in any way. Lobbying disclosure forms do not require that information. Fierce referred The Washington Post to Apple’s public relations team.

The new bill would make it more difficult for U.S. companies to ignore abuses taking place in China and give U.S. authorities more power to enforce the law. One provision in the bill requires public companies to certify to the Securities and Exchange Commission that their products are not made using forced labor from Xinjiang. If companies are found to have used forced labor from the region, they could be prosecuted for securities violations.

The Uyghur Forced Labor Prevention Act passed 406 to 3 in the House in September. People involved in the legislation said the apparel industry was caught off guard by how quickly it passed without much lobbying.

At present, the bill is primarily focused on textiles and other low-tech industries which wouldn't include Apple. Though Apple's lobbying efforts could be to ensure that their name is not added to a future bill.

While it’s unknown how much electronics manufacturing occurs in the region, some human rights groups believe there are plants that make electronics components in Xinjiang. And private companies, which act as brokers for Xinjiang laborers, have arranged for workers to be transferred from concentration camps to electronics factories outside of Xinjiang, according to human rights reports.

However, the Australian Strategic Policy Institute report linked to at the top of our report, identified four alleged instances in which labor from the Xinjiang region has been connected to Apple’s supply chain. The report alleges that the workers were likely to have been forced or coerced, but it did not offer proof confirming the work terms and conditions.

In August, the Tech Transparency Project uncovered shipping records showing Apple was importing cotton T-shirts from a company in Xinjiang that Congress imposed sanctions on for its alleged use of forced labor. Apple has denied the claim. For more, read the full Washington Post report.

The rest of the Washington Post report basically rehashes information originally from the Australian Strategic Policy Institute report that we covered in depth in March.

Until the U.S. bill adds a second phase concerning higher-end technology companies, we won't know if Apple is listed in the bill and Apple will continue to have their PR machine and lobbying group distance themselves from any wrong doing.

There's no doubt that Apple is under a dark cloud concerning this issue and that there are forces that are adamant Apple is guilty pure and simple. Yet proving Apple's guilt will be close to impossible being that Chinese companies are highly unlikely to ever cooperate with any outside investigations that go against the policies of communist party.

Apple will continue to deny any wrong doing and continue to publish 'Supplier Responsibility' reports full of smiley workers (as presented below). Unless unrefutably evidence is discovered, these accusatorial reports are no better than reports of alien landing story headlines found in supermarket tabloids. One more thing for the record: The author of the report is Reed Albergotti. His bio under today's report states:

"Reed Albergotti is The Washington Post's consumer electronics reporter, taking readers inside powerful and secretive companies such as Apple and shedding light on the murky and global industry responsible for building the myriad devices that touch every aspect of our lives."

If that Albergotti's mission in life at the Post, then you also have to put that into the context of this report as well. He has to present negative information against "powerful secretive Apple" in order for his bio to have any value.