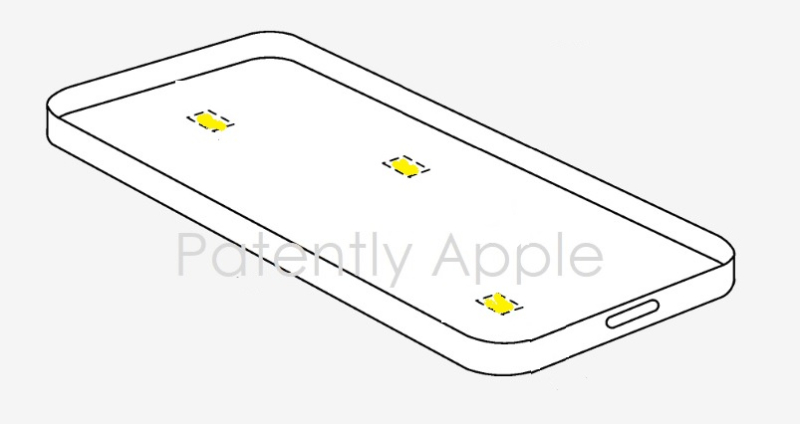 As iPhones get larger with added components and better cameras, the chances are highly likely that iPhones will run hotter. Apple claims that excessive heat could lead to failures of the components themselves due to, e.g., melting solder connections or faults in metal structures inside an integrated circuit. Even if the temperature doesn't increase to the point of causing failures, the device itself could be uncomfortable to handle leading to an unpleasant user experience. In one of Apple's latest granted patents published today, we learn that Apple has invented yet another kind of smart iPhone case that will assist in keeping your iPhone cooler internally and externally.

Apple's granted patent covers a new kind of iPhone case that could be made of silicone, rubber, plastic, metal, or composite structure that surrounds one or more sides of the iPhone (portable electronic device) and contains a means for detection when the case is attached. The iPhone can be configured to detect the presence of the case and adjust operating parameters for the iPhone in response to detecting the presence of the case. The operating parameters include a thermal threshold associated with a temperature sensor included in the portable electronic device.

In some embodiments, the sensor is a thermistor located proximate a side wall of the housing of the portable electronic device. The thermistor generates a signal that is utilized to determine an operating temperature of a particular component proximate the thermistor.

Apple's patent FIG. 5 below illustrates a protective case (#500) for an iPhone that includes a thermal insert (#510) that is capable of acting as a heat sink and/or a heat spreader as well as a thermally conductive structure (#520) in contact with one or more surfaces of the housing. 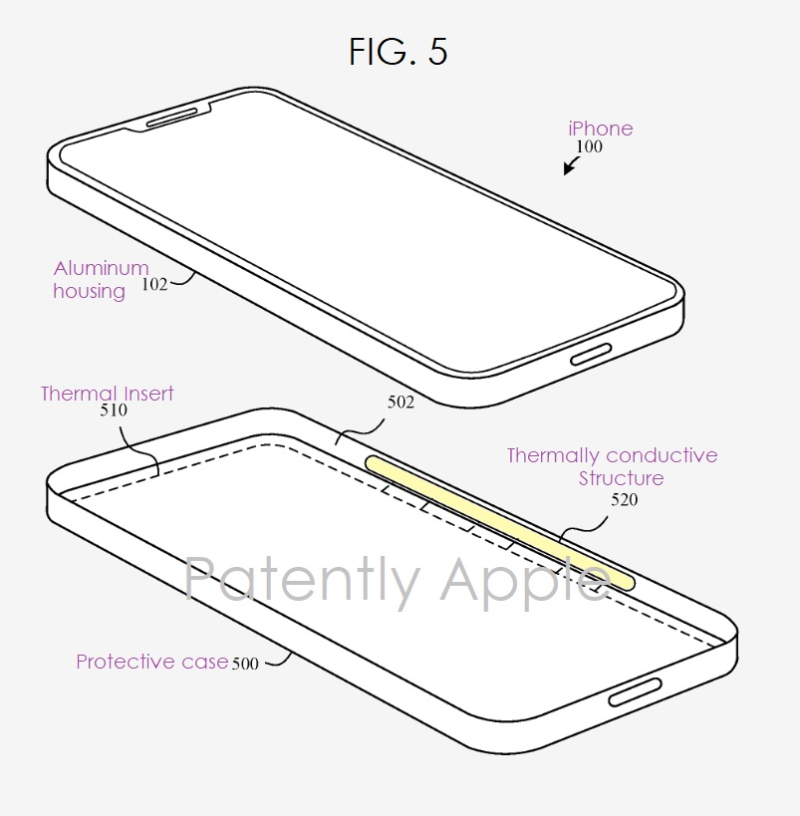 Apple's patent FIG. 6 below illustrates an iPhone protective case (#600) includes multiple magnetic elements for signaling to the iPhone that is successfully retained within the protective case (#400). The design shown below includes placing multiple magnetics within the iPhone and case to counter false detection events due to stray magnetic fields.

In some embodiments, a protective case can include multiple elements #610 corresponding with multiple, discrete sensors (#620) included in the iPhone. 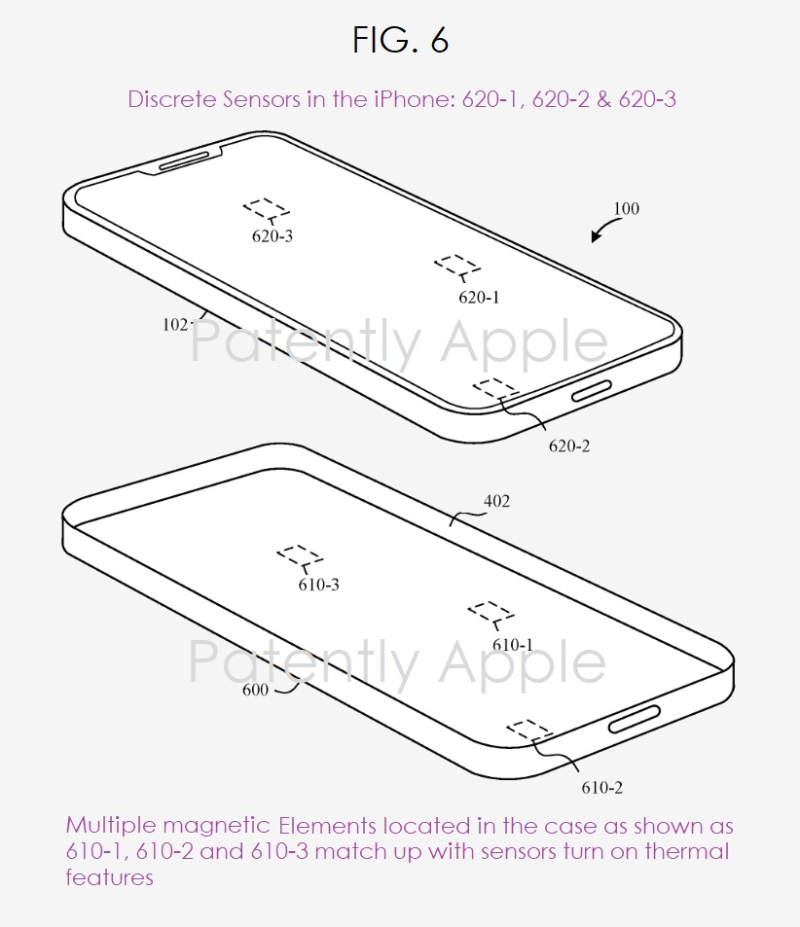 Apple's patent FIG. 7 below illustrates a schematic diagram of a number of components of the portable electronic device, including #760 which is the thermistor sensor referred to earlier in the report. 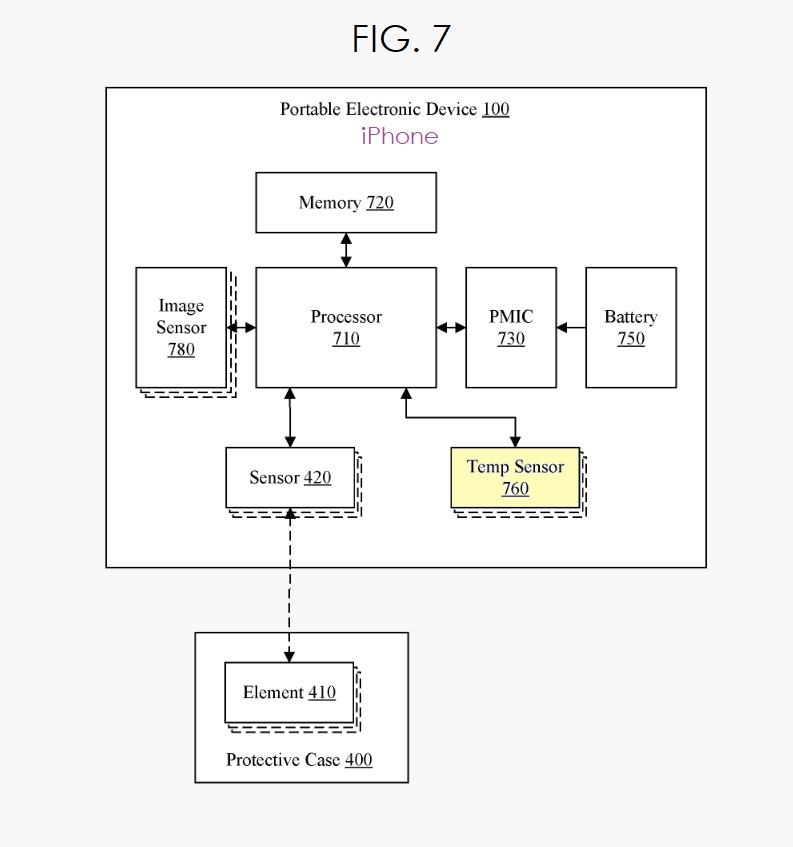 For more details, review Apple's granted patent 10,838,462. Apple originally filed for this patent in Q1 2019. It was published today by the US Patent and Trademark Office.

In a single day Apple was granted two patents covering possible future iPhone cases.  The first was posted earlier today under the title "Apple Wins a Patent for Future Smart iPhone Cases and Watch Bands that use Quantum Tunneling Material."