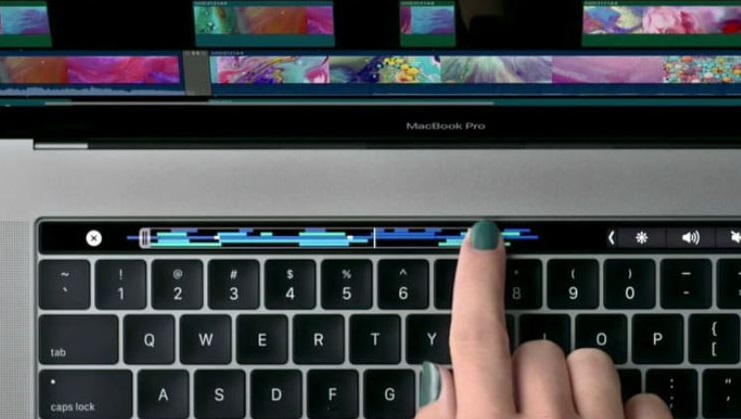 Apple's patent patent application relates to Apple's Touch Bar gaining Force Touch. Apple states that the invention "generally relates to electronic devices, and particularly electronic devices having a display with a force sensor positioned at least partially around, and coplanar with, the display." The "display" referred to is the "second" display.

Apple's patent FIG. 1 below illustrates a MacBook Pro with a Touch Bar that offers Force Touch input. Generally, the cover  set over the secondary display is formed from glass, plastic, carborundum, or another suitable transparent material.

The cover typically flexes or otherwise deforms when an input force is exerted on it, although the amount the cover flexes maybe visually and/or tactilely imperceptible to a user. By flexing, the cover may transmit some or all of the input force through the display, thereby permitting the force-sensing circuitry #260 to operate (shown in FIG. 3). Apple's patent FIG. 3 above shows a top cross-sectional view of the display of FIG. 2, illustrating force-sensing circuitry surrounding part of the display.

While Apple has dropped force touch or 3D touch from Apple Watch, Apple sees that it could find a new home on the MacBook Pro's Touch Bar.

For the finer details, review Apple's patent application number 20200371632 that was published today by the U.S. Patent Office and filed back in May 2019. Considering that this is a patent application, the timing of such a product to market is unknown at this time.