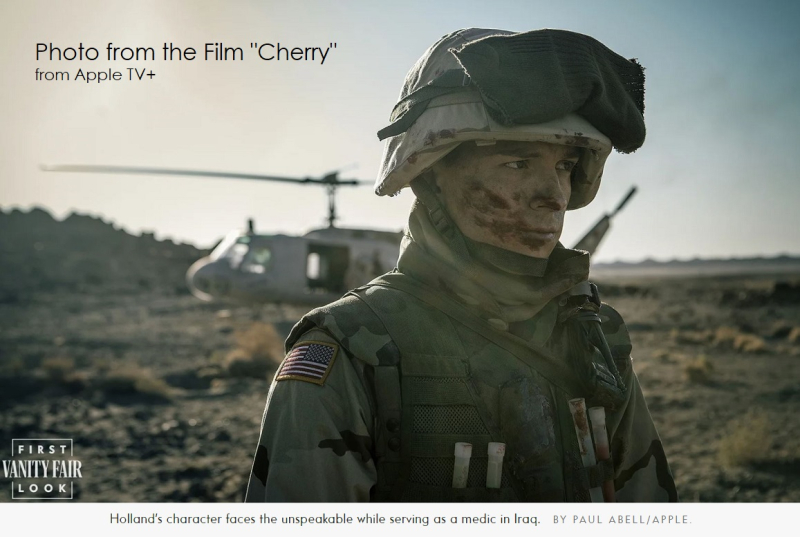 In late September Patently Apple posted a report titled "Apple Lands a new Drama title 'Cherry' about a Former Army Medic who gets addicted to Oxycontin when returning to the U.S." Yesterday Vanity Fair was able to get the first look at Apple's new movie that will be in Theaters on February 26, 2021 and on Apple TV+ on March 12.

The Academy will announce Oscar nominations on March 15, 2021. Feature film must have a qualifying release date between January 1, 2020 and February 28, 2021 – extending the standard December 31 cut-off due to COVID-19. Apple's release date is to ensure that "Cherry" could be considered by the Academy. Apple's planned release date is just under the wire.

The lead character of the movie 'Cherry' is Nico Walker who is being played by Tom Holland who played in the 2017 'Spider-Man: Homecoming' movie and again in 2019 with 'Spider-Man: Far from Home.'

Vanity Fair reports that "Holland’s title character Nico Walker nicknamed 'Cherry' is both volatile and vulnerable, a hard-knock nobody from Cleveland who’s just scraping by but doesn’t even have any big dreams to guide him. Every solution to his problems only deepens the trouble: College isn’t working out, so Cherry joins the Army to serve in Iraq as a medic. He returns home haunted and damaged, and starts abusing opioids to blunt his PTSD. To pay for the drugs, he resorts to bank robbery. The more desperate he gets, the more banks he has to rob. Every step is a step down, a progression into the abyss.

They described Cherry as six movies in one, spanning from the mid 2000s to the present. Director Joe Russo said that 'He travels a great distance over a 15-year period,' Joe Russo said. 'The movie’s broken up into six chapters that reflect those different periods, and each one has a different tone.'" For more details and some exclusive photos, check out the the Vanity Fair report.

Indiewire reports director Russo adding that "This is a movie that’s supposed to define the experience of having PTSD, the experience of being addicted to opioids. And the mission of the film is to generate empathy, not to generate disdain, not to indict. It's  critical that you empathize with his struggle and his journey because a lot of people are going through this, and they’re having a very human experience. I think empathy is in incredibly short supply right now in the world. And it’s a tragedy."

For Holland, "Cherry" provides the opportunity to leave Marvel behind for a bit and tap into the depths of his dramatic acting chops. Anthony Russo said he was "surprised to see how thoroughly committed [Holland] was to every facet of the character," and added, "The darkest, most difficult sides of that character, he really embraced them and ran at them and tried to give them life within himself in a way that not a lot of people could pull off."