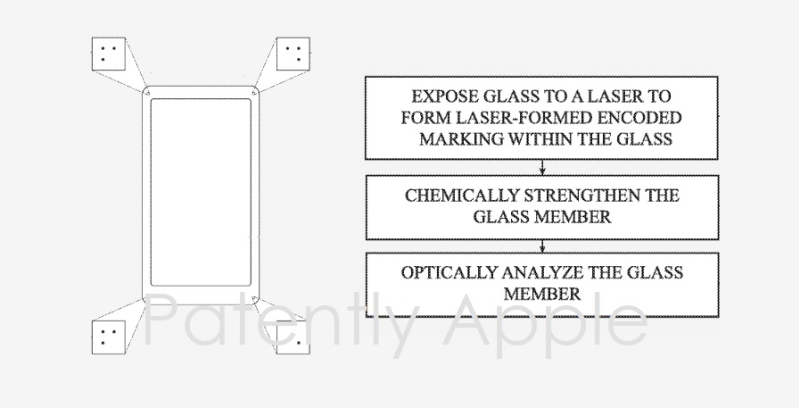 Today the US Patent & Trademark Office published a patent application from Apple that relates to a unique system that places a special coding under the cover glass prior to the glass being put into an ion batch for strengthen the glass. The encoding is primarily placed under the corners of the glass that could be read by a special analytical tool that will be available to Apple Store repair facilities where they could identify which plant and country the glass was made and assembled etc. Although Apple never says it, it could also act as a method that would assist Apple to know if the iPhone is a counterfeit considering that there are un-specific identifiers recorded in the coding.

Apple's patent covers a new system that comprises of a chemically strengthened glass member and, more importantly, a new encoding process under the cover glass. The encoded marking may include an array of marks, each mark of the array of marks having a dimension between about 3 microns and about 10 microns and set apart from an adjacent mark by an unmarked area of the chemically strengthened glass member. Each mark may represent a bit of information in a binary number system. The encoded marking may be readable, by an optical magnification apparatus, through the upper surface.

The encoded information could include information about the glass member, including information about manufacturing steps, conditions, or operations to which the glass was subjected, lot numbers, manufacturing dates, actual processing parameters to which that particular glass member was subjected (e.g., an actual process temperature, time, composition, etc.), an identifier of a mother sheet from which the glass member was singulated, and the like, may be associated with the identifier that is represented by the encoded marking.

Apple further notes that by positioning the encoded markings within the glass, rather than on a surface of the glass, the markings may remain undamaged or unchanged even through polishing, grinding, or other manufacturing operations that affect the surface of a glass member. 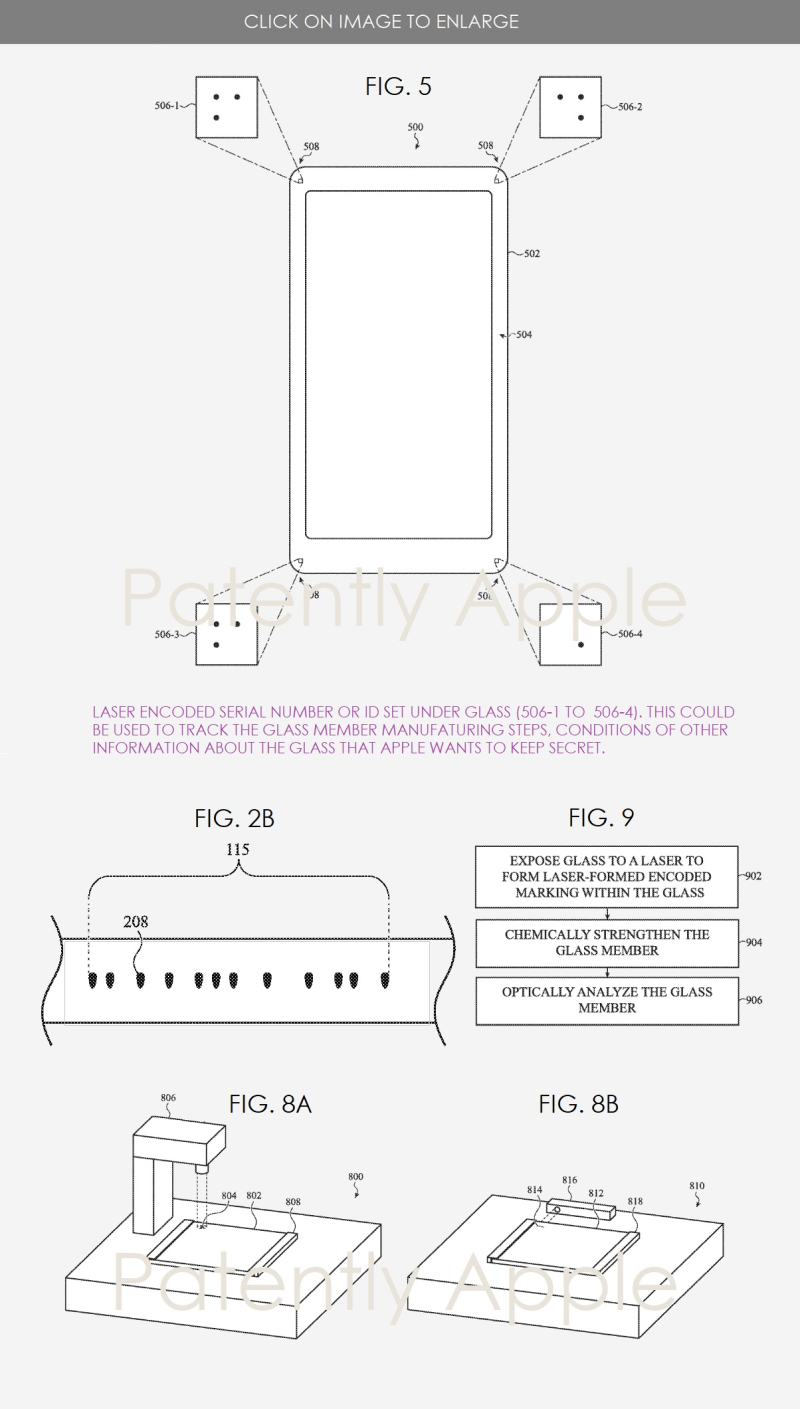 Apple's patent FIGS. 8A and 8B above are illustrative examples of Apple's optical analysis system.

More specifically, in respect to Apple's patent FIGS. 8A-8B Apple states that optical analysis of an encoded glass member may be used to validate the presence and readability of the encoded marking after laser marking, strengthening, and/or polishing operations.

Optical analysis may also be performed on complete devices that include marked glass members. For example, if a device is returned to the manufacturer for repair, the manufacturer may optically analyze the encoded marking to determine information about the glass member or the overall device.

Although the device in the patent figures show an iPhone, the new glass encoding system could be applied to Apple Watch, iPads, MacBooks and more.

Apple's patent application number 20200361817 that was published today by the U.S. Patent Office was filed back Q3 2019. Considering that this is a patent application, the timing of such a product to market is unknown at this time.