The Apple Watch Milanese Loop band with its magnet closure has been popular from day one. In a video review of this band presented below the reviewer points out that a minor complaint about the band is that it's held in place with a single magnet at the end of the band. This allows the band to loosen over the course the day forcing a reset. The video below is preset to start at the point that this complaint is described.

Today the US Patent & Trademark Office published a patent application from Apple that relates to a new magnetic strip system that provide a stronger hold on a user's wrist. A key aspect of the design includes a band of flexible magnets versus a single magnet from the past.

Apple's patent application covers an electronic device, such as a wristwatch or fitness/health tracking device, can be attached to a user's wrist by a wristband. Conventional elastic bands can lose elastic properties over time and can become too big for a user's wrist. Other materials forming the flexible bands can tear or deteriorate over time due to forces applied at the hole of the flexible band by a tongue of a buckle.

Metal bands including a metal clasp can include a plurality of components all coupled together, which can fail, become uncoupled, or otherwise malfunction over time.

Additionally, it can be desirable to maximize the comfort of the user while wearing the electronic device. Often, a secure attachment can apply an undesirable amount of force on the wrist of the user. In many cases, conventional wristbands may catch, pinch, or pull a user's hair or skin during use if the band is overly tight which is mentioned in the video review of the current Milanese Loop band provided for at the top of this report.

In other cases, wristbands may slide along a user's wrist, turn about a user's wrist, or may be otherwise uncomfortable or bothersome to a user if the band is overly loose. These problems can be exacerbated during periods of heightened activity, such as while running or playing sports.

Furthermore, adjusting the size or fit of conventional wristbands often requires multiple steps, specialized tools, and/or technical expertise. Sizing options available to a user may be insufficient to obtain a proper fit.

The fit may be different and/or may be perceived to be different given certain environmental (e.g. temperature, humidity) or biological conditions (e.g., sweat, inflammation). As a result, users of conventional wristwatches and/or fitness/health tracking devices may select a tolerable (although not optimally comfortable) fit, reserving tight bands for fitness/health tracking devices and loose bands for conventional wristwatches.

However, some wearable electronic devices may be multi-purpose devices, providing both fitness/health tracking and timekeeping functionality. Accordingly, a user may prefer the fit of a band to vary with use. For example, a user may prefer a looser fit in a timekeeping mode and a tighter fit in a fitness/health tracking mode. Accordingly, there is a present need for systems and methods for dynamic adjustment of the fit of wearable electronic devices.

Apple's patent FIGS. 1 and 2 below illustrate perspective views of a future Apple Watch on a wrist of a user with FIG. 4 illustrating the face side of the band that is visible by the user. 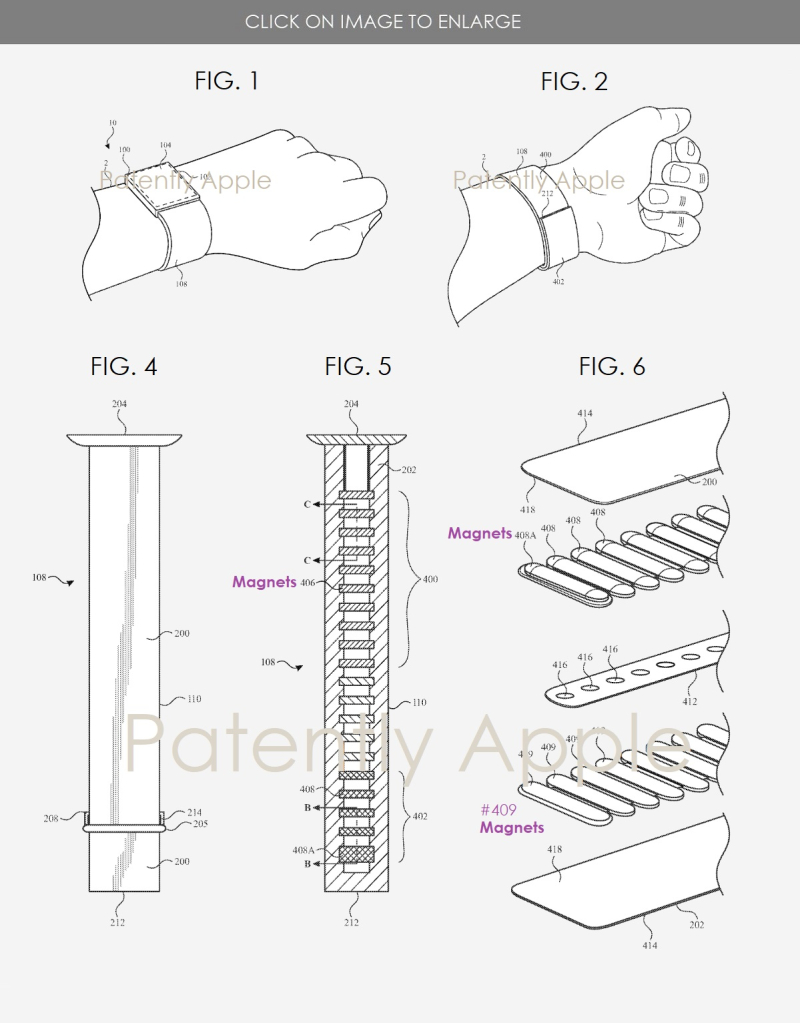 The rear side of the band is presented in FIG. 5 that illustrates a plurality of "first magnets" #406 and a second magnets #408 distributed along a longitudinal length of the wristband #108; FIG. 6 illustrates an assembly for a wristband can include multiple layers that support multiple magnets.

Further to FIG. 6 Apple notes that the support structure #412 can join the magnets together and maintain the magnets in a desired arrangement along a length of the wristband.

With such stretch capability, the wristband can adapt, for example by changing its circumference as the user moves, exercises, stretches. Such adjustments can be made without sliding overlapping portions relative to each other, thereby avoiding adjustments that make the wristband durably looser or completely undone.

Such stretching can be desirable to ensure a consistent, strong attachment to the wrist. Stretch capability can be provided by material selection, modified orientation of fibers in a woven material, and/or structural features, such as holes, cuts, slots, and the like.

There are a lot of finer details that could be found in reviewing Apple's patent application number 20200367613 that was published today by the U.S. Patent Office and originally filed back in May 2020. Apple's provisional patent was filed in May 2019.