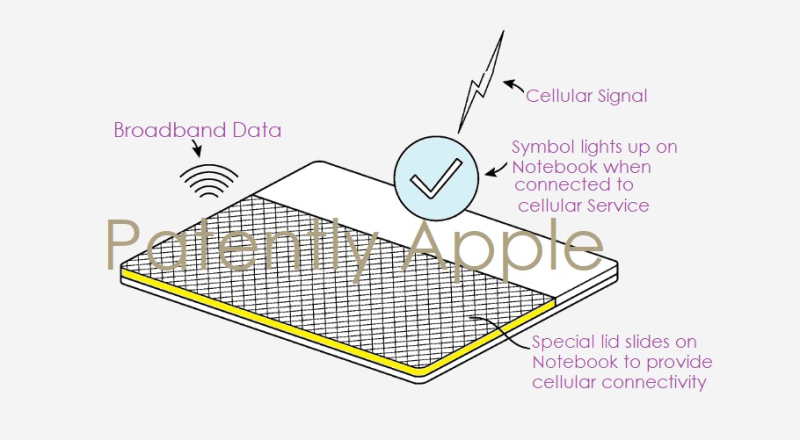 Patently Apple had created an archive back in 2010 titled "Cellular MacBook." Apple's patents on this project began to dry up after 2017.  Then out of the blue, a rumor surfaced on Digitimes that Apple was planning a 5G MacBook. While the rumor missed the second half of 2020 time frame, it could very well be part of the magic behind the 2021 16" MacBook Pro with a next-gen mini-LED display.

Like a number of Apple patents, competitors grab Apple's patent-pending or even granted patents and run with the concept to be first to market. One such concept was a MacBook with a detachable display doubling as an iPad. Microsoft ran with the concept with their Surface Book. Apple patented a mobile iPad keyboard and, you got it, Microsoft beat Apple to market on that hands down.

Now with the Cellular MacBook, Microsoft's patent-pending invention is showing us that they're racing to get this to market before Apple. This time, Apple may actually get ahead of Microsoft – though only time will tell.

Earlier this month, the U.S. Patent Office published a patent application from Microsoft illustrating their "cellular notebook" concept and how that may implement the idea. It's always a value to see what the competition is up to, especially when it's a long standing Apple concept dating back a decade.

Microsoft's patent application begins with a little patent background to illustrate the need for their invention. They note that smartphones have benefited from access to cellular wireless standards, whereas portable computing devices like notebooks have mainly relied on Wi-Fi. A device that can use Wi-Fi (such as a personal computer, video game console, smartphone, tablet, or digital audio player) can connect to a network resource such as the Internet via a wireless network access point (AP). Such an access point (or hotspot) has a range of about 20 meters (65 feet) indoors and a greater range outdoors. Hotspot coverage can comprise an area as small as a single room with walls that block radio waves, or as large as many square miles, which is achieved by using multiple overlapping access points.

The popularization of portable computing devices such as laptops and tablets has also increased a desire for availability of such devices that are also configured to provide mobile data access, in a manner similar to smartphones.

However, many portable computing devices do not offer a wireless data card configured to access such networks, and options addressing this deficiency often involve cumbersome external modems or an installation process that is challenging for the typical end-user. So there remains significant areas for new and improved ideas for simplified mechanisms by which to connect a portable computing device to 3G, LTE, 4G, CDMA, or other mobile wireless networks.

Computing devices such as tablet computers, laptops, and other smart devices have been increasingly moving toward an all-day everyday reliance by end-users, where users carry their devices through their normal routines and activities, similar to a handbag or wallet.

In addition, the device can be called upon to perform different types of tasks depending on the whereabouts of the user. However, this trend is associated with challenges, as the device is expected to morph in tune with the user's demands at the present moment.

In a work meeting for example, a user may wish to produce a well-kept, professional, or otherwise clean device that is equipped with added functionalities, while at social events the same user may wish their device to showcase their interests, preferences, and/or favorite subjects while simply enjoying various software programs loaded on the device.

There is an increasing need for such devices to readily adapt to modifications in appearance and functionality.

Microsoft's invention covers systems and methods for providing users with simple, quick, and easy to implement changes to device appearance as well as network capability and other provisions.

In different implementations, the following systems can provide a relatively simple means of switching the appearance of their device from a first 'costume' to a second 'costume' while retaining the integrated, seamless feel of the device as a whole.

At the same time, a user can transition from a device with limited connectivity to a device configured to provide high-speed mobile data network access.

Microsoft's patent FIGS. 1A-1E below present a sequence of drawings illustrating an example of a computing device and a pair of interchangeable housing panel components, where one of the components provides cellular modem functionality Microsoft's patent FIG. 1C illustrates where a second lid could provide users with cellular connectivity. Microsoft states that the notebook #120 can be configured to receive the cellular data module #142 via a receptacle port #140 formed in the base portion of the notebook.

As a general matter, the cellular data module can be understood to comprise a type of electrical connector with contacts for providing power and exchanging data with the computing device. The cellular data module #142 can be snugly received within the receptacle port #140, and become a fully functioning cellular modem for use by the notebook.

Microsoft patent application was filed back in May 2019 and was published earlier this month by the U.S. Patent Office.