In a newly posted report by Canalys today that was mistakenly dated "February 22, 2020, we learn that PC market shipments grew a stellar 12.7% in Q3 2020 to break a 10-year record. The chart below proves that out. 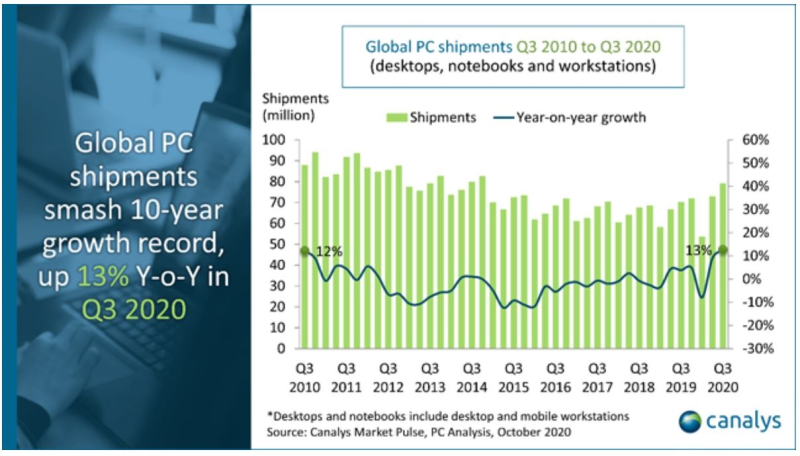 Due to COVID-19 conditions, many companies have allowed their workforce to work at home and communicated via Zoom and equivalents. Some schools remain closed forcing students to take online classes. Both companies and parents have had to upgrade computers to work better, faster and more secure online. This negative worldwide pandemic has created a once in a decade blitz for PC makers. 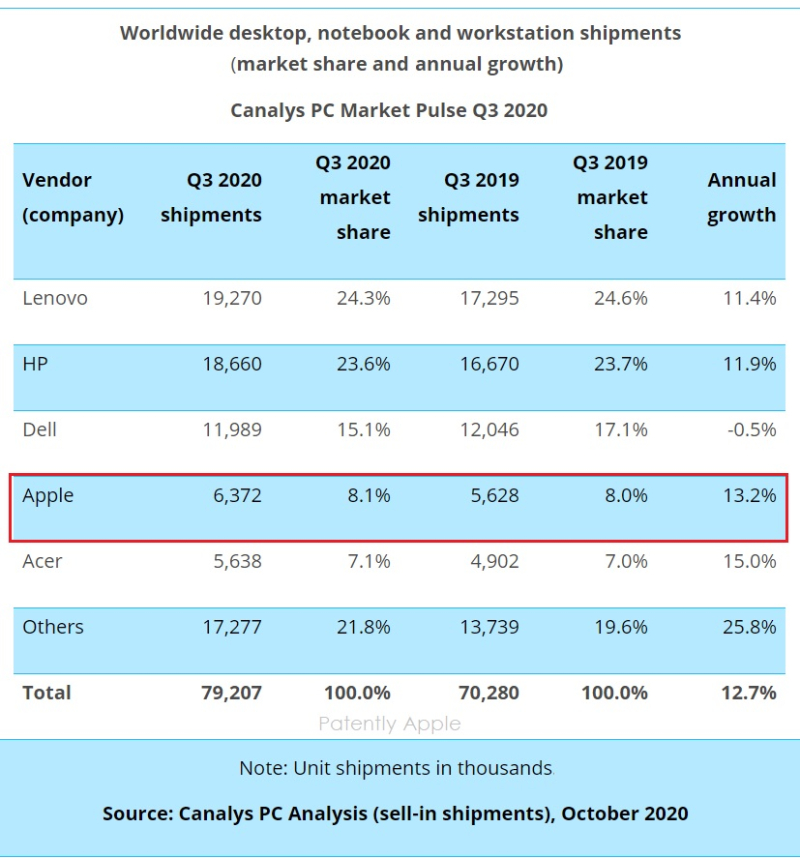 While Apple's standing in the top five PC vendors chart was only number four, their annual growth came in at a handsome 13.2%, beating Lenovo and HP who grew at 11.4% and 11.9% respectfully. The only real loser for the quarter was Dell who experienced a 0.5% decline in growth.

Shipments of notebooks and mobile workstations grew 28.3% year-on-year. This contrasted with desktop and desktop workstations, which saw shipments shrink by 26.0%.

Ishan Dutt, Canalys Analyst: "Vendors, the supply chain, and the channel have now had time to find their footing and allocate resources towards supplying notebooks, which continue to see massive demand from both businesses and consumers.

Dutt added that "Canalys expects IT expenditure, including investment in PCs, to be a core driver of economic recoveries in the aftermath of the pandemic."

Rushabh Doshi, Canalys Research Director: "The lasting effects of this pandemic on the way people work, learn and collaborate will create significant opportunities for PC vendors in the coming years as the line between work and home lives is increasingly blurred.

Doshi added that "beyond the PC itself, there will be an increased need for collaboration accessories, new services, subscription packages and a strong focus on endpoint security. These trends will most benefit vendors who provide holistic solutions that enable their customers to make structural changes to their operations."

No one does holistic better than Apple and is likely why there's been such a sharp increase in Mac sales.

Doshi expects the holiday season to bring even more joy to PC vendors as consumers will use this opportunity to focus more gifts towards new PC's and peripherals.

What will help the PC market grow even faster is 5G speeds and the wireless carriers seem to be failing to deliver what they once promised would be here by now. Hopefully 5G will make new strides in 2021.