Home Archives Contact Us Subscribe Twitter MeWe Facebook Patently Mobile
Apple's iPhone 12 Event in 4 Brief Videos, the Full Keynote & a Series of Jumbo Images
Before Diving into the tiniest of details of the new iPhone 12 models, take a look at a Quick Comparison of the new models Yesterday Apple introduced the all-new Mac mini and with it a whole new advancement for the Smart Home. In the video segment from the keynote for this product below that starts exactly as Bob Borchers, VP Worldwide Product Marketing, we learn about the "Brains of your Smart Home," according to Borchers.

More specifically, Borchers in describing HomePod mini he stated that "As our homes become smarter, you want it to serve as the brain of your smart home orchestrating and controlling a wide range of devices."

Siri on HomePod mini is able to distinguish which member of your family is talking to it, explains Yael Garten, Director, Siri Data Science and Engineering, by using voice recognition, which is considered a biometric. This was described in one of Apple's patents that we recently covered that we touch on below.

Gartner further noted that with "HomePod mini, we've made the smart home simple. HomePod mini automatically integrates with the Home app so that you can control all of your HomeKit accessories with just your voice. You can ask Siri to turn down the heat, lock a door, dim the lights or even set a scene.

Gartner then introduced one of HomePod mini's key features called "Intercom."  This feature was first described in another recent patent report that is pointed out below. This is an intercom on steroids.

Intercom lets you quickly send a message from one HomePod mini to another in a different room or to multiple rooms throughout your home. Apple shows an example of Dad saying "Hey Siri, tell everyone, 'We're late. Let's go!" That message is then routed to all HomePods in your home to get Dad's message out to all. Individuals could reply to let Dad know their status.

Yet what's really exciting, states Gartner, is that they've take Intercom a step further and designed it to also work with your iPhone and CarPlay that no other smart speaker could do.

Prosser tweeted late yesterday that the HomePod mini & the new Apple TV will both act as UWB base-stations. The devices will precisely track your location as you walk inside house with other U1 devices. 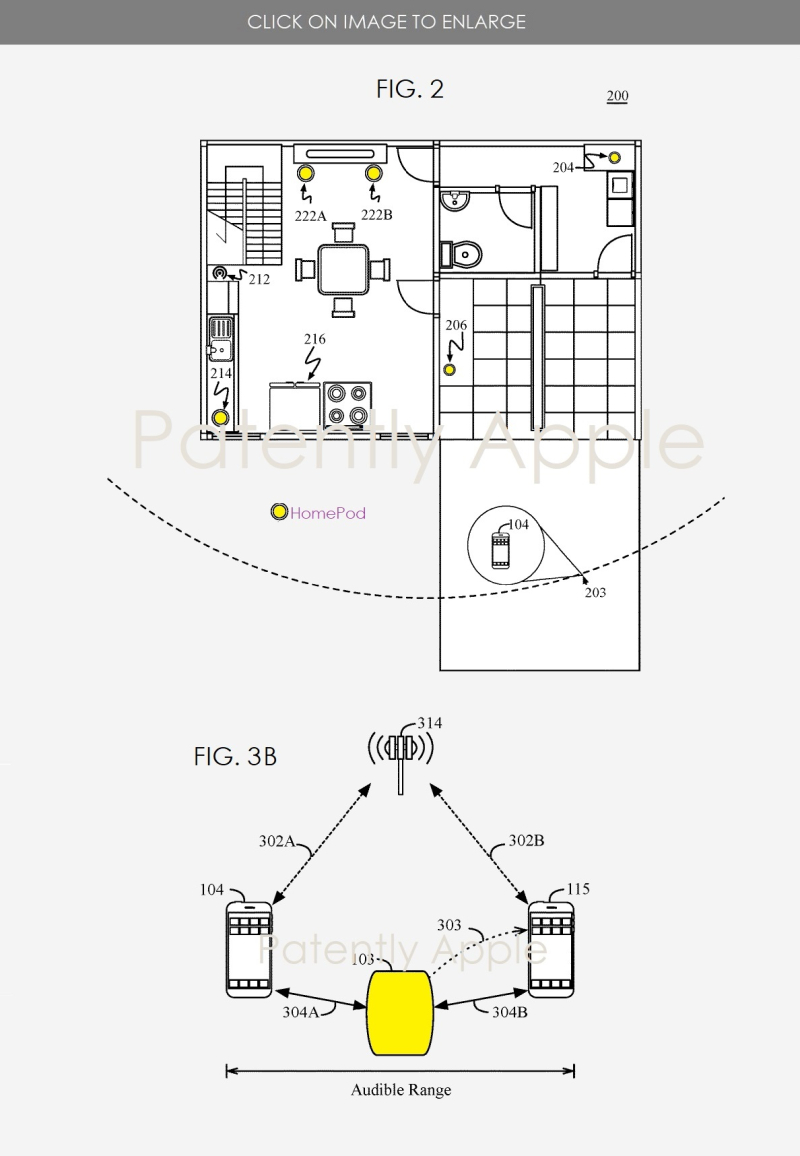 Another series of patents that went from paper to life during the Apple event yesterday. No matter how many years I've been at this, it's always a thrill to witness patents coming to life. The good news is that some of what HomePod mini introduced will get more sophisticated as time goes on and this is where the patents could provide us with some clues.

In the future Siri will be able to know who to send a message to on an iPhone if two people happen to be side by side. It will be able to distinguish an individual in the home by using advanced biometrics like a heartbeat signature that a a 60 GHz millimeter wave sensor (MWS) system on your iPhone will be able to communicate to Siri.

Apple also envisions adding a means of creating virtual "tripwires" within a home using beacons and other smart devices in the home. It also discusses how a future version of Apple TV will work as a second major smart home device that could act as a smart hub.

So even though a patent has been fulfilled by coming to market, it could also mean there's more of a patent that could still play out over time. A patent, many times, will provide the vision of a project that Apple's engineers are tackling and they introduce it to market in stages. That's the fun of discovering and following Apple's patents.