Yesterday the US Patent & Trademark Office published a continuation patent from Apple relating to implementing close-to-invisible microperforations that form notification areas with interactive buttons on future Apple devices such as an Apple Watch which is the focus of this latest continuation patent filing.

The redesign would require replacing its current metal casing with one that is made of a glass or glass-like material ("plastic, glass, carbon fiber, ceramic, or other materials") that would accommodate the "close-to-invisible microperforation" concept as described in the original founding patent and its granted patent.

Yesterday the U.S. Patent Office published a continuation patent from Apple that adds new patent- claims to further protect their invention. The products that their invention could relate to overall is illustrated in their patent figures below. 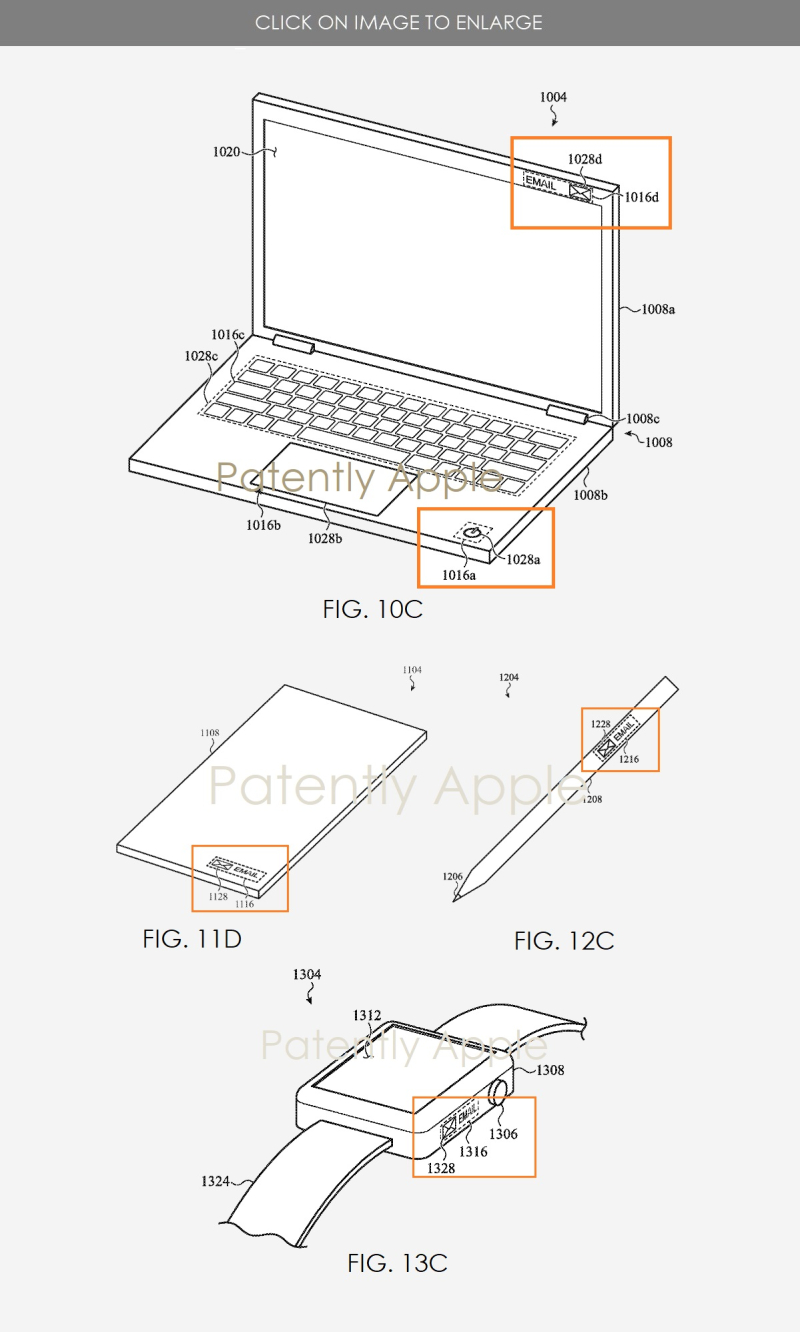 Apple's patent FIG. 13C above illustrates an Apple Watch. Yesterday's continuation patent added new patent claims focused on the device being an Apple Watch as noted specifically in patent claim #5 below as follows:

Patent Claim #5. The electronic device of claim 1, wherein: the wall defines a portion of a watch body having a first opening and a second opening; the electronic device further comprises: a display positioned within the first opening; and a crown at least partially positioned within the second opening; and a graphical output of the display is responsive to: a rotation or translation of the crown; and input received along the input region.

Another claim that stood out from those of their first granted patent was claim #9 that appears to be describing a possible new Apple Watch design that may not include a metal case but rather an "opaque masking layer" which isn't about metal.

The patent claim seems to be describing an area below the glass display that will appear to be a darkened glass that will be able to be lit in certain configurations via an array of microperforations to form buttons that could be symbols or words like "email" as shown in FIG. 13C above.

Apple's invention describes how different haptics could be used to notify a user of a new email, message or, phone call was made. So, if it's an email, as our cover graphic illustrates, a new illuminated button will be formed on the side of the Apple Watch that the user could force touch (press) to bring the email up on the Apple Watch interface. It could also be a symbol such as to notify a user that the Apple Watch batter is low and needs recharging.

You could review Apple's continuation patent 20200333897 claims here should you wish to seek out more patterns of how the microperforation are to work on this updated Apple Watch design.