Earlier this month the US Patent & Trademark Office published a patent application from Apple relating to Beats Earphones. The patent reveals new health sensors being considered for these earphones. One of the inventors of this patent is Duy Le, Apple's Senior Product Design Manager for Beats products. He's been with Apple for over 8.5 years with no history back to Beats, according to his LinkedIn profile.

The history of Apple working to bring biometric sensors to AirPods goes back to 2015 when they filed for the patent which was made public in 2017 in our report titled "Apple Continues Work on Future Sports Oriented AirPods with Biometrics & Noise Cancellation Features." Obviously noise cancellation came to market first with AirPods last year.

Our 2017 patent report covered patent figures illustrating both AirPods and one design having ear clips like the current Beats earphones have. So, Apple has at least a 5 year history of working on bringing biometrics to various kinds of earphones, especially a PPG sensor. In today's patent report we cover Apple wanting to bring this sensor to Beats earphones.

Apple's patent states that an apparatus well suited to securing an earpiece within a user's ear is a key design feature for earpieces intended for use during exercise or other active goings-on. However, when securing mechanisms makes the earpieces uncomfortable to wear, the user will not get the maximum amount of utility from the earpieces since it will be harder to wear the earpieces for extended amounts of time, thereby negatively impacting the user experience. For example, a securing mechanism that presses the earpiece against sensitive portions of the ear can cause significant pain to a user making extended use of the earpiece unmanageable at best.

One solution to this proper fit issue is to optimize a design of the earpiece so that an overall shape of the earpiece conforms to as many internal features of a user's ear as possible.

Apple's patent FIG. 1A below shows an iPhone working with wired or wireless Beats earphones; FIG. 1B shows an earpiece positioned within an ear of a user. 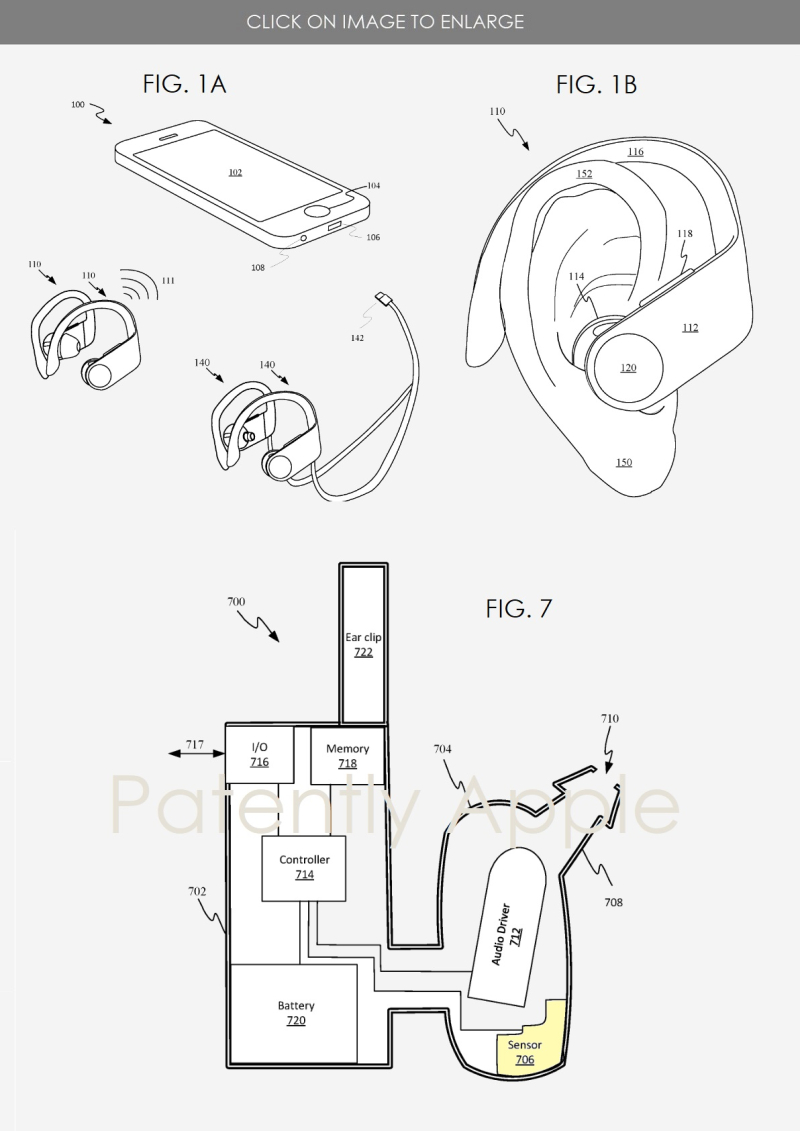 Apple's patent continues to dive deeper into the design and ergonomics of the earphones with its ear hook design providing a superior grip on the ear so that a user is able to perform a workout without fear of the earphones easily falling out of their ears.

Where there's a break in the patent away from the design elements, Apple reveals that a future version of the Beats earphones could be fitted with new sensors that are in the earpiece as noted in FIG. 7 above as area #706.

In an Apple press release in 2019 they stated: "The two main health sensors in the Apple Watch series 4 are an enhanced PhotoPlethysmoGram (PPG) and, for the first time in an Apple watch, an ECG." Now Apple is working on a miniature version of this system for the Beats earphones.

Under patent FIG. 7, Apple states that in some embodiments, sensor #706 can take the form of a photoplethysmogram (PPG) sensor. A PPG sensor utilizes a pulse oximeter to illuminate a patch of skin and measure changes in light absorption of the skin.

By capturing wave forms associated with the cycling profusion of blood to the skin, multiple biometric parameters can be collected including, for example, heart rate, blood volume and respiratory rate.

By using LEDs that emit different wavelengths of light additional data can be gathered such as, for example, VO.sub.2 max (i.e., the maximal rate of oxygen absorption by the body).

By arranging sensor #706 in the depicted position with respect to driver housing (#704), the sensor can be placed in close proximity to a user's ear, thereby allowing sensor readings made by a pulse oximeter.

In some embodiments, the sensor can take the form of a core temperature sensor.

Other embodiments of the sensor include embodiments in which the sensor takes the form of an electrode. When the earbud is a wired earbud electrically coupled to another earbud with an electrode, the electrodes can cooperatively measure a number of different biometric parameters. In some embodiments, the electrodes can be configured to measure the galvanic skin response (GSR) of a user. A GSR can be useful in determining an amount of stress being experienced by the user at any given moment in time.

In some embodiments, the electrodes can be used to measure more detailed parameters of the heart rate by when the electrodes are configured as an electrocardiogram (EKG) sensor or an impedance cardiography (ICG) sensor.

Apple's patent application number 20200314518 was published on October 01 and filed back in Sept 2019 or one month prior to Apple releasing their AirPods Pro with active noise cancellation.