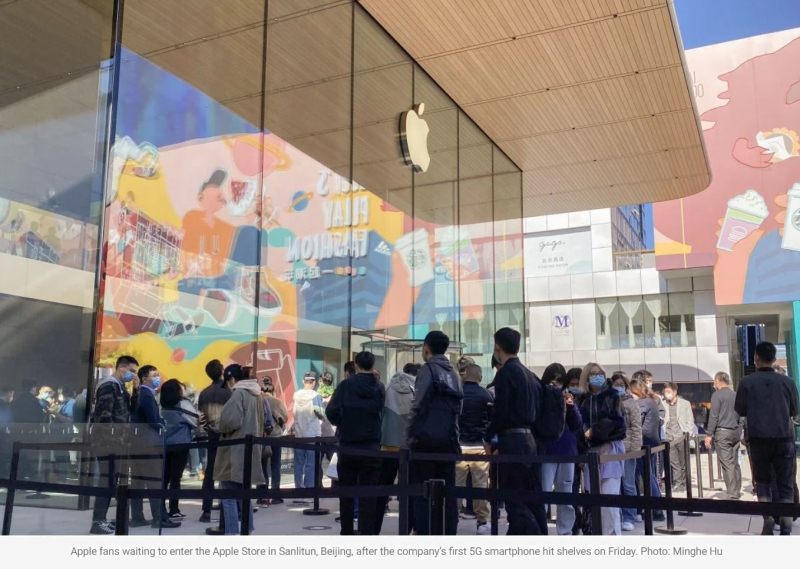 Early this morning we posted a report titled "Apple's iPhone 12, iPhone 12 Pro, and iPad Air are now on Sale with First Photos from Singapore's Apple Orchard Road Store." Apple noted that they would update their photos from other stores around the world over the next 24 hours. While we await the new photos, we could be sure that Apple could show photos from their downtown store in Beijing China.

A report from Hong Kong today wrote: "When Apple’s new iPhone 12 series smartphones went on sale worldwide on Friday, many people in China were already standing ready. Even by lunchtime, a line snaked outside Apple’s flagship shop in Beijing, located at an upscale shopping center in Sanlitun.

It is a testament to the continuing power Apple has to draw in Chinese consumers even as tensions with the US have intensified.

One man standing outside the store with an Apple bag had already bought several iPhone 12s and was reselling them for a steep mark-up. He said the store had been crowded since 8am.

The shopping stated: "Most of them [waiting in the early morning] were people who had reservations for the new phones. It’s very popular and people need to pay an extra 1,000 yuan to get the phones from me." For more, read the full South China Morning Post.