On Monday Patently Apple posted a report titled "New Samsung Patent Filings Reveal Larger Tri-Panel-Like Foldable Devices with Dual Hinges may be on the Horizon." Beyond the tri-panel focus of Samsung's patent, they also pointed to delivering audio through the display instead of dedicated speakers.

Apple has been working on this since 2012 and Sony and LG have actually brought this feature to market on TVs and notebooks. Patently Apple posted a patent report on Apple updating this invention in a September report titled "Apple updates a major cover glass invention that reveals close-to-invisible apertures that could act as a device speaker & more."

In late September Patently Apple posted another report titled "Apple Wins a Patent for a future iPhone with Under Water Imaging Capabilities in up to 60 Foot Depths."  If Apple is to ever offer a future iPhone that could allow snorkelers to take photos under water at depths of 60 feet, then traditional speakers will have to be eliminated as well as traditional ports replaced by magnetic connectors that will eliminate water from entering.

Though for this report, the point is that both Apple and Samsung are continuing to work on bringing audio through the display in the future.

Yesterday Samsung was granted patent 10,811,470 for a display of a standard smartphone being able to deliver audio through vibration under and through the display.

In Samsung's patent FIG. 1 below, we're able to see a display device that includes a vibration member #50 disposed under the display panel. 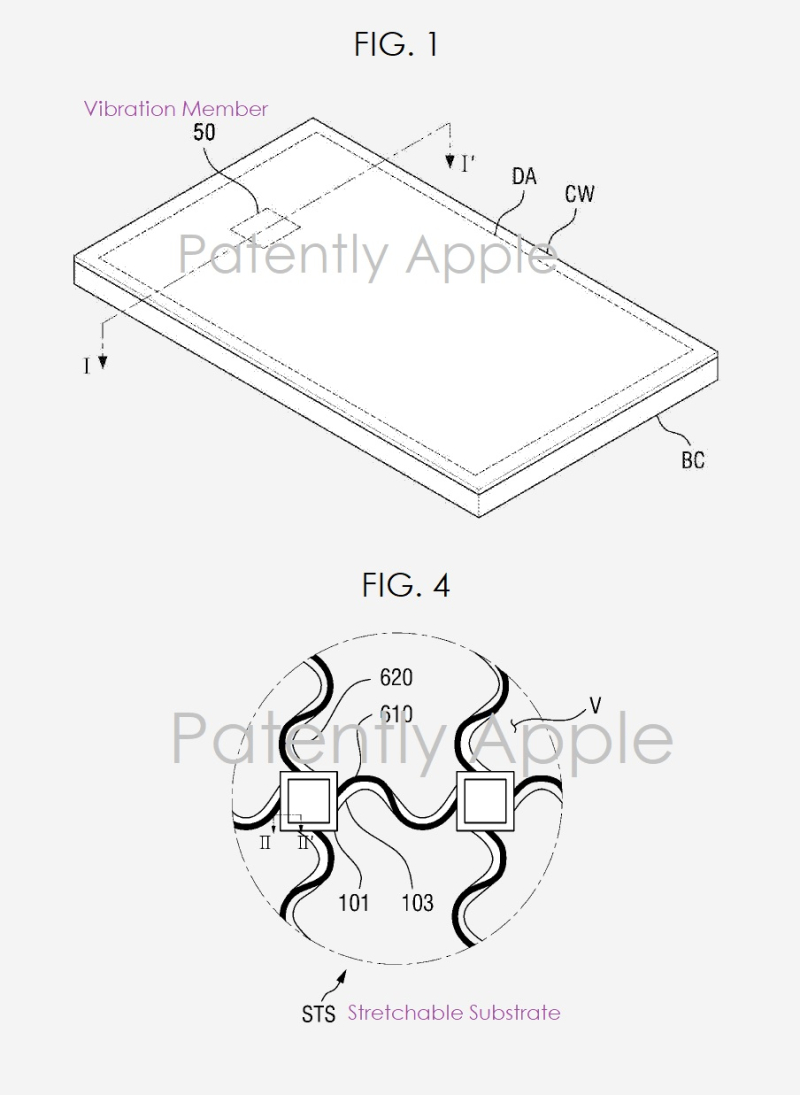 More specifically, the vibration member #50 can transfer sound. Samsung adds that "call quality and quality of sound transferred through vibration may be improved." Samsung considers such a display  a "stretchable display" using a stretchable substrate (STS).

The patent further notes that the sound provided from the vibration member #50 can be transferred within the display device and to a user without loss.

Samsung's patent is rather subdued in that it seems to be thinking of specific applications for the audio vibration unit like providing phone call quality and general audio perhaps as an added speaker. It never enforces the idea of it being the sole means of audio.

There's no doubt this could be a trend to keep an eye on. Apple may, in the end, limit this kind of audio-through-display to a single future iPhone for water enthusiasts considering that the iPhone 12 just introduced Ceramic Shield. On paper it would seem that these two display technologies are opposed to each other. Then again, Apple could deliver such a solution on future Macs and iPads.

For the record, LG has actually introduced this technology on their G8 ThinQ Flagship smartphone. A part of a Verge review video talks about this feature called "Crystal Sound OLED" and the video will begin at that point below. Once that segment is over you could stop the video. This will give a quick peek at how LG has brought this new audio advantage to a smartphone.

LG appears to be using this kind of audio like Samsung is proposing (or copying LG is more like it) in that it's for better call quality and a boost for it's one main speaker for bass. LG calls their vibration unit "The Exciter" as noted below. 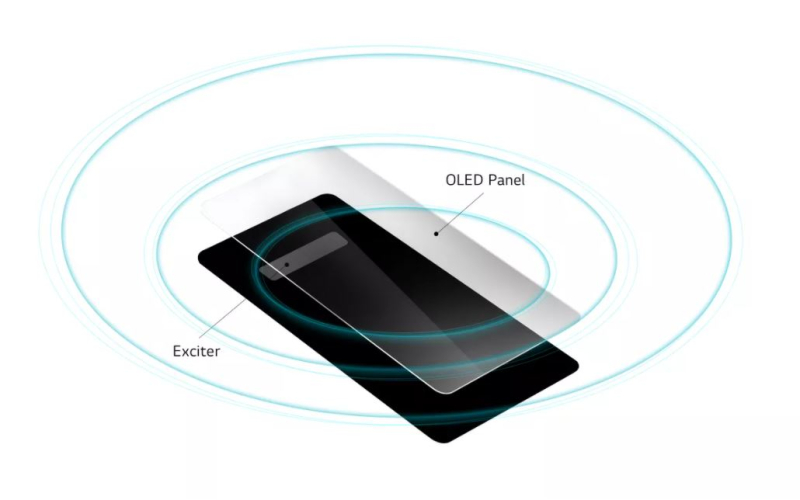 Should Apple proceed with their patented concept of audio through the display in the future, it's unknown at this time whether they'll use a fully home-grown solution or work in coordination with their supply partner LG Display.