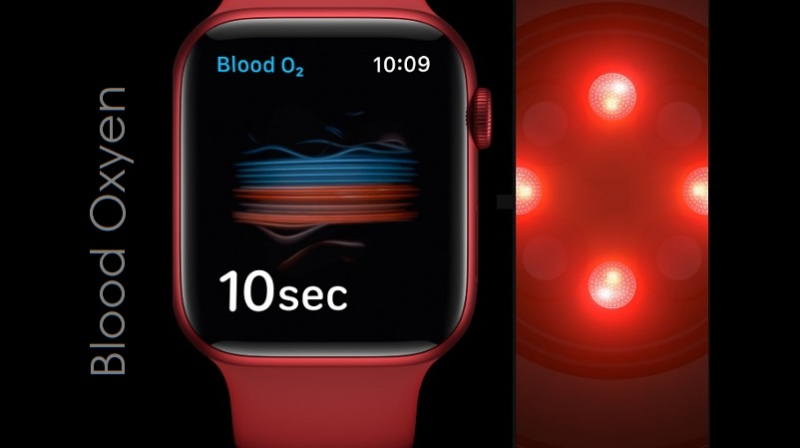 Three months prior to launching Apple Watch Series 6 Apple was granted their first Apple Watch patent that covered the feature of relating to measuring Blood Oxygen levels. The very same week that they were granted this patent, Apple's engineers filed a continuation patent that was made public today by the US Patent & Trademark Office.

The Blood Oxygen sensor for Apple Watch was introduced at Apple's event in mid-September. The video below begins as Apple's COO Jeff Williams introduces the new sensor for the Blood Oxygen feature. You could finish the video when that segment is over.

Apple states that wearable devices like Apple Watch are capable of obtaining PPG signals by employing a PPG sensor array configured to control or preferentially accept light associated with a high level of pulsatile signal, which generally correlates to a high or maximum perfusion index value. Apple Watch may include a housing structured for attachment to a body region of the individual, the housing comprising a PPG sensor array, the PPG sensor array comprising an illumination system and a detection system; and a processor within the housing configured to analyze a PPG signal obtained from the detection system and determine the physiological parameter.

The illumination system may be configured to project light to a tissue layer within the body region, and the detection system may comprise a viewing component configured to receive light reflected from the tissue layer at a preset viewing angle associated with a PPG signal having a high level of pulsatile signal. In some instances, the viewing component is also configured to block (or reduce passage of) light having a substantial amount of non-pulsatile signal artifact.

Some variations of the wearable devices comprise a housing having an upper surface, a back surface, and side surfaces; a PPG sensor array within the housing; and a processor within the housing configured to run an algorithm using information obtained from the PPG sensor array to determine a physiological parameter, e.g., heart rate, oxygen saturation, etc., of an individual.

A viewing component coupled to the PPG sensor system and/or housing may facilitate the transmission of light to the photodetector at certain viewing angles that are associated with a high perfusion index. The light received at these viewing angles may be used to obtain PPG signals that may then be employed to provide data related to a user's heart rate or oxygen saturation. 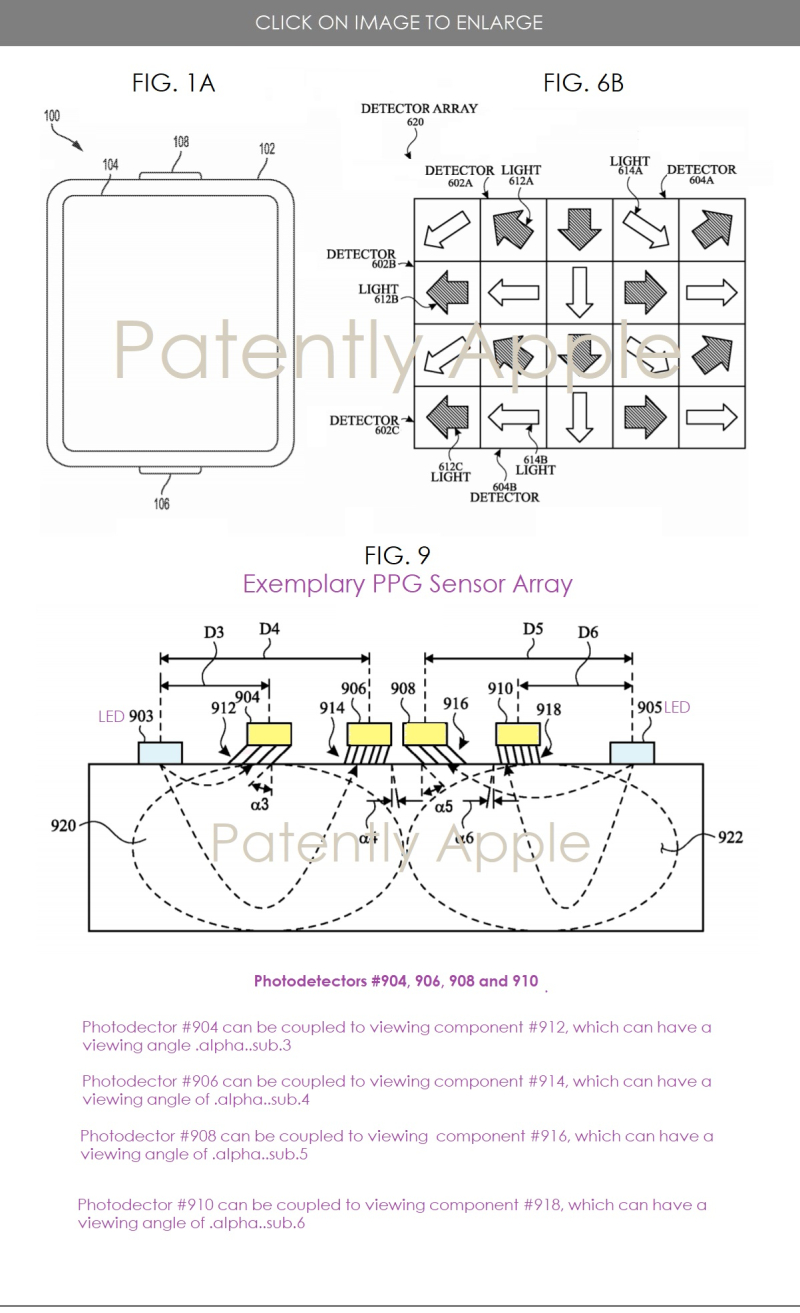 Being that today's patent is a follow-up patent filing or a "continuation patent," Apple has added additional patent claims to protect their Blood Oxygen feature.

Apple's patent paragraph #80 delves into this aspect of the invention. One segment of that paragraph reads: "A wearable device for monitoring a physiological parameter of an individual is disclosed. The wearable device can comprise: a housing having a skin-contacting surface; one or more light emitters located to emit light from the skin-contacting surface; one or more light sensors, wherein each light sensor is configured to detect light that has interacted with a tissue region of the individual at one or more preselected angles of incidence."

Apple's continuation patent 20200315473 titled "PPG Sensor Having Light Arrival Angle Control at Detector," that was published today by the U.S. Patent Office was originally filed back in June. To review the new 20 patent claims in full, review the continuous patent here.

While I  had heard of measuring blood oxygen levels on medical TV series over the years such as Grey' Anatomy, House, The Resident, The Good Doctor etc.,  for the most part it went in one ear and out the other like dozens of other medical terms I've heard until Apple began including it in some of their new Apple Watch and Apple Watch band patent filings.

Then on Friday the U.S. President was flown to the Walter Reed National Military Medical Center after testing positive for COVID-19. One of the President's vitals that was concerning his personal physician, Dr. Sean Conley, was the drop in the President's blood oxygen levels from 98 to the low 90's. It was the best free advertising for the new Apple Watch feature money that money could buy. Measuring blood oxygen levels was thrown into the spotlight – big time, as an important health trigger to watch for.

While COVID-19 is still with us, it's another tool for consumers to have in knowing when to go to the hospital if COVID is suspected. People should watch for a new persistent cough, a rising fever and now measuring blood oxygen levels. The timing for bringing this feature to market couldn't have been any better.