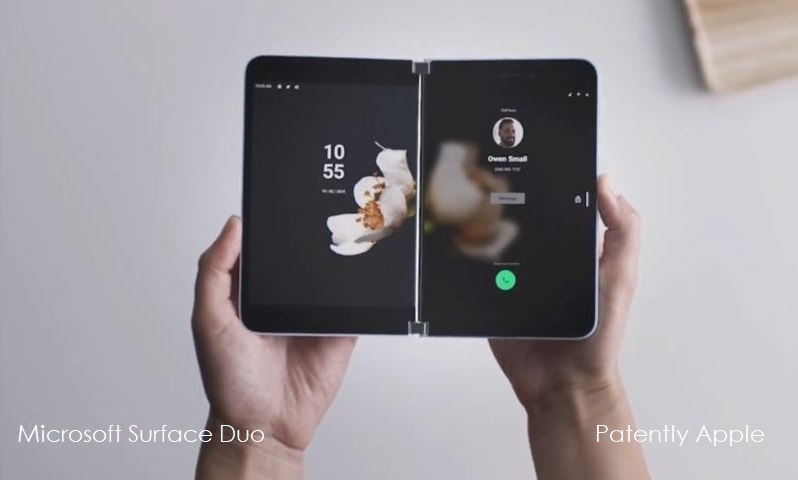 On August 12th Patently Apple posted two reports on Microsoft announcing that pre-orders for the new Surface Duo smartphone started that day and that the product would go on sale in the U.S. via the Microsoft Store, Best Buy and AT&T on September 10th.

I've been a fan of Microsoft's dual display category that has now started with a dual display smartphone this year and a dual tablets device debuting next year called the Surface Neo. As Marques Brownlee says, Microsoft is on to something here. The idea is right but they need more developers to setup their apps to take advantage of the Duo's cool feature of placing an app in between the displays that triggers the app to enlarge to be on both displays.

Below is Marques Brownlee's full review of the Microsoft Surface Duo. It's brutal, no two ways about it. But that's fine because I think most expected the first generation of this concept to grade an D-. I think that Microsoft wanted to get the ball rolling and get developers to brain storm and come up with new types of apps and apps like Spotify and Facebook to come up with truly unique apps taking advantage of the dual displays.

A second review that's presented below by The Verge is a little more hopeful for the device's future as I am, but still honest in saying it's not ready for prime-time at $1400.

Lastly, there's the video review from Windows Central that I think was the most fair, even if he agrees with most that it's definitely an "early adopter" device that could take a year or two to iron out the initial bugs. The concept is well appreciated and you can tell that the reviewer, executive editor Daniel Rubino,  really loves this form factor and is seen as enthusiastic about the Surface Duo.

If you have money to burn and just want to be a part of Microsoft's in-crowd, then I think you could live with the Surface Duo while Microsoft works out its many initial bugs that's expected from a first-gen device.  I fully expect Microsoft's Surface Team will be delivering a steady stream of updates between now and the New Year. And let's face it, it's a hot device compared to the ugly and rather thick Samsung Z Fold2. With 2 displays, the Duo is much thinner and cooler than those other foldables, end of story.

With that said, I believe that Microsoft has a winner on its hands for professionals, those in sales and real multitaskers in general but not in the same scope as the iPhone. For this year, Apple's 5G iPhone 12 will be the killer smartphone on the market.

While the Surface Duo is unlikely to ever Challenge the iPhone, I do believe they could build themselves a strong niche to make it a minor force in the enterprise space over time.

Just as the Surface Duo went on sale today, an iffy rumor surfaced from a leaker known as "Ice Universe." While it's true that Apple does in fact have a large pool of foldable display patents on record, it doesn't mean that every rumor about this new category of product has validity. MacRumors did deliver a nifty graphic as illustrated below, but it's photoshopped and not part of the originating rumor. 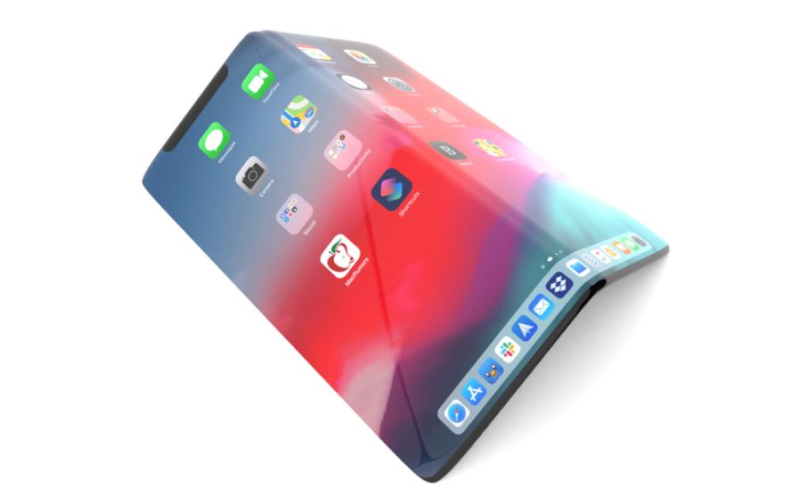 It's very difficult to take a rumor too seriously when the link to the rumor goes to homepage of Weibo with no mention of this rumor. How about a screenshot of the rumor then … no? Not linking to a rumor is okay too. Sending interested people to a dead end site is a waste of time.

Knowing that Apple's CEO is not big on experimental products, I'd say that it's way too early for Apple to be taking this category too seriously. All of the single-display form of foldables on the market today, in my view, are losers, especially at US$2,000. Give me a break – ha!

At least Microsoft has a real product on the market today and even with its first-gen foibles, it's potential is much greater than other foldables on the market that  are  based on folding a single display.  In the big picture, the public likes the  concept and once the price breaks to $999 and the problems ironed out, it's a category that will begin to gain momentum.  It's at that point where we may see Apple bang the drum that they're interested in entering the race.

In the short term, Apple appears to have their sights on AR smartglasses and a full blown HMD. This is where the momentum is as far as patents go by a very wide margin.