Home Archives Contact Us Subscribe Twitter MeWe Facebook Patently Mobile
Apple Watch Sailed Past the entire Swiss Watch Industry in 2019 and Apple is set to expand that Lead in 2020 with a Fresh new Line-Up
With the Deadline of Sept. 20th Fast Approaching, TikTok makes a Last Minute Proposal in the hopes of Avoiding a Total Ban 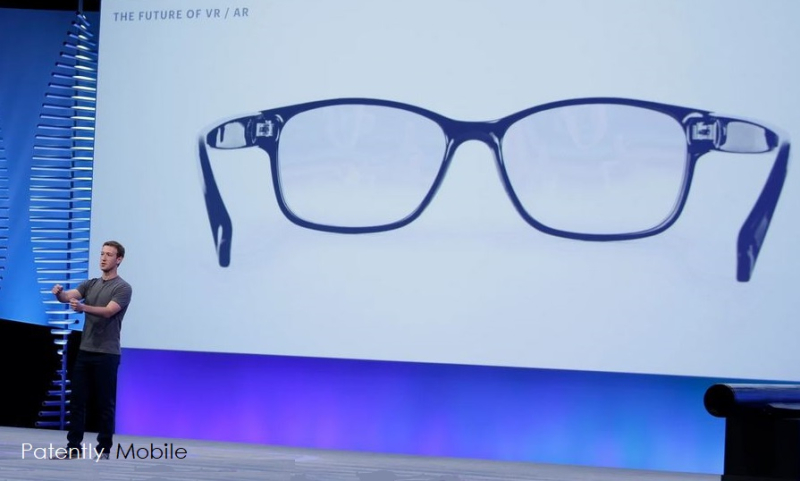 Yesterday Patently Apple posted a report titled "Google wins a patent for future Smartglasses in the hopes of beating Apple to Market." The report noted that both Google and Facebook are in a race to beat Apple to market with viable AR Glasses. Yesterday's report presented you with a recent Google patent covering smartglasses and today we'll point you to a recent Facebook patent focused on their future AR Glasses.

Facebook made it clear last December that that they're currently developing their own  operating system for their AR Glasses. They apparently have little to no interest in designing glasses that work with Android. And with Facebook's recent whining about the App Store stopping their innovation, it's about time that they create their own platform that they could control instead of bitching about the App Store. Be gone already.

Facebook knows that they missed out on the smartphone revolution and want to make sure that they can win a segment of the global market away from iOS and Android. Facebook believes that smartglasses will be a smartphone replacement device. It could be their chance of finally getting to play in the grownups sandbox.

Facebook's patent which was granted to them in July mid-July 2020 begins with their patent background to explain issues that their invention was design to overcome or improve.

Facebook notes that "An artificial reality system, such as a head-mounted display (HMD) or heads-up display (HUD) system, generally includes a display configured to present artificial images that depict objects in a virtual environment. The display may display virtual objects or combine real objects with virtual objects, as in virtual reality (VR), augmented reality (AR), or mixed reality (MR) applications. For example, in an AR system, a user may view both displayed images of virtual objects (e.g., computer-generated images (CGIs)) and the surrounding environment by, for example, seeing through transparent display glasses or lenses (often referred to as optical see-through) or viewing displayed images of the surrounding environment captured by a camera (often referred to as video see-through).

In general, the FOV and the eye box should be as large as possible, the resolution (e.g., the total number of pixels or angular resolution) should be as high as possible, and the brightness of the displayed image should be high enough (especially for optical see-through AR systems).

For example, the eye box should allow for pupil movement caused by environmental use of the system (e.g., rotation of the eye and shift of the AR system), and allow for comfortable viewing of a large FOV with a desirable resolution.

HMDs that provide only a small eye box may substantially impair the user experience, because the CGI images can be impaired, or even disappear from the user's vision, with a slight bump of the HMD or eye motions. However, increasing the eye box of the system may lead to a larger, heavier, more expensive, and less energy-effective system.

In some embodiments of the near-eye display system, the relay optical subsystem may be configured to collimate light from each area of the image, and collimated light from different areas of the image may exit the exit pupil at different angles.

In some embodiments, the image projector may include an optical image generator at the image plane.

Facebook's patent FIG. 1 below is a block diagram of an example of an artificial reality system environment including a near-eye display. 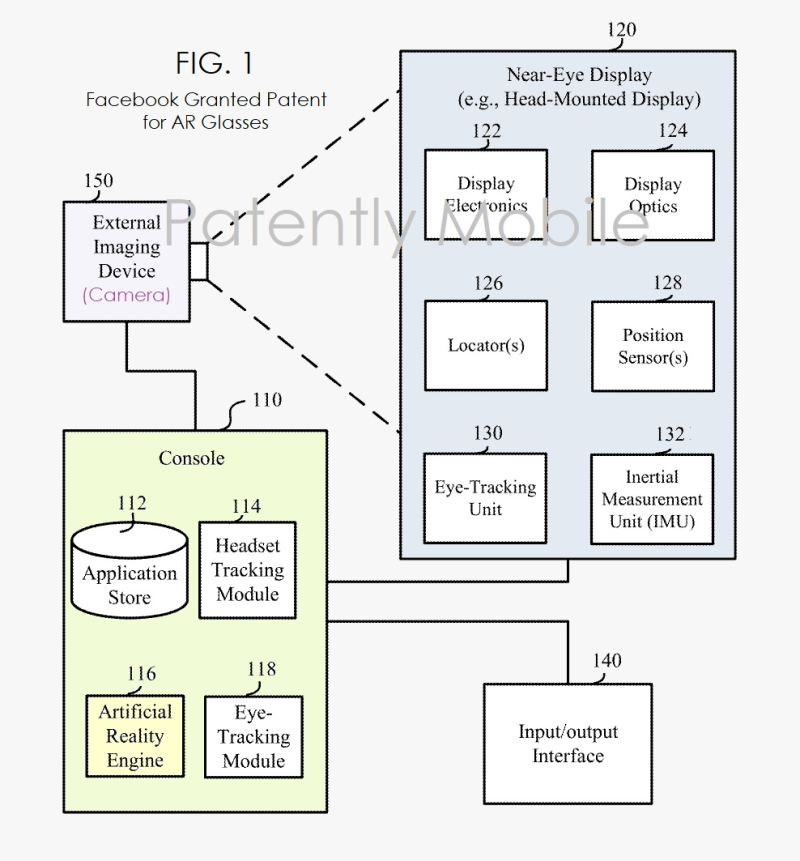 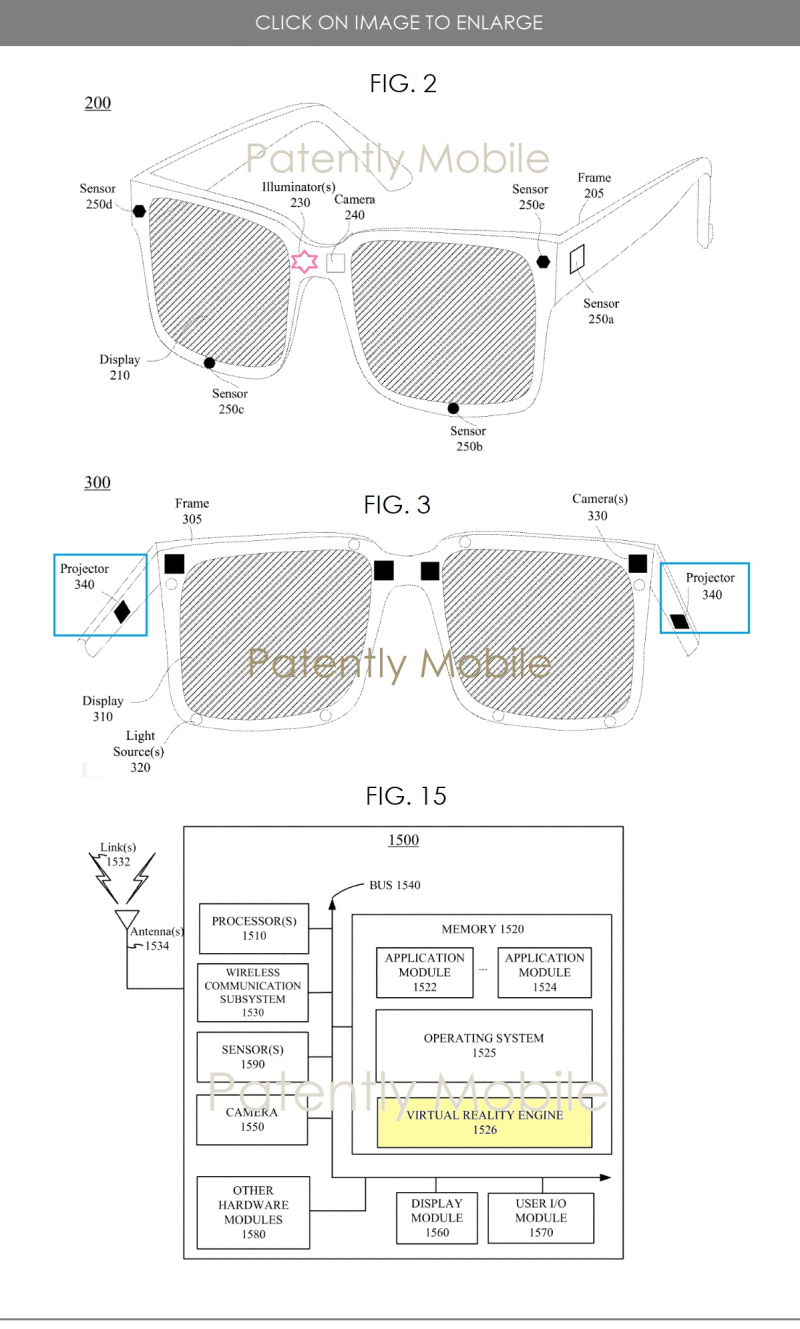 Facebook's patent FIG. 15 above is a block diagram of an example of an electronic system of an example near-eye display for implementing some of the examples outlined in the granted patent.

To review the finer points of Facebook's granted patent number 10,712,576 click here. Facebook originally filed for this patent in October 2018 and published by the U.S. Patent Office on July 14, 2020.