On Thursday the US Patent & Trademark Office published a patent application from Apple that relates to a possible future smart keyboard design wherein users are able to set up a keyboard to their liking based on various factors such as force, tactile peak, audio feedback and more. This keyboard could provide users with a choice of two presets as well as a custom option to control every aspect of the keys. Different resistance levels could set when typing documents or playing a PC game.  This is a very deep patent going into dozens of scenarios and features. Our report provides just a few examples of this possible customizable next-gen keyboard.

Apple notes in their patent filing that although device makers make efforts to make products that are comfortable and effective for a wide range of different types of end users, most keyboards and interface devices are substantially static in their feel and sound once they are in end use.

End-users and third-party sellers are mostly unable to customize and control those factors. What seems like comfortable and satisfying feedback to one user can be deemed completely inadequate (e.g., overly noisy, stiff or mushy) in feel to another. Consumers would rather not have to compromise on their keyboard in a device that otherwise meets their needs.

Accordingly, there is a persistent need for various improvements to the implementation of keyboards and related input devices for electronic devices.

In some embodiments, the feedback configurations could include actuator output settings that affect the sound made when a key mechanism is operated. For example, actuators can be configured to provide various sounds such as clicks or buzzing noises in response to key presses or at certain points along the travel of certain key mechanisms in the device.

In some embodiments, these acoustic elements of the systems could be adjusted without changing the force feedback profile. In some cases, the force feedback profile could cause sounds to be made. For example, a force-displacement curve could have a quieter bottom-out sound if the bottom-out stiffness is low and cushioned as compared to a curve with a high bottom-out stiffness that results in a harsher click or clack at full key travel.

A user with a preference for a quieter or louder keyboard could adjust the keyboard settings to provide less or more noise while typing. Additionally, a device maker could configure a keyboard to make more or less noise as an additional type of operational feedback that can affect the end user's perception of quality and key feel.

For example, a keyboard can have a first feedback configuration including a louder sound output during certain activities (e.g., while typing a document in a word processor, during daytime operating hours, at other times when sound can improve the user's interaction with the device.

A user could have a second feedback configuration including less or softer sound output during other activities like while playing a game, during operation of the keyboard in a nighttime setting, or in other instances where operation of the keyboard could be an auditory nuisance or otherwise less desirable to the user of the device or others nearby).

In this manner, the systems described could be used to control auditory feedback in addition to, or as an alternative to, force feedback.

In patent FIG. 14 below, you're able to see a keymap #1400 in which a set of keyboard keys (e.g., 1402) are positioned. Actuators for each of the keys could be individually configurable or configurable in groups to provide varying types of feedback for the individual keys. 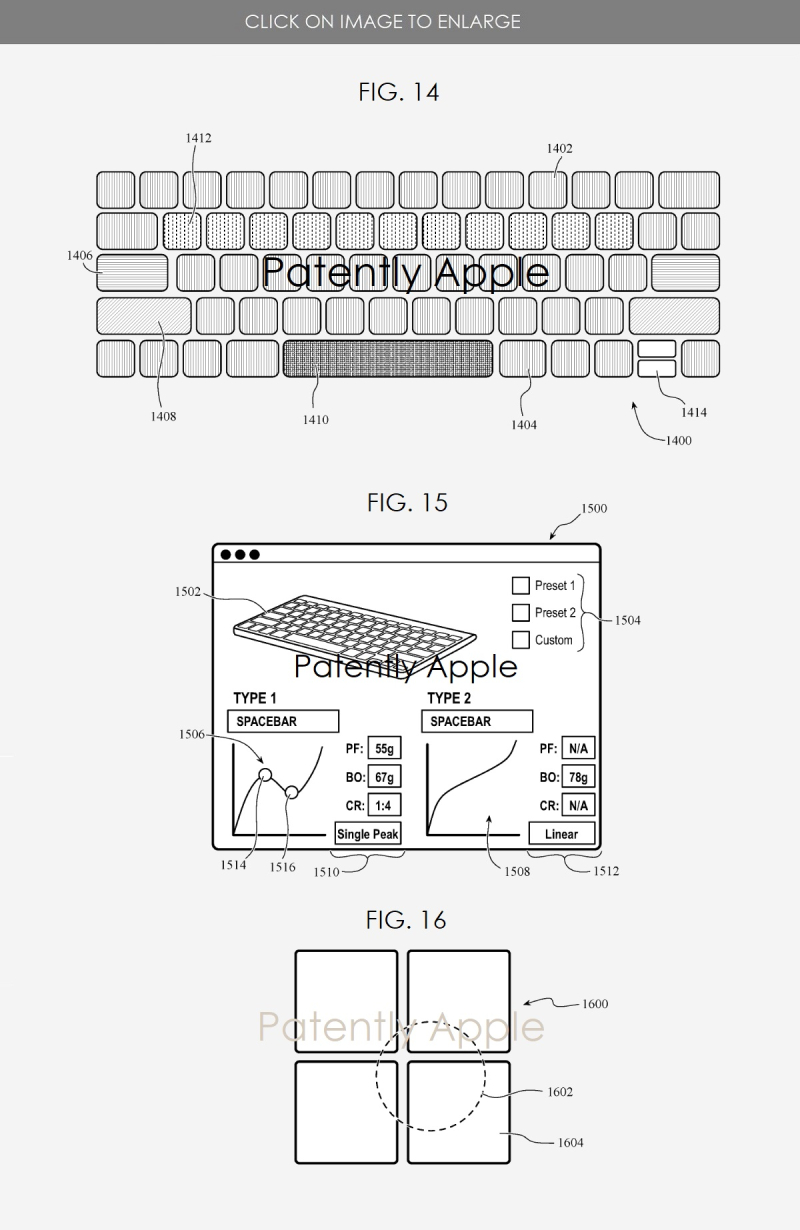 The feedback settings #1504 on the GUI provides users a way to set up two different "Presets" or choose a "Custom" configuration information that could entail various presets and custom profiles for the user to select.

A user could choose a first profile relating to a tactile force feedback and a second profile (e.g., "Preset 2") for a linear or smoother force feedback.

Apple notes that there are times the various systems described could be used to modify operation of individual keys within a set of keys. For example, in Patent FIG. 16 above, we see a diagram of a set of keys (#1600) positioned adjacent to each other in a keyboard. Users providing input to the keys could apply force to the keys with a fingertip that could at times overlap or strike multiple keys simultaneously, such as by a fingertip applying force covering the limits of circle #1602. Each of the keys engaged by the finger could move or receive force in different amounts.

Apple's patent Figures 3 to 8 below present the look of a key model and series of various key mechanisms. The feedback provided by the actuators of the systems are described in connection with FIGS. 2-8 which could be controlled in a variety of different ways and could be controlled to provide various different types of feedback. 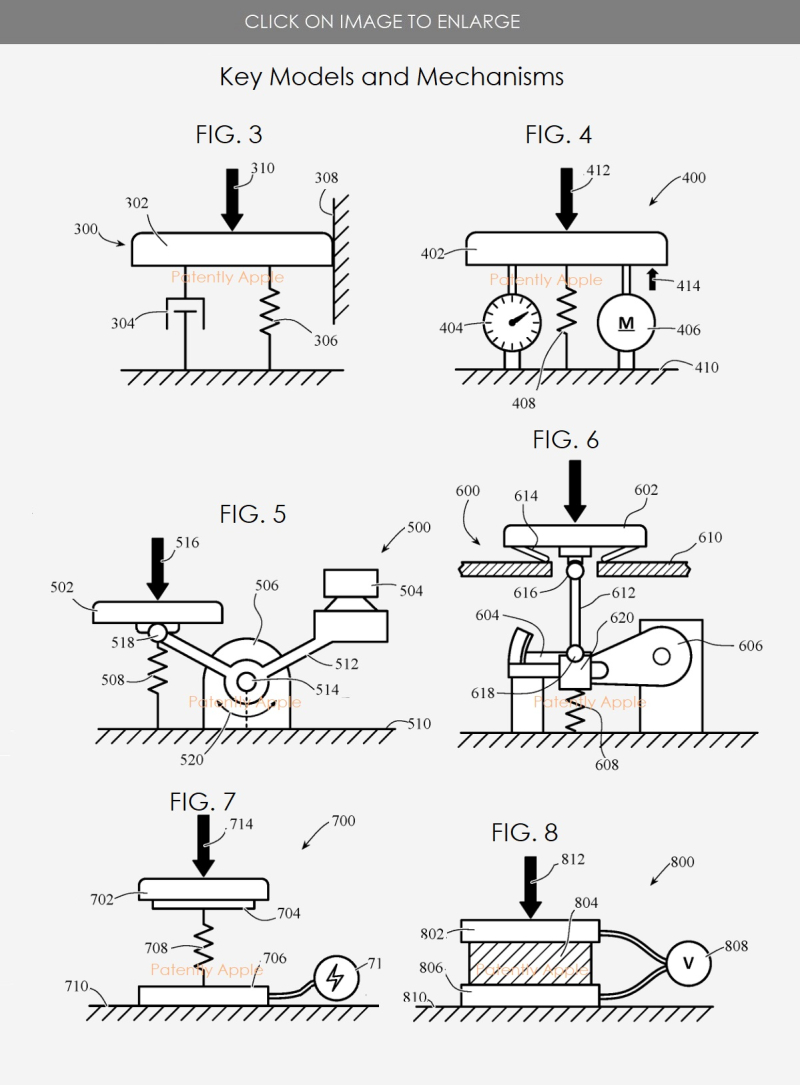 Apple's patent application 20200303140 that was published today by the U.S. Patent Office was filed back in Q2 2019. To dive deeper into this invention, click here. Considering that this is a patent application, the timing of such a product to market is unknown at this time.