Apple, Google, Intel and Cisco File a Complaint in a California Court against the Director of the U.S. Patent Office 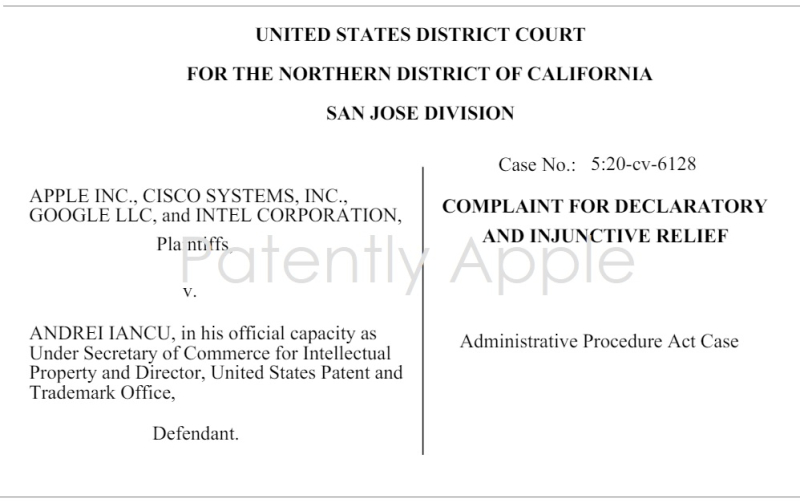 Apple, Google, Cisco and Intel, the plaintiffs have filed a "Complaint for Declaratory and Injunctive Relief" against Andrei Iancu, the Under Secretary of Commerce for Intellectual Property and Director of the U.S. Patent Office (PTO). The Director oversees the operations of the PTO and is statutorily vested with the authority to decide whether to institute IPR of a patent claim.

The plaintiffs are claiming that the U.S. Patent Office under Iancu is not following Intellectual Property Rights (IPR) procedures which were a centerpiece of Congress’s efforts to strengthen the U.S. patent system in the Leahy-Smith America Invents Act ("AIA").

In enacting the AIA in 2011, Congress recognized that innovation is inhibited when invalid patents are issued and then deployed in litigation against technology inventors and developers.

The plaintiffs make the charge that the Director of the Patent Office challenges the AIA with what is known as the "NHK-Fintiv rule," which the plaintiffs claim violates the AIA, which allows IPR to proceed in tandem with infringement litigation.

The following is directly from the lawsuit under the section titled "Introduction with all emphasis in yellow added by Patently Apple to highlight various points:

"This action under the Administrative Procedure Act (“APA”) challenges a rule adopted by the Director of the U.S. Patent and Trademark Office (“PTO”) governing that agency’s consideration of petitions to institute inter partes review (“IPR”)—an administrative proceeding for determining the patentability of previously issued patent claims.

A strong patent system is vital to protecting the massive research and development investments that fuel Plaintiffs’ innovative products and services. And a crucial element of any strong patent system is a mechanism for "weeding out" weak patents that never should have been granted because the claimed invention was not novel or would have been obvious in light of prior art.

Such patents threaten innovation—particularly in the hands of non-practicing entities [also known as Patent Trolls] that use the patent system not to spur their own inventions, but to extract monetary returns by asserting weak patents in infringement suits.

As frequent targets of such tactics, Plaintiffs have a strong interest in having an efficient and accessible means for challenging weak patents that should never have issued to ensure that such patents cannot hamper innovation.

IPR was a centerpiece of Congress’s efforts to strengthen the U.S. patent system in the Leahy-Smith America Invents Act (“AIA”). In enacting the AIA in 2011, Congress recognized that innovation is inhibited when invalid patents are issued and then deployed in litigation against technology inventors and developers. And Congress found existing procedures for challenging already-issued patents, including litigation, to be insufficient to protect the patent system.

Congress accordingly created IPR to provide a more efficient and streamlined administrative alternative to litigation for determining patentability before specialized patent judges. IPR has served to enhance the U.S. patent system and strengthen U.S. technology and innovation by weeding out thousands of invalid patent claims.

To ensure that IPR fulfills its purpose as a superior alternative to litigation over patent validity, the AIA specifically contemplates that IPR will be available to determine the patentability of patent claims that are also the subject of pending patent infringement litigation.

In the agency action challenged in this suit (referred to here as the "NHK-Fintiv rule"), however, the Director determined that the PTO could deny a petition for IPR based on a balancing of discretionary factors relating to the pendency of parallel patent infringement litigation—factors that appear nowhere in the AIA. The agency’s application of that rule has dramatically reduced the availability of IPR, regardless of the weakness of the patent claims being challenged, thereby undermining IPR’s central role in protecting a strong patent system.

The NHK-Fintiv rule violates the AIA, which allows IPR to proceed in tandem with infringement litigation involving the same patent claims so long as the IPR petition is filed within one year after the petitioner was served with the complaint in the infringement suit. Congress dictated in the AIA exactly when litigation should take precedence over IPR and vice versa, and the NHK-Fintiv rule contravenes Congress’s judgment. Indeed, the NHK-Fintiv rule defeats the purpose of IPR, which is to provide a streamlined and specialized mechanism for clearing away invalid patents that never should have issued, and to do so without the substantial costs, burdens, and delays of litigation.

The NHK-Fintiv rule is also arbitrary and capricious because its vague factors lead to speculative, unpredictable, and unfair outcomes and will not advance the agency’s stated goal of promoting administrative efficiency.

Finally, even if it were not contrary to law, the NHK-Fintiv rule is procedurally invalid because it was not adopted through notice-and-comment rulemaking. Both the APA and the AIA obligated the Director to follow that procedure, yet the Director instead propounded the NHK-Fintiv rule through an internal process within the PTO for establishing binding rules by designating select decisions of the Patent Trial and Appeal Board as “precedential”—a process that provides for no opportunity for or consideration of public input.

The Court should therefore declare the NHK-Fintiv rule unlawful and set it aside under the APA. The Court should further permanently enjoin the Director from applying the rule or the non-statutory factors it incorporates to deny institution of IPR."

Under the Plaintiff section of the lawsuit Apple is described this way:

"Apple is an American success story and developer of iconic consumer devices and software that have transformed the American economy. With more than 90,000 employees in the United States, Apple is one of the country’s largest employers in the high-technology business sector. Overall, Apple supports 2.4 million jobs in all 50 states. Last year, Apple spent over $60 billion with more than 9,000 domestic suppliers across the country, including at manufacturing locations in 36 states. Apple invests billions of dollars annually in U.S. research and development, and it owns more than 22,000 U.S. patents that protect that investment."