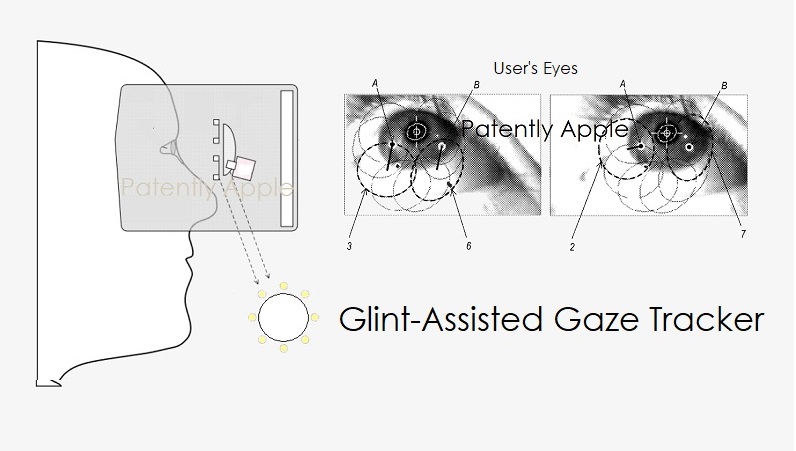 Today the US Patent & Trademark Office published Apple's fourth patent application relating to their eye tracking system for 2020 alone. The patent relates to yet another dimension of their advanced eye tracking/eye gazing technology for their future Head Mounted Display (HMD) device. The other three patents covering this technology could be reviewed here: 01, 02 and 03. Today's patent introduces us to how an eye tracking system is able to obtain biometrics of a user using event camera data and then auto-adjust the brightness of the imagery generated onto the HMD display and more.

Apple's eye tracking system using intensity-modulated light sources uses machine learning. This system can perform some very unique functions. For instance, in one case, the one or more light sources modulate the intensity of emitted light according to user biometrics.

For instance, if the user is blinking more than normal, has an elevated heart rate, or is registered as a child, the one or more light sources decreases the intensity of the emitted light (or the total intensity of all light emitted by the plurality of light sources) to reduce stress upon the eye.

As another example, the one or more light sources modulate the intensity of emitted light based on an eye color of the user, as spectral reflectivity may differ for blue eyes as compared to brown eyes.

In various implementations, eye tracking, or particularly a determined gaze direction, is used to enable user interaction such as allowing the user to gaze at a pop-up menu on the HMD display and then choose one specific option on that menu by simply gauging the user's gaze position in order to perform an action.

Apple's patent FIG. 1 below is a block diagram of an example operating environment #100 wherein the controller (#110) is configured to manage and coordinate an augmented reality/virtual reality (AR/VR) experience for the user. 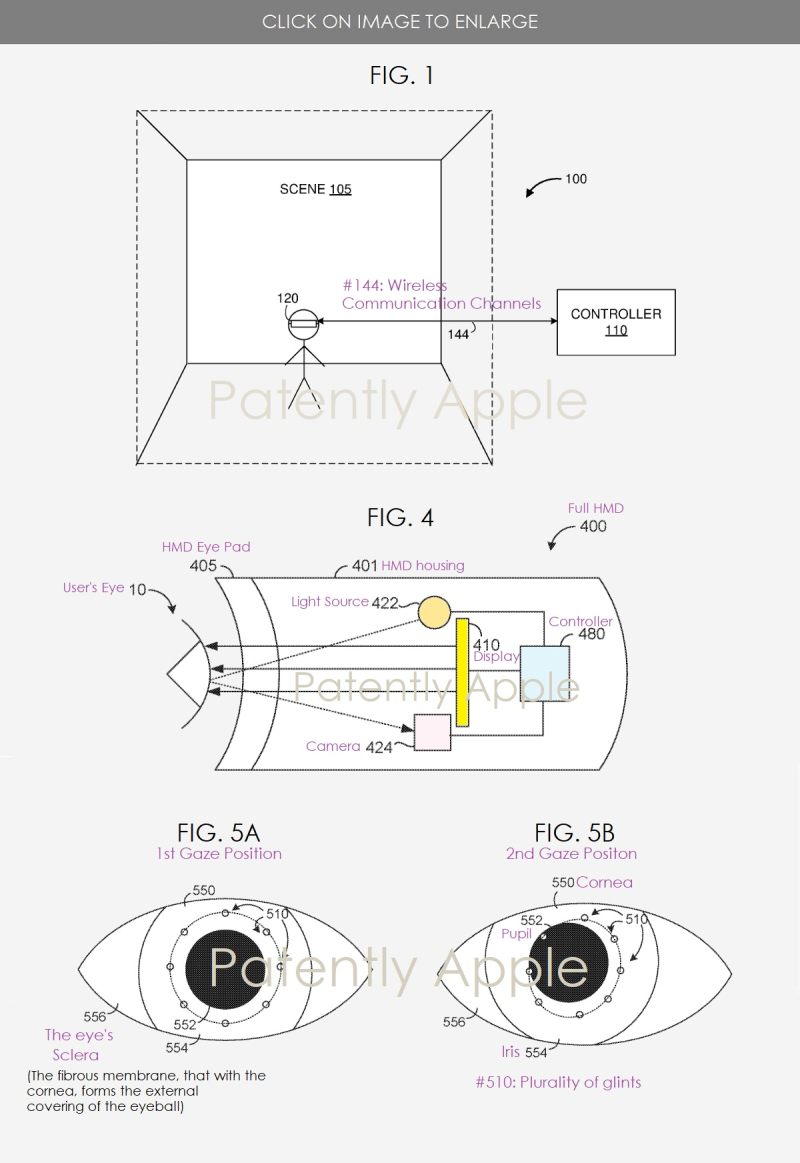 Apple's patent FIG. 4 illustrates a block diagram of a head-mounted device (#400). The housing (#401) also houses an eye tracking system including one or more light sources #422, a camera 424, and a controller 480. The one or more light sources 422 emit light onto the eye of the user 10 that reflects as a light pattern (e.g., a circle of glints) that can be detected by the camera 424. Based on the light pattern, the controller 480 can determine an eye tracking characteristic of the user 10. For example, the controller 480 can determine a gaze direction and/or a blinking state (eyes open or eyes closed) of the user 10. As another example, the controller 480 can determine a pupil center, a pupil size, or a point of regard. Thus, in various implementations, the light is emitted by the one or more light sources 422, reflects off the eye of the user 10, and is detected by the camera 424. In various implementations, the light from the eye of the user 10 is reflected off a hot mirror or passed through an eyepiece before reaching the camera 424.

In various implementations, the one or more light sources emit light towards the eye of the user which reflects in the form of a plurality of glints which form a pattern. The reflected pattern (and, potentially, other features, such as the pupil size, pupil shape, and pupil center), an eye tracking characteristic of the user can be determined.

The eye includes a pupil surrounded by an iris, both covered by a cornea. The eye also includes a sclera (also known as the white of the eye).

The geometric analyzer #970 receives data regarding detected glints from the glint detector (#940) and data regarding the pupil of the eye of the user from the pupil detector (#960). Based on this received information, the geometric analyzer determines an eye tracking characteristic of a user, such as a gaze direction and/or a blinking state of the user.

Apple's patent application 20200278539 that was published today by the U.S. Patent Office is shown being filed back in Q1 2020, though the patent shows that some of the work dates back to a 2017 filing being incorporated into this latest filing.

Daniel Kurz: Senior Engineering Manager (Computer Vision, Machine Learning) who came to Apple via the acquisition of Metaio. Some of the earlier work on this patent likely came from the Metaio acquisition and revised with Apple team members.