Home Archives Contact Us Subscribe Twitter Facebook MeWe Patently Mobile
In the age of COVID-19, New York's Mass Transit Agency asks Apple to accelerate new technologies to Unlock iPhones
An Apple Customer in Montreal thinks that Apple should reveal if Staff were Sick if a Store is Shutdown due to COVID-19 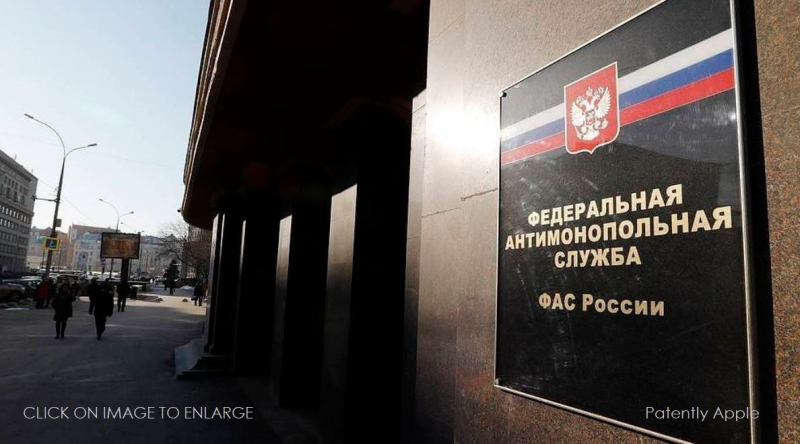 A year ago Patently Apple posted a report titled "Russia's Antitrust Service has Reportedly started a formal Investigation into Apple for locking out Kaspersky Lab App." Today, the Russian government's Federal Antimonopoly Service (FAS) found Apple guilty of abusing its dominant position in the application market. This was reported on by Russia owned news agency TASS.

The service reported that "The FAS Commission found that Apple abused its dominant position in relation to developers of parental control mobile applications and limited competition in the distribution market for applications for mobile devices running on the iOS operating system," the service said.

The violation also resulted in Apple having established the right to reject and exclude any third-party application from the App Store, even if it meets all the requirements. The company will be ordered to eliminate the violations.

In March 2019, Russian antivirus software provider, Kaspersky Lab, said it had lodged a complaint with the Federal Antimonopoly Service (FAS) regarding Apple’s policy in the parental control applications market for mobile devices with iOS.

Kaspersky Lab said that Apple had started to use its dominant position to create competitive advantage for its own Screen Time application. This is reflected in the demand that all iOS developers have to remove configuration profiles from their applications.

According to Kaspersky Lab, Apple demanded that in order to have its Kaspersky Safe Kids application certified for release via the App Store, Kaspersky Lab should disable its two main functions - the Application Blocking and Safari Browser Blocking. Prior to that, the application has been available on the App Store for three years without any objections by Apple Inc.

In late April, it was reported that Apple in its official statement explained the removal of parental control applications of a number of third-party developers from the App Store by the fact that they did not meet the requirements of the corporation’s policy regarding user safety and privacy. The corporation emphasized that removing third-party parental control apps from the App Store is not a matter of competition, but a matter of security.

The investigation established that Apple occupied a dominant position with a 100% share of the market for mobile applications on the iOS operating system, since it is possible to install such an application legally only from the App Store.

A spokesperson with the Kaspersky Lab told TASS that they are satisfied with the outcome of the case. "Primarily because the abuse by large corporations and their attempts to transfer their market power, which has negative effects on competition in adjacent markets, must be prevented.

Healthy competition fosters progress and as a result users benefit from that. We hope that Apple will correct the policy and attitude towards competitors in the markets adjacent to the iOS platform and, when releasing its applications, Apple will not place them in a more privileged position and will not create all sorts of obstacles and barriers to other companies," the official at the Kaspersky Lab stressed.

The Russian verdict will likely be used against Apple by the EU commission that recently opened their own investigation into Apple's App Store practices, even if they deny it.

In the end, did anyone ever think that Russia's antitrust body would decide anything besides guilty against Apple?