Home Archives Contact Us Subscribe Twitter MeWe Patently Mobile
Apple Beat out Huawei in Q2-20 to become the Tablet Leader in China as Students Drove sales due to Stay-at-Home Education
In Q2-20 more than half of the Smartphones sold in Canada were iPhones, with the iPhone 11 coming out on Top 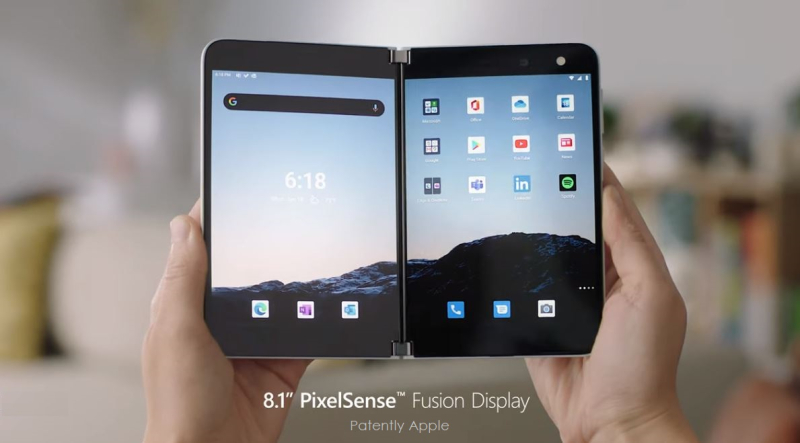 On Sunday the news was out of the bag. Microsoft was going to release their dual display smartphone as early as August 24th. Earlier today Patently Apple posted a report titled "Microsoft's Dual Display Smartphone branded the 'Surface Duo' is set to launch on September 10." Later in the morning Microsoft's Panos Panay, "Chief Product Officer, Windows + Devices" made it official by announcing that the Surface Duo is now ready for pre-order, today!

A Message from Panos Panay

"When we created Surface seven years ago, we wanted to challenge convention by redefining expectations for what a productivity device should be, and what it should do. Put simply, we wanted to help people get things done. We didn’t set out to combine two existing devices – the tablet and the laptop. We had a vision for how we could take the best elements of each to create something entirely new. To find that perfect intersection of hardware and software that unlocks a more intuitive way to work and create. We faced some skepticism, but ultimately a new category was born that drove growth for the PC industry. More than that, behaviors started to change. People’s eyes were opened to the idea that touch shouldn’t be just for tablets and phones. And the ability to get things done shouldn’t be limited to just when you were sitting in front of a traditional PC.

Today, as we look ahead to the next wave of mobile productivity and creativity, we see that same opportunity to create something new with Surface Duo – not to reinvent the phone, but to inspire people to rethink how they want to use the device in their pocket. Available for preorder in the U.S. starting today, Surface Duo brings together the power of Microsoft 365 experiences and the full ecosystem of Android mobile apps into one device, with two screens that you can take anywhere.

Starting at $1399, Surface Duo opens into the thinnest mobile device on the market, connecting two PixelSense Fusion Displays to create one expansive 8.1-inch screen. The Dynamic 360-degree hinge allows you to use each screen individually or together, across a variety of modes. Join a Microsoft Teams meeting and see participants on one screen while you present your PowerPoint slides on another. Open the Amazon Kindle app and read a book like a book. Position Surface Duo’s screen like a tent and watch a video hands-free. Use Surface Duo in Compose mode to quickly respond to an email, or tilt it into portrait for a more immersive way to scroll through web pages or photos. Pair your Surface Duo with a supported Bluetooth controller to play games on Xbox Game Pass Ultimate or with Surface Earbuds, coming Sept. 10 in Graphite Grey, to listen to your favorite playlist or podcast. Or easily take notes with the Surface Slim Pen, sold separately."

The New Surface Duo. Do One Better.

A More Productive Way to Get Things Done

"We designed Surface Duo for people who want to get more done with the device in their pocket. Our internal research shows that three out of four people report struggling to complete complex tasks while away from their computer. That’s because smartphones with a single screen aren’t designed for you to easily do multiple things at once. Think about it. You continually have to switch between apps to get even the most essential things done – breaking focus, breaking flow. Just like using two monitors at your desk, having two distinct screens lets you open up two apps side by side, cross-reference information, and drag and drop to effortlessly move images, text and files between screens so you can get things done quicker. We know dual-screen devices not only help people complete complex tasks faster but also require less cognitive effort, making them universally preferred for productivity tasks." 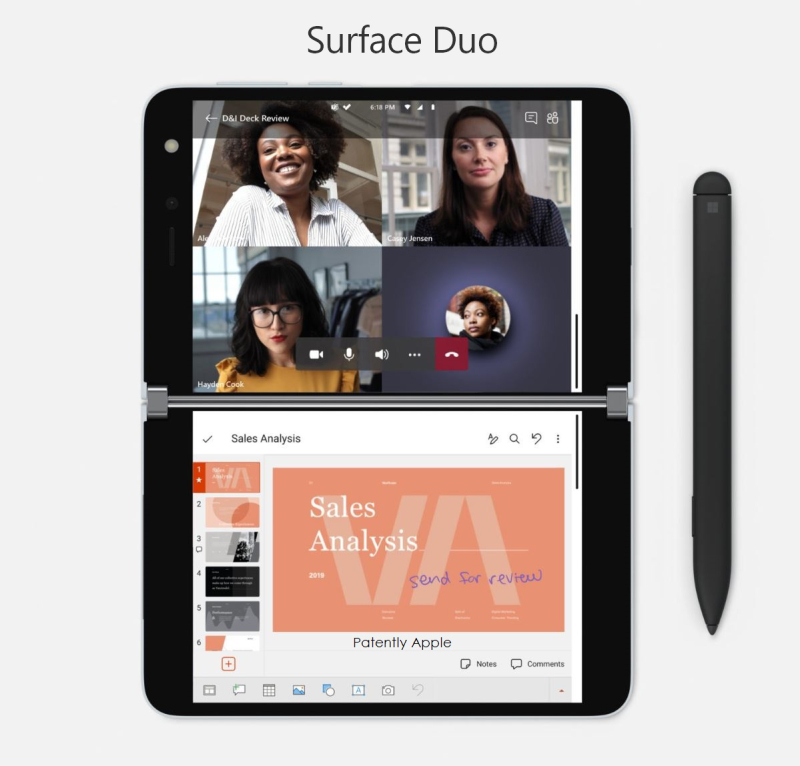 A New Way to use your Favorite Apps

"The ability to use two screens together on a mobile product has a real impact on how you create, how you share, and how you feel when using the product. Just like cooking, when you combine two flavors that perfectly complement each other, some apps light up in new ways when you use them side by side. Watch a video without missing out on the text thread with your friends. Read and take notes. Look at your calendar while you respond to an email to schedule a meeting. Compare two things side by side when shopping online. You can create your own custom app groups and open them with one tap right from your home screen. Or easily move apps between screens. Pick any of your favorite Microsoft 365 apps or other apps from the Google Play store and pair them together."

The best Combination of Microsoft 365 and Android Apps

lastly Panos Panay stated that "We built Surface Duo to give people Microsoft 365 mobile experiences, every Android app in the Google Play store, and a seamless cross-device experience with your Windows 10 PC. We have worked to optimize apps including Office, Outlook, Teams, Edge, OneNote, OneDrive, Microsoft To Do and more for two screens, while continuing to extend Windows to add more value to people also using Android phones. With the Your Phone app on Surface Duo, you can get notifications and texts, make and receive calls, share photos and even mirror the dual-screen experience of your Duo right on your Windows PC. Easily copy and paste content between your Surface Duo and PC – no more sending yourself emails or texts to transfer information.

Surface has always played a role to push Windows forward by pioneering new experiences across hardware and software. With Surface Duo, we want to help shape the dual-screen category by providing consistency in the way customers experience it and developers design apps. So as we unlock new experiences with Duo, we are working closely with Google to make additions to the Android operating system, paving the way for more apps to take advantage of the full productivity power of two screens.

As a company, we are focused on delivering purposeful innovation – pushing the boundaries of existing categories to not just move technology forward, but to move people forward. So, with Surface Duo, we didn’t focus our energy on the places the industry is already advancing – processors and networks will get faster, and cameras will get better with or without us. Instead, we went after something. As with any new category or form factor, people will find it fits into their lives and workflows in different ways. When we launched Surface Pro, not everyone believed a tablet could truly replace their laptop, until it did. It takes patience and conviction to do something different. We’ve been doing that for over seven years now at Surface and many of you have been on the journey with us. For the Surface fans, Microsoft 365 fans and Android fans who are ready to take that next step with us, we can’t wait for you to experience Surface Duo.

Surface Duo is available for preorder in the U.S. today through MicrosoftStore.com, AT&T and Best Buy. It will be available in store and online beginning Sept. 10. Surface Duo will work on AT&T, T-Mobile and Verizon Wireless networks. To learn more about Surface Duo for Business, commercial customers can connect with their local commercial reseller." 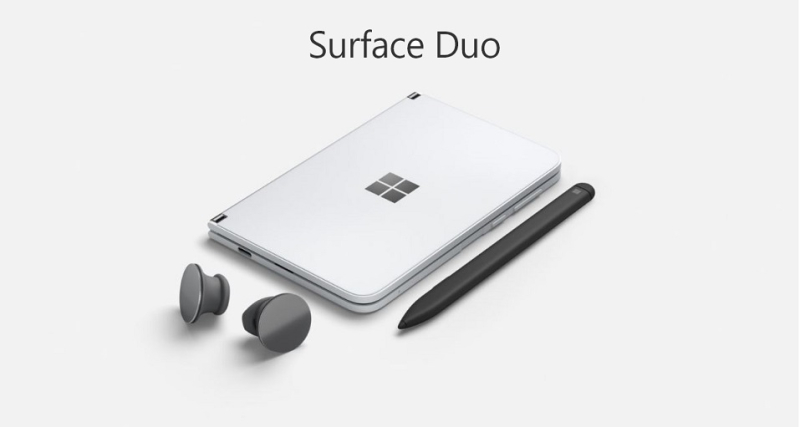