ByteDance Tried to Explain to Angry Staff and Fans that to avoid an outright ban of TikTok in the U.S. they chose to make a Deal 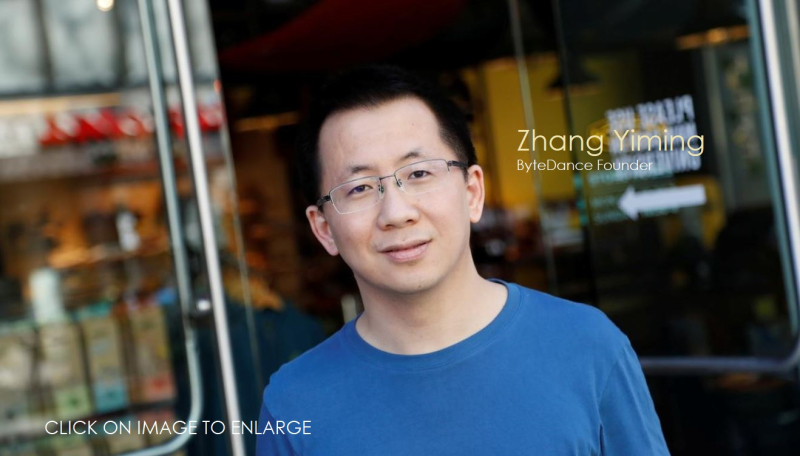 On Friday Patently Apple posted a report titled "U.S. President Trump may announce that TikTok has to be sold to a U.S. Company and the odds are that it could be …" The report noted: "I think that Wall Street would love to see Apple acquire TikTok to shake up social media's top dogs. Yet with Apple under the microscope by both the EU and U.S. antitrust committees for being monopolistic, the odds are extremely slim Apple will be joining in the bidding for the company. The timing for such a deal is all wrong.

This morning the Apple blogosphere raced to jump on the rumor started by Axios, one we ignored because of the position we laid on Friday.

Then came Reuters report stating that "Apple Inc has no interest in acquiring TikTok, the company said on Tuesday, denying a report by news website Axios from earlier in the day.

Since that time we've learned that the Founder of ByteDance Zhang Yiming had to respond to an angry backlash against the company in China for even entertaining the sale of TiKTok to Microsoft.

The founder understood the anger Chinese fans were having as they have high expectations for their young Chinese company and they're looking for a reason to lash out at the U.S. The angry fans are calling for a boycott of the popular TikTok app in China because the CEO was giving in much too quickly to the U.S.

However, as we reported on Saturday, "ByteDance did not seek approval for the acquisition from the Committee on Foreign Investment in the United States (CFIUS), which reviews deals for potential national security risks. Reuters reported last year that CFIUS had opened an investigation into TikTok."

I had commented in the report that this wasn't "something that a foreign company accidentally forgets, which made the case for the U.S. President to act upon. Zhang acknowledged this as the heart of the problem."

Zhang tried to explain to his fans that "some people had misunderstood the U.S. situation. He said Washington’s goal was not to force a sale of TikTok’s U.S. operations through the Committee of Foreign Investment in the U.S. (CFIUS) but to ban the app, and there was a legal process ByteDance had no choice but to follow."

In order to not have TikTok right-out banned in the U.S. Zhang told his staff on Monday in another internal letter that the company had started talks with a tech company so it could continue to offer the TikTok app in the United States. For more on this, read the full Reuters report.

Yesterday we posted a report titled "Microsoft Confirms that a Deal for TikTok should be Completed by September 15."