Home Archives Contact Us Subscribe Twitter MeWe Facebook Patently Mobile
In Q2-20, Apple Dominated the Premium Smartphone Segment in India as they plan to be a bigger Player in that market in 2021
Apple Files a Six-Count Countersuit against Koss Corporation for Breach of Contract and more

At the Moment, the Executive Order Banning TikTok and WeChat in the U.S. App Store shouldn't be an issue for Apple 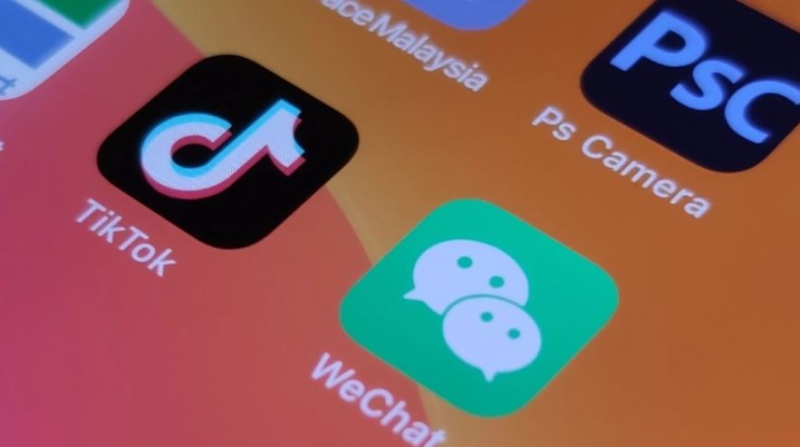 Last Friday Patently Apple first reported that U.S. President Trump was preparing to ban the TikTok app in the U.S. should a deal with Microsoft not be reached by September 15. On Thursday the hammer was dropped with executive orders being signed that will ban China's TikTok from ByteDance and WeChat from Tencent in the U.S. that reportedly taking effect on September 20.

While the scope of the ban remains unclear, the executive orders said that after 45 days, Secretary of Commerce Wilbur Ross “shall identify the transactions” that will be subjected to the prohibition.

China’s foreign ministry on Friday said at a media briefing that Beijing will defend the legitimate rights and interests of Chinese businesses.

In another Patently Apple report we stated that "ByteDance did not seek approval for the acquisition from the Committee on Foreign Investment in the United States (CFIUS), which reviews deals for potential national security risks. Reuters reported last year that CFIUS had opened an investigation into TikTok."

I had commented in the report that this wasn't "something that a foreign company accidentally forgets, which made the case for the U.S. President to act upon. Zhang acknowledged this as the heart of the problem."

In that context, the ByteDance CEO now playing it up for the press by stating that he was shocked at the executive order is as hypocritical as could be. With that statement, TikTok's CEO has just lost all credibility on this matter.

What are the Implications for Apple?

The question for Apple shareholders is what are the implications of the ban for Apple. In the U.S. the ban will also extend to Google Play, so it's not an Apple only issue. It's not like a new Android fan will be able to access TikTok from Google Play.

Yet the matter could get a little complicated for Apple if the ban extends to their App Store in China. Though that hasn't been clarified yet by the executive order as we know it today. Until this point is clarified, playing the "What if" game is futile, even though there are reports like this one out today from the Verge playing up the fear factor. Their report states that "If Apple can’t offer WeChat on the iPhone due to Trump’s ban, then its Chinese business will almost certainly evaporate overnight."

There will be plenty of time to cover the issues rationally when all of the important facts are in. Scenarios of Apple's demise in China at this stage would seem to be politically motivated.

For now, Apple's compliance with the ban is fully expected in context to it being limited to the U.S. In a CNBC report published today it states that Apple and Google have complied with bans on apps in both India and China in record time. For instance, we reported on August 1, that Apple removed 26,000 games from their App Store in China, complying with an order from the Chinese government.

Other than games, CNBC further reports that "Between July 2018 and June 2019, Apple removed 851 apps from its platforms in certain regions after legal requests from countries including China, Russia, Norway, and Saudi Arabia."

Further, "When India banned TikTok and WeChat among other Chinese apps in June, the apps were removed from both the App Store and Play Store in that country within hours."

Additionally, Apple CEO Tim Cook addressed app removals in China in 2017 by saying: “We would rather not remove apps, but like we do in other countries we follow the law wherever we do business."

That statement made by Cook should now extend to the U.S. ban being imposed unless Cook decides to play politics. Of course I can't see that happening knowing that the antitrust committee is now assessing whether to break up the App Store, have it subject to government oversight, or leave it alone.

Microsoft and Facebook already smell blood in the water and are making a lot of noise over online gaming restrictions on the App Store. Apple losing the App Store would make a lot of competitors very happy. So the idea that Apple wouldn't comply with the executive order to ban TikTok and WeChat on the U.S. App Store is rather ludicrous.

Lastly, Yahoo Finance reported on Friday that "On Thursday, the US senate voted unanimously to approve a bill prohibiting federal workers from using TikTok on government-issued devices, amid fears of data collection."

A unanimous vote tells us that both sides of the aisle have agreed that TikTok is considered a threat to national security and so the extension of it being banned to the general public now has precedent.