As Apple prepares to introduce mini-LED displays on the iPad Pro and beyond, it's just a stepping stone to higher-end micro-LED Displays 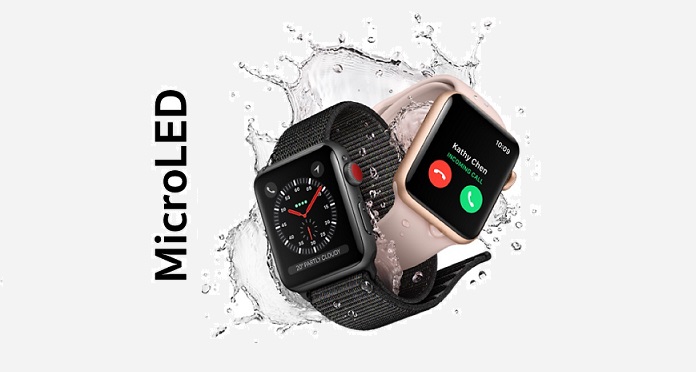 A rumor surfaced last September from Ming-Chi Kuo claiming that Apple would be introducing mini-LED displays for their high-end iPad Pro and MacBooks by 2021. Since then there have be a string of rumors about Apple products using mini-LED along with various release dates being forecasted (01, 02 and 03). The latest rumor surfaced in July claiming that LG will be Apple's mini-LED supplier for the iPad Pro launching later this year.

Starting next year both Samsung and LG will be introducing mini-LED televisions. A Korean business site claims that a current LCD TV has about 50 LEDs in its backlight, but a mini-LED TV has 10,000 to 20,000 ultra-small 100- to 200-micrometer LED chips in its backlight. Mini-LED TVs are thinner than LCD TVs but offer an 8K resolution, enhance color reproducibility and consume less power. They are premium TVs. Suffice to say that 2021 will be the year of mini-LED displays. Whether Apple will be getting the leap with the iPad Pro this year is still unconfirmed.

Of course Mini-LED is a stepping stone to eventually advancing to micro-LED. A European report published last year provided a chart as presented below showing projections for the technology on the market from 2019 to 2025. One thing stood out in that report is that smartwatches would be the number one product taking advantage of this high-end display technology. 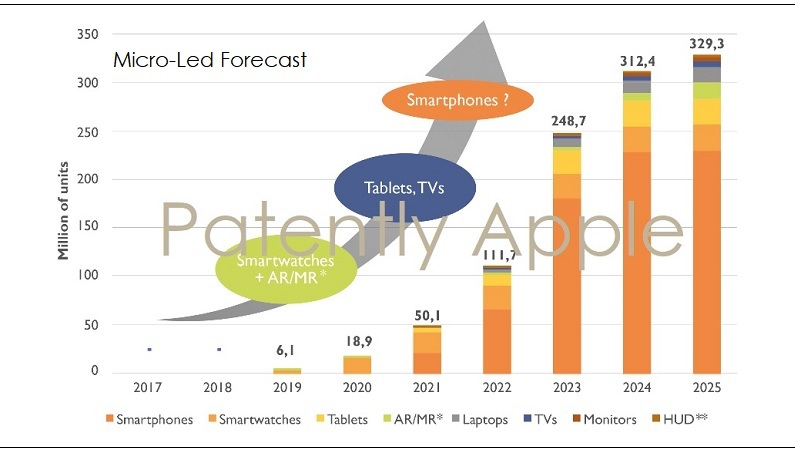 Last August Patently Apple posted a micro-LED patent from Apple that was aimed at future iDevices and Macs.

For newbies to Apple products, it should be noted that Apple acquired LuxVue, a micro-LED specialist back in 2014. Since that time there's been a number of patents from LuxVue and Apple that we've covered such as this one and our display archives provides many more. Apple has stayed under the radar as to what projects that their LuxVue team are working on and prioritizing, but to be sure, Apple will be one of the top tech companies that will be championing this technology when the manufacturing processes have been finalized.

Supporting previous studies and reports, a new Digitimes report today states that "Smartwatches will be the first major applications for micro LED with volume adoption likely to take place 3-4 years from now, according to Epistar chairman Lee Biing-jye.

There are smartwatch vendors showing interest in adopting micro LED displays, Lee said, adding a smartwatch screen resolution of about 300 x 300 is equivalent to 300,000 micro LED chips, which can be mass transferred in one go.

Epistar has overcome many micro LED technological difficulties, such as mass transfer, and expects to achieve reliable production capability in 2-3 years, and introduce end-market applications in 3-4 years, Lee noted.

Epistar is currently an Apple supplier. Back in July 2018 it was reported that Apple had secretly visited AUO and Epistar for a potential partnership on micro-LED development.

Earlier in 2018 it had been revealed that Apple had a secret micro-LED testing-plant in California. The problem that Apple and the industry were having was overcoming the issue of improving yield to make the use of micro-LED displays viable.

In order to bring micro-LED to market for Apple Watch requires mass production capability. This is why Apple was meeting with both Epistar and AUO who are claiming to have a plan to overcome yield issues.

So it's good news to hear today that Apple supplier Epistar is getting the word out that micro-LED displays will be ready for mass production over the next 3 to 4 years. It will take that long for Apple to first adopt mini-LED into their line-up of iDevice and Mac products before evolving to the higher-end micro-LED displays.