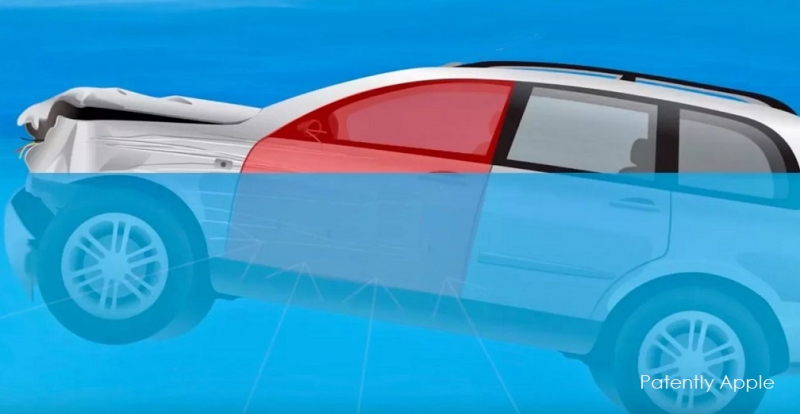 Apple introduced Car Keys at this year's WWDC20 to the general public via their televised keynote and to developers in a session delivered by Apple Engineer Matthias Lerch. Apple also has a Car Keys 'how to" webpage here. Car Keys generated a lot of buzz in the Apple community. Yet this is child's play when it comes to the depth that Apple engineers are working on for future vehicles.

Patently Apple has dedicated a "Project Titan" archive that logs Apple's future vehicle inventions that you could review here. Today is one of those days when reading a new Project Titan patent application, I was left in awe. In most ways it's stunning to read about where vehicle engineering is going. Yet in some ways it's easy to get creeped out at how far these systems are going in profiling users.

What does that entail? To begin with it includes the breathing pattern and heart beats through micro-Doppler analysis of data generated by the device. In some embodiments, the various life signs signatures that can be detected based on processing sensor data generated by a radar device can be utilized to associate a detected occupant with a particular occupant type, including that of a human child, human elderly, dog, cat, pet, etc.

Okay, cars are going to know you even by how you breathe. It's a signature you hope is restricted to Apple's secure enclave. It's bad enough that they're already collecting Fingerprint, Face and future Iris biometrics and next they envision a breathing signature? Call me old fashion, but that's bordering on creepy.

On the other hand, the potential for saving lives through future smart vehicle systems borders on genius. The systems described are something that you'd expect to only see in a Sci-Fi movie. But that's exactly what one of Apple's latest patent titled "Dynamic Element Protection" projects.

One angle of the patent describes a system that could protect a driver or occupant by not allowing them to open a door if a sensor detects that a projectile or entity is charging or advancing towards the vehicle in a projected manner that could cause injury or kill the vehicle occupant that's exiting.

Imagine getting a flat tire, pulling over onto the road's shoulder and getting out of the car to check it out the extent of the damage. If there happens to be an oncoming vehicle on target to hit your door as you open it, the vehicle door won't open until the threat has passed.

A lot of Apple's patent is a difficult to read. In one case, one of the engineers kept referring to the vehicle door as a portal. I'm sorry, but that took a moment to wrap my head around. Though once the clouds open in certain scenarios, you have to be impressed at the depth of thinking that's gone into Apple's future protection modules for vehicles.

Below is one of the best scenarios relating to an emergency submergence response system that's quite impressive. An ABC video report claims that on average 94 people die every year from people being trapped in a car involving water or flash floods. Apple's proposed system could one day save many lives. 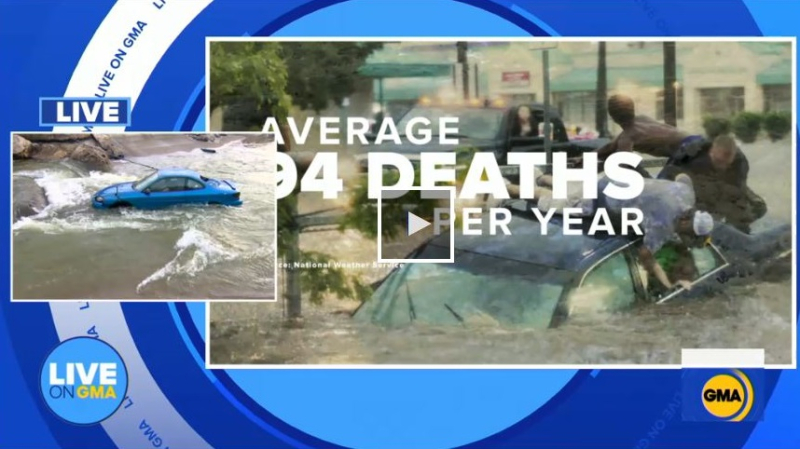 Apple's patent FIG. 14 below illustrates a system for responding to a detected state of at least being partially submerged in a vehicle, such as being caught in flash flood or crashing off a bridge, as examples. The response can be implemented by any of the embodiments of protection modules in a vehicle implemented by one or computer systems. 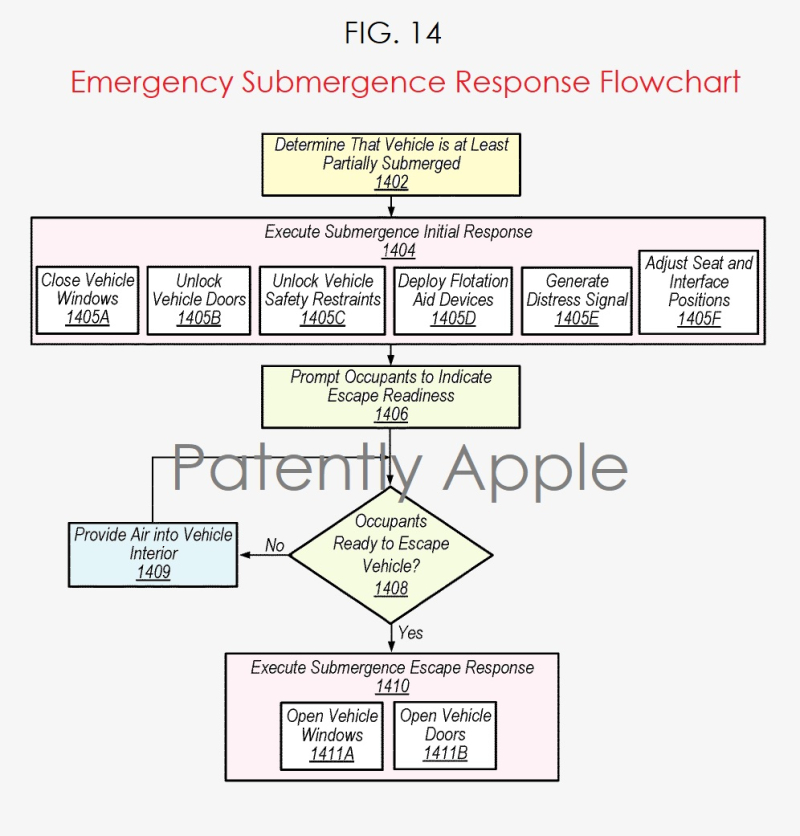 Going by the flow chart laid out above, beginning at flowchart point #1402, a determination is made, based on processing sensor data generated by one or more sensor devices, that the vehicle is at least partially submerged in a fluid, where a fluid can include water.

For example, based on a determination that a fluid pressure on a roof surface, including an external surface of a moon roof, meets a threshold pressure, the vehicle can be determined to be fully submerged. 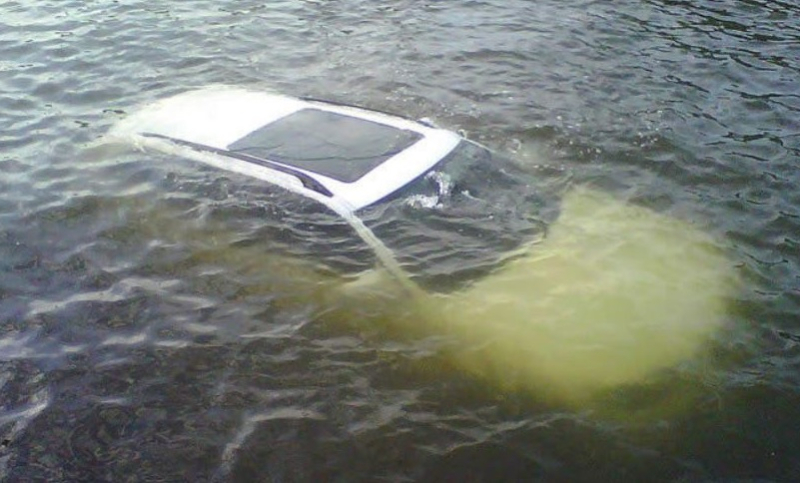 In some embodiments, sensor data generated by one or more liquid sensors included in the vehicle, including one or more rain sensor devices installed in the vehicle and configured to detect precipitation, can provide confirmation of fluid presence on the exterior of the vehicle to provide a secondary indication of vehicle submergence.

At point flowchart point #1404, in response to the determination that the vehicle is at least partially submerged, a submergence initial response is executed.

Closing vehicle windows (at flowchart point #1405A of the flowchart) can mitigate the flow of fluid into the vehicle, thereby giving occupants more time to prepare to escape the vehicle.

Unlocking the safety restraints (Flowchart point #1405C), which can include safety belts, can enable the occupants to be configured to escape the vehicle without hindrance. In some embodiments, a mechanism, included in the vehicle, that is configured to unlock one or more vehicle safety restraints may be susceptible to failure as a result of one or more of electrical or mechanical failure.

In some embodiments, the cutting device included in a safety restraint device is activated, at 1405C, independently of one or more of an electrical failure, mechanical failure, etc. In some embodiments, the cutting device is separate from the safety restraint device and is deployed from a portion of the vehicle for manual access and utilization as part of unlocking.

Deployed flotation aids (Flowchart point #1405D) can include one or more inflatable devices configured to assist occupants in escaping the vehicle and reaching the fluid surface. A flotation aid can be deployed from various locations in the vehicle interior, and deployment can include at least partial inflation of the aid.

In some embodiments, the flotation aid devices are configured to be automatically mounted onto the occupants.

In some embodiments, the floatation aid device comprises one or more instances of equipment, including one or more transceiver devices configured to transmit a distress signal that can be utilized by others to locate a position associated with one or more of the vehicle occupants escaping the vehicle, etc.

The equipment included in the flotation aids can be configured to be activated as part of deploying the aids. The distress signal (at flowchart point #1405E) can include one or more signals communicated via one or more communication networks, an audio signal, a visual signal, some combination thereof, etc. In some embodiments, the distress signal includes information indicating a geographic location of the vehicle.

For example, the prompt can include an audiovisual prompt that requests that the occupants indicate readiness to escape the vehicle via pressing a button interface installed in the vehicle.

In some embodiments, the prompt can specify a period of time remaining until the vehicle automatically executes a submergence escape response at flowchart point #1410 without receiving a readiness indication from the occupants, where the occupants can accelerate the execution of the response via indicating readiness prior to the expiration of the time period.

At flowchart point #1408, a determination is made regarding whether the occupants have indicated a readiness to escape the vehicle. In some embodiments, the vehicle includes one or more devices configured to provide one or more breathable gasses, including oxygen, into the vehicle interior, and such devices can be controlled (at flowchart point #1409) to provide at least some air in response to a determination that the occupants have not provided the indication.

At flowchart point #1410, based at least in part upon one or more of a determination that the occupants are ready to escape the vehicle, an expiration of a period of time, a determination that an amount of breathable gas in the vehicle interior is less than a threshold value, some combination thereof, etc. a submergence escape response is executed that exposes the vehicle interior to the external environment, which can be comprised of the fluid, in a controlled manner that enables the occupants to escape the vehicle.

In some embodiments, the vehicle comprises. Opening a window can include at least partially opening one or more selected windows, including a moon roof, a window that is furthest from the one or more occupants in the vehicle interior, etc.

In some embodiments, the vehicle includes one or more windows comprised of tempered material, including tempered glass, which is configured to break into a plurality of relatively small particles upon structural failure, so that the exposed portal as a result of the window failure is unobstructed by a remainder portion of the window, including shards, which can mitigate escape through the portal and could injure occupants attempting to escape through the portal.

There's a lot more to Apple's patent application 20200255002 and you could check out here.  The patent was filed back in Q1 2018. Considering that this is a patent application, the timing of such a product to market is unknown at this time.