Apple has been granted at least patents in 2020 relating to smart fabrics that will one day begin rolling out in Apple products (01, 02, 03, 04). While Apple already uses smart fabric for the iPad Pro smart keyboard, patents reveal that smart fabrics will be used in future Apple Watch bands, over-ear headphones and more. Today, the U.S. Patent Office published another smart fabric centric patent titled "Items with Wire Actuators."

Apple envisions smart fabrics being integrated into a wide range of products from laptops to tablets, to over-ear headphones, to smartglasses, to vehicle seats, headbands, watch bands, bags, cases, the iPhone and more.

In this patent, Apple states that it may be desirable to provide an electronic device or other item with actuators. Actuators may be used to provide tactile output to a user of a device. For example, haptic feedback may be provided to a user in connection with a key press event or a tactile alert may be generated.

More importantly and in context to what the heart of this patent is about, Apple notes that in order to provide a user with tactile (haptic) output, conductive strands of material may be used in forming actuators.

Further, components may be mounted to a printed circuit or may be coupled to cables or other signal paths and used in keyboards, a stand-alone button, capacitive sensors that serve as touch sensors or capacitive buttons, force sensors such as force sensors based on strain gauges or other structures, light-based input devices such as light-based touch sensors or light-based proximity sensors. Actuators on a keyboard can provide tactile output to a user's finger.

In an Item that includes a series of actuators that extend along a given dimension in a fabric item each actuator may be momentarily actuated in sequence to create a wave-like haptic effect.

In another instance, a stand-alone button may be able to produce a pulsating haptic effect. 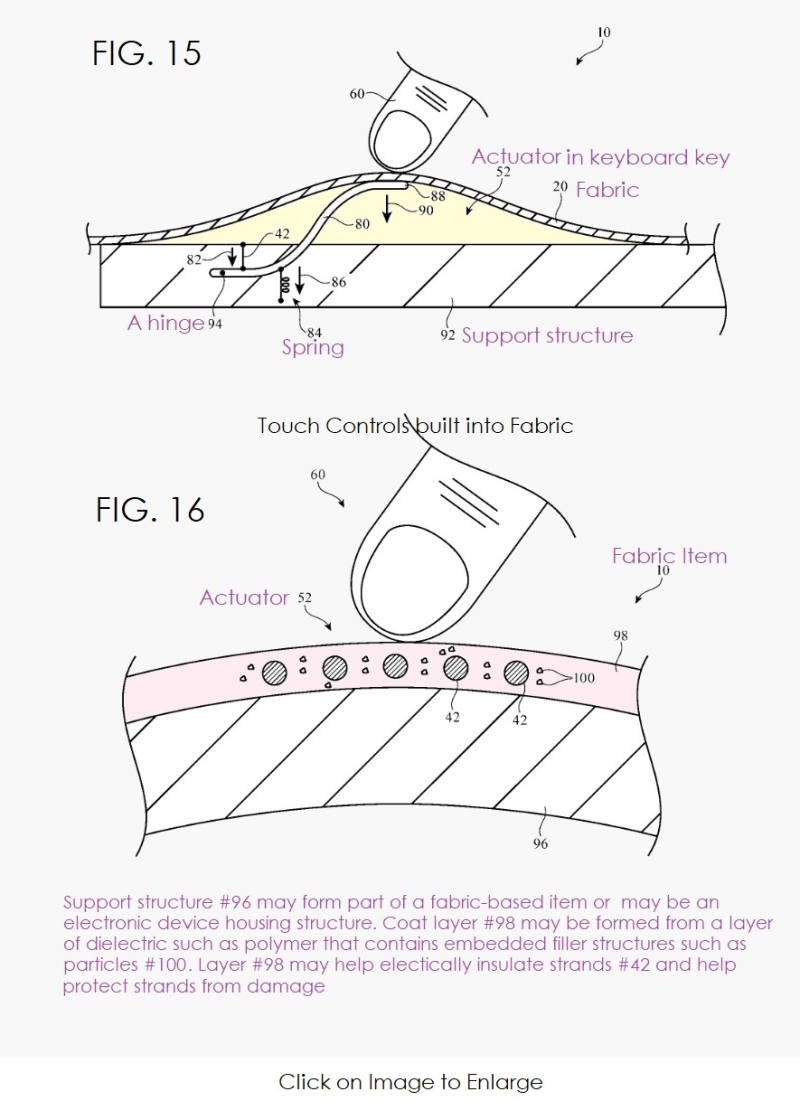 Beyond what most consumers know of fabric materials for regular clothing being made with natural materials such as cotton, smart fabrics could actually be made with polymers, metal, glass, graphite, ceramic, bamboo and more.

For example, plastic strands in a fabric layer may be coated with metal to make them conductive.

Reflective coatings such as metal coatings may be applied to make strands reflective.

And while we're ending this report touching on magnetic-field-based actuators, Apple's all-important patent claims has elevated this type of actuator as the prime actuator beginning with patent claim #1 which states:

"Apparatus, comprising: a magnetic-field-based actuator formed from a conductive strand that is coiled around a tubular structure with a non-circular cross-sectional shape; and a control circuit that applies current to the conductive strand to generate a magnetic field that causes the tubular structure to acquire a circular cross-sectional shape."

Apple's patent FIG. 19 below is a perspective view of an oval tube structure such as a length of piping on a fabric layer with an actuator formed from a coiled wire. 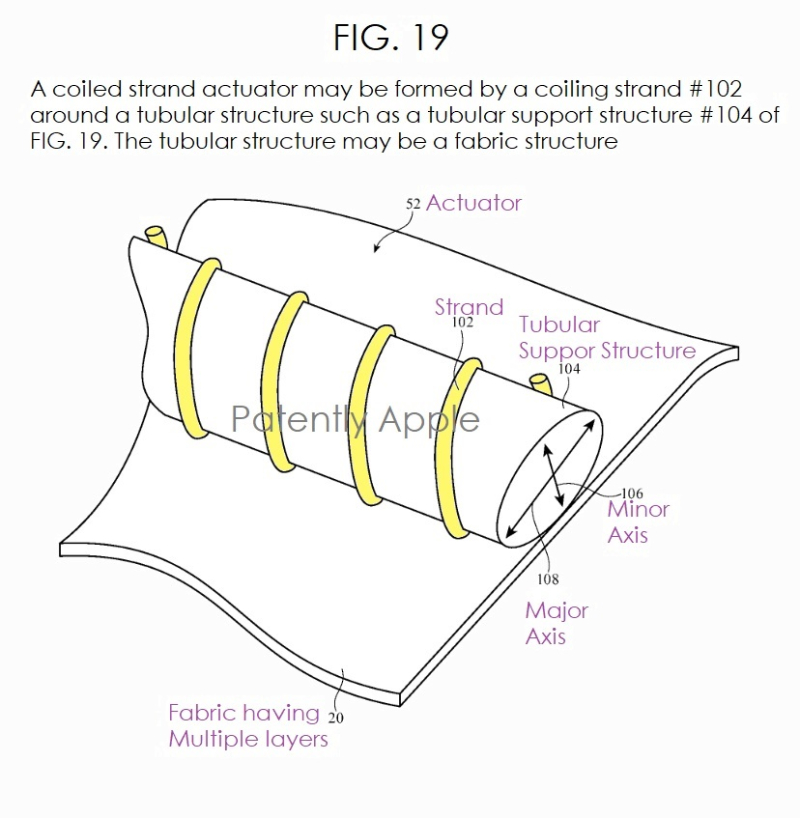 Apple's patent application 20200248346 that was published today by the U.S. Patent Office was filed back in April 2020 with some of the original work being incorporated into this patent dating back to 2016.