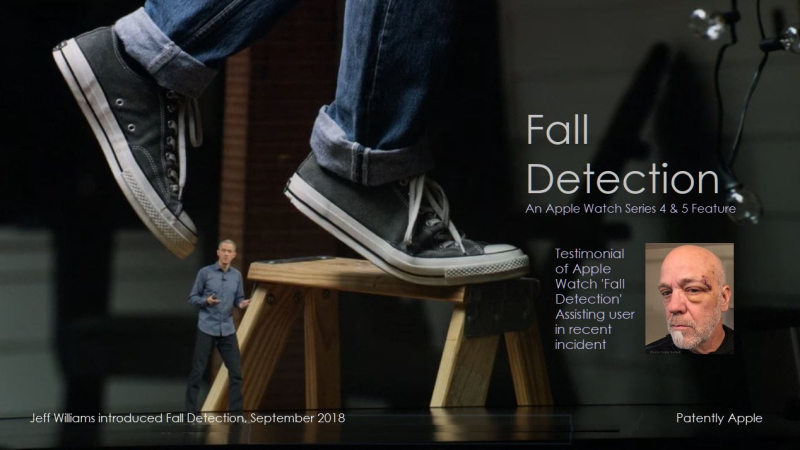 In April 2019 Patently Apple posted a report titled "Apple's Patent behind the Apple Watch Series 4 Feature known as 'Fall Detection' was Published Today." Apple's first granted patent was issued  in April 2020. In May, Apple filed a patent to advance Fall Detection by adding "Audio Looping" wherein ECG data of a user could be communicated to emergency services which wasn't a part of the original patent.

Today a new continuation patent was published by the U.S. Patent and Trademark Office that once again advances the Fall Detection Feature. Before pointing out what's new, I'm presenting a basic overview of this Apple Watch feature for those that are new to Apple or Apple Watch. The overview is based on how Apple engineers originally envisioned this feature to work. Of course if you're familiar with this feature you could skip this segment and jump to what's new.

For seniors and athletes of any age, this is a very important Apple Watch Feature.

Last September Patently Apple posted a report titled "Facebook Testimonial: An Apple Watch 'Fall Detection' Story." The story recounts how a son got a message from his dad's Apple Watch stating that it detected a hard fall with a Map of his dad's position where he fell. The watch also called 911 who rescued the dad who had fallen on a bike trail and was knocked unconscious. It's testimonies like this that drives sons and daughters to give Apple Watch to parents for Christmas (or other holiday).

For those not familiar with Apple's Fall Detection feature on Apple Watch,  this segment is a run through of the basics of this key feature. Starting with Patent FIG. 1 below, Apple presents us with an overview of the system graphically. Apple's patent FIG. 1 shows an example system #100 for determining whether a user has fallen and/or may be in need of assistance. The system includes an Apple Watch (a mobile device #102), a server computer system #104, communications devices #106, and a network #108. 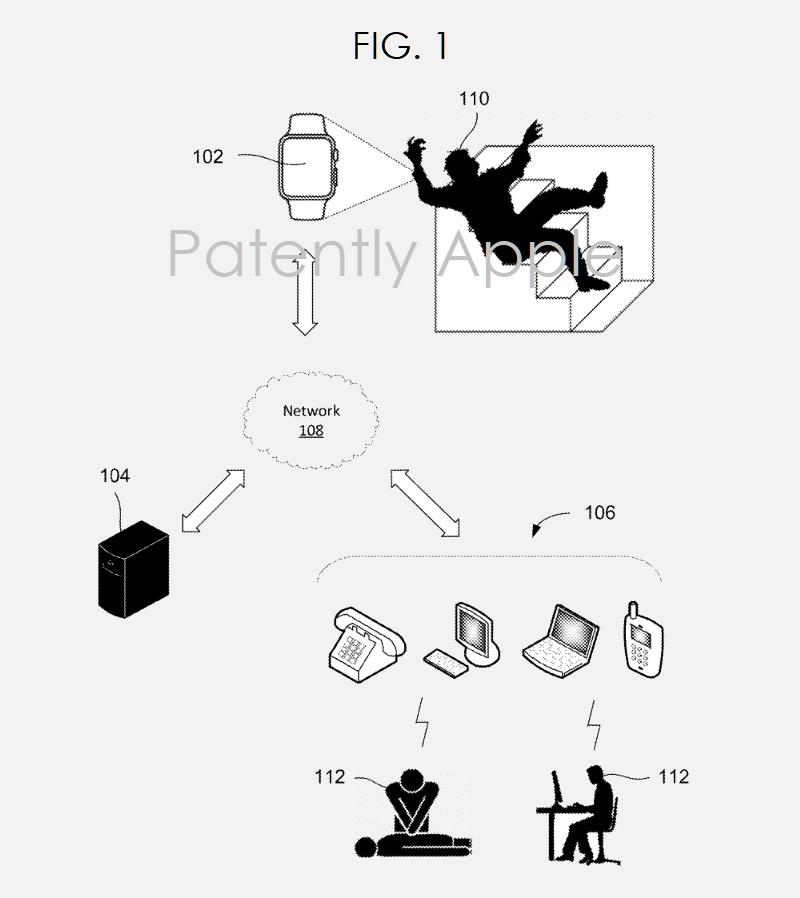 In an example usage of the system, a user #110 wears the Apple Watch (mobile device 102 on his body) and goes about their daily life. This can include, for example, walking, running, sitting, laying down, participating in a sport or athletic activity, or any other physical activity.

During this time, the Apple Watch collects sensor data regarding movement, an orientation, and/or other dynamic properties. Based on this information, the system determines whether the user has fallen, and if so, whether the user may be in need of assistance.

As an example, the user may stumble while walking and fall to the ground. Further, after falling, the user may be unable to stand again on their own and/or have suffered from an injury as a result of the fall. In this event, they may be in need of assistance, such as physical assistance in standing and/or recovering from the fall, medical attention to treat injuries sustained in the fall, or other help.

In response, the system can automatically notify others of the situation. For example, an Apple Watch can generate and transmit a notification to one or more of the communications devices #106 to notify one or more users #112 (e.g., caretakers, physicians, medical responders, emergency contact persons, etc.) of the situation, such that they can take action.

As another example, the Apple Watch can generate and transmit a notification to one or more bystanders in proximity to the user (e.g., by broadcasting a visual and/or auditory alert), such they can take action.

As another example, the Apple Watch can generate and transmit a notification to the server computer system #104 (e.g., to relay the notification to others and/or to store the information for future analysis). In this way assistance can be rendered to the user more quickly and effectively.

In some cases, the system can determine that the user has experienced an external force, but has not fallen and is not in need of assistance. As an example, the user may have been contacted during an athletic activity (e.g., bumped by another while playing basketball), but has not fallen due to the contact and is able to recover without assistance from others. Accordingly, the system 100 can refrain from generating and transmitting a notification to others.

In some cases, the system can determine that the user has fallen, but that the user is not in need of assistance. As an example, the user 110 may have fallen as a part of an athletic activity (e.g., slipped while skiing), but is able to recover without assistance from others. Accordingly, the system 100 can refrain from generating and transmitting a notification to others.

What is Apple Adding Now?

With a continuation patent, the changes are always restricted to changes and/or additions to the original patent claims of an invention. Firstly, Apple has reduced their patent claims count from 104 patent claims down to 39. The main addition consists of three patent claims numbered 19 to 21 with claim #21 being the key new claim that states that the Apple Watch is going to have more than one sensor supporting Fall Detection as follows:

Patent Claim #19: "The method of claim 1, wherein the computing device is a wearable mobile device."

Patent Claim #20: "The method of claim 19, wherein the computing device is a smart watch." Believe it or not but that wasn't clarified in past patent claims.

While Apple's patent doesn't explain why they're adding more brute power for the Fall Detection feature, you could be assured that Apple will be adding new health features that collects more data sets that it could forward to emergency services in the event of a major fall.

In addition, should Apple ever add some kind of camera to Apple Watch, for instance, Apple could technically have Apple Watch take photos of the surrounding area where a fall had occurred and pass that along to emergency service personnel so as to further assist their ability to find the injured party. That would certainly require more sensors, more processors, more AI and perhaps 5G.

Apple's continuation patent application 20200250954 that was published today by the U.S. Patent Office was filed back in April 2020. Considering that this is a patent application, the timing of such a product to market is unknown at this time.