The US Patent & Trademark Office published a patent application earlier this month from Microsoft that relates to computer graphics systems, and more particularly, to a microLED display system and the color management relating to HMDs and smartglasses.

Microsoft's HoloLens team appear to have their eye on moving some of their team to developing a next-gen follow-up to HoloLens being smartglasses. This directly puts Microsoft in a race with Apple, amongst others, in bringing a next category of wearables to market in the not-too-distant future.

What caught my eye about this patent application is their explanation as to why they think using microLED displays as lenses is going to be key to their smartglasses. Apple acquired LuxVue back in 2014, an industry leader in microLED technology. Six years later and we still haven't seen the fruits of that acquisition that may result in future displays for  Apple iDevice and perhaps, like Microsoft, use them in smartglasses. Are both Apple and Microsoft on the same wavelength for microLED displays? Only time will tell.

Microsoft notes in their patent background that "One area of computing devices that has grown in recent years is the area of virtual reality (VR) and augmented reality (AR) devices, which use a graphics processing unit (GPU) to render graphics from a computing device to a display device.

Such technology may be incorporated into a head-mounted display (HMD) device in the form of Microsoft's HoloLens, eyeglasses, goggles, a helmet, a visor, or other eyewear.

One challenge with incorporating display devices into HMD or mobile devices is the size constraints that limit some of the optical or display components that can be integrated into the HMD devices while miniaturizing the overall size of the HMD devices to improve user mobility.

These displays offer advantages such as high resolution, a wide color gamut, high brightness and a high contrast ratio. However, such digital projection systems that rely on LCoS or DLP technology require large form factors to create a uniform illumination of panels. This is what Microsoft's patent application addresses.

Microsoft's invention provides improvements in presenting images on a display with miniaturized components without compromising the display quality or user experience.

Microsoft begins by noting that "MicroLED arrays offer a small form factor solution for the HMD image sources since they do not need separate illumination optics. Features of a future device like smartglasses includes a MicroLED display system that incorporates a plurality of monochrome projectors (e.g., three MicroLED projectors) to generate three monochrome images (e.g., red, blue, and green images) that are separately input into a single waveguide of the HMD and combined to form an image that is displayed to the user.

Microsoft's patent then dives into a number of complicated scenarios of how they could approach a future smartglasses device that could be more appealing to consumers in contrast to their HoloLens HMD that is aimed at education and industry applications.

Microsoft's patent FIG. 1A below is a schematic diagram of a display device (e.g., HMD device) in the form of smartglasses; FIG. 3 is an example MicroLED display system that incorporate a plurality of monochrome MicroLED projectors to generate three monochrome images that are separately input into a single waveguide of the HMD. 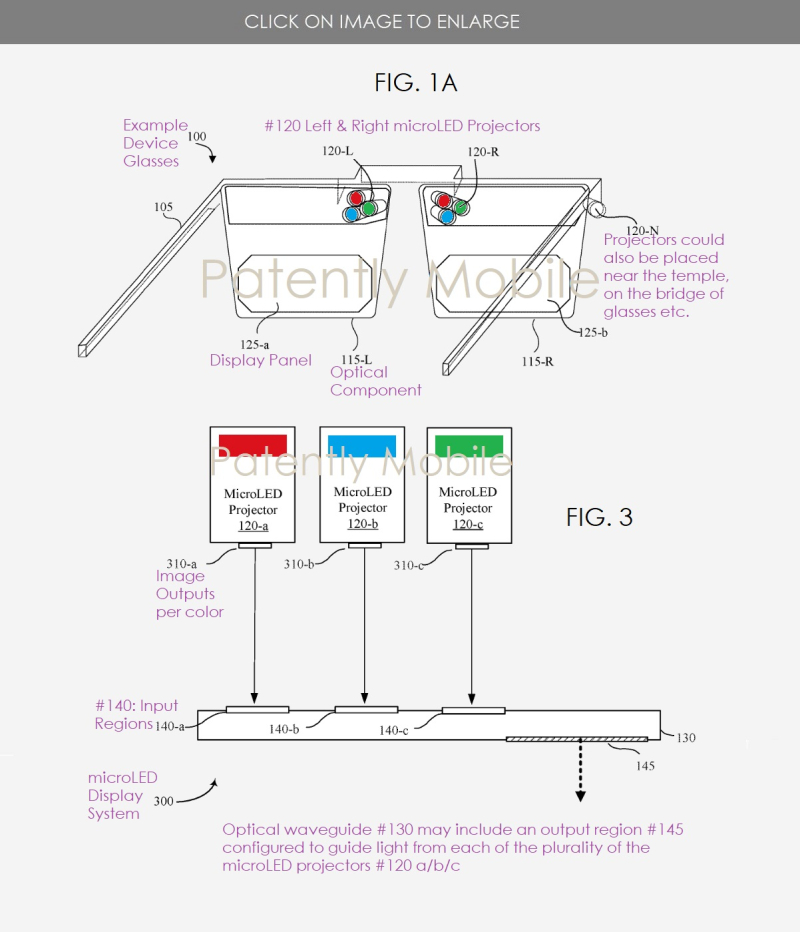 Microsoft's patent published earlier this quarter by the U.S. Patent Office was originally filed in Q1 2019. The inventors listed are from Microsoft's HoloLens team.

Microsoft will be introducing a new dual display smartphone branded the Surface Duo in September and next year they intend to launch a dual tablet device under the branding of Surface Neo.

So, it shouldn't be surprising to see that smartglasses could be on their list of products they're developing to get ahead of Apple again. Microsoft wants to win back the tens of millions, if not hundreds of millions of their one-time users that fled to Apple's iPhone and iPad. The only way to accomplish this is to develop innovative hardware that fans could be thrilled to own that is ahead of Apple.

Whether Microsoft will actually be able to beat Apple to market with Mixed Reality (MR) smartglasses is completely unknown at present. Though Microsoft's Chief Product Officer, Panos Panay, is passionately driven to make all attempts of doing just that.

To review Apple's HMD and smartglasses patents, check out our archives here.