Home Archives Contact Us Subscribe Twitter MeWe Facebook Patently Mobile
LG's CEO has Announced that they'll be Introducing a Smartphone in Early 2021 that will have a Rollable Form Factor
It's been Confirmed that Apple's CEO Tim Cook will be Joining Bezos, Zuckerberg & Pichai at Antitrust Hearing in late July

While the UK Markets Regulator wants Apple to give their customers a list of options for Browsers, Apple has already acted on this at WWDC20 In late November 2019 Patently Apple posted a report titled "The Questions posed to Apple by the Antitrust Subcommittee are made Public covering Repairs, Google's Search Engine Deal +." While there were series of questions posed to Apple by the Antitrust committee, two of them were a) Why did Apple build its own Maps app to compete with Google b) How much has Google paid Apple to be the default search engine." The U.S. isn't the only interested party when it  comes to the Apple-Google deal for search, as the UK Markets Regulator has now weighed-in on the matter.

It's being reported by Reuters that "UK markets regulator said in a report released on Wednesday that the payments by Alphabet Inc’s Google to Apple Inc to be the default search engine on Apple’s Safari web browser create “a significant barrier to entry and expansion" for Google’s rivals in the search engine market."

Who are these rivals? They happen to be Microsoft's Bing, Yahoo (owned by Verizon Communications) and independent search engine DuckDuckGo, all of which also make payments to Apple in exchange for being search engine options on its devices, the report said.

Apple received the "substantial majority" of the 1.2 billion pounds ($1.5 billion) that Google paid to be the default search engine on a variety of devices in the United Kingdom in 2019, according to the report.

In the report, the U.K. regulators said enforcement authorities should be given a range of options to address the Apple-Google arrangement, including requiring "choice screens" in which users decide which search engine to set as a default during device setup or restricting Apple’s ability to monetize default positions.

Apple told the regulators that monetization restrictions would be "very costly," according to the report. For more, read the full Reuters report.

The report's findings are a little behind the news that Apple announced or revealed during their WWDC20 event. Our report's cover graphic shows a slide presented at the event where in Apple reveals "Set Default email and browser apps." Below you'll find an enlargement and the message highlighted in yellow. 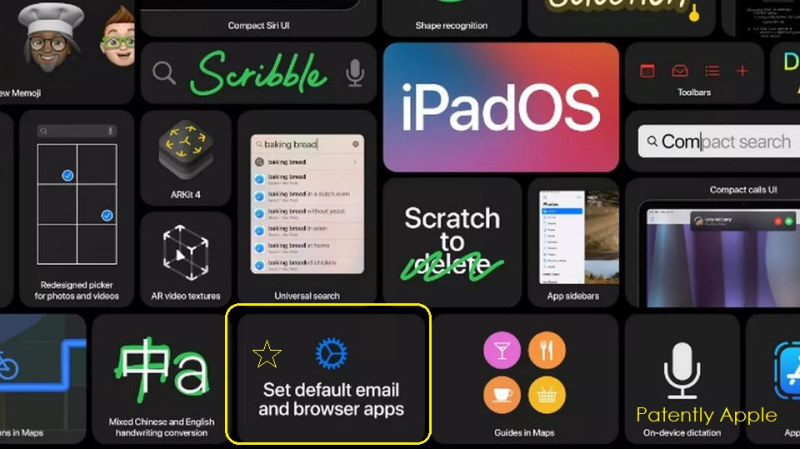 With Apple having a contract in place for the default search on iDevices, it may take more time for that issue to be dealt with unless the U.S. and other antitrust bodies force the issue with Apple and fine them heavily. So stay tuned, this issue isn't over just yet. Though it's clear that Apple had seen the writing on the wall and decided to act before being forced to.