Home Archives Contact Us Subscribe Twitter MeWe Facebook Patently Mobile
With Foxconn likely to expand an iPhone plant in India worth 1-Billion, Google announces a commitment of 10-Billion in India
Apple informed employees that a full return to work in 2020 is unlikely while they committed $400 million towards California's Housing Crisis

There's a lot of activity going on in the smartglasses race to stay on top of these days and Samsung's latest Patent from their R&D Lab in India sheds a little light on their thinking about a smartglasses user interface. With Huawei getting the leap on them with their smartglasses launch last year, Samsung is racing to play catch-up with their #1 competitor.

Though before we jump into Samsung's patent, let's catch up with the race that's currently in-play with some of the likely future leaders in this emerging smart-device category that will be driven by 5G networks.

In early June Patently Apple posted a report titled "Facebook is determined to stay ahead of Apple on HMDs and Win the Race on being first with Smartglasses to replace Smartphones." Our report pointed to Facebook working on smartglasses with the advanced microLED, a display that leapfrogs mini-LED that Apple may use in future MacBooks and the iPad Pro. Facebook is also working on their own OS so that their hardware won't be held back by Android or iOS.

Then in early July we posted another report titled "Knowing what Apple's Research Team is up to for Next-Gen VR/AR Devices, Facebook Reveals their Next-Gen Glasses with Holographic Lenses." Here we learned about two major eyeware projects well underway at Apple under the direction of Mike Rockwell.

We also covered how Apple may be developing a modular smartglasses form factor where Apple could launch three models. The side frames or "temples" could contain varying amounts of sensors and features as a means of differentiating one model from another at different price points. The report also presented advances that Facebook was considering for the future, including the use of holographic lenses which are brighter than microLED displays.

Another serious Apple competitor for smartglasses is Google who just acquired a Canadian company by the name of North with a product called "Focals." North has AR Glasses today that are functional and offer those with prescription lenses the ability to make them AR lenses. Google not only gained an instant foot into this next-gen product but also 650 high quality patents for AR glasses from Intel that was part of the deal.

Another competitor of Apple's surprised the market last year by launching their first generation of smartglasses. Huawei partnered with Korea's Gentle Monster. A video of the new glasses is presented below.

Of course if Apple is pursuing smartglasses, then you can be assured that Samsung is going to enter that market as well and likely ahead of Apple. Our Patently Mobile blog has covered at least three Samsung patents for future glasses to date (01, 02 and a clunkier model here).

Samsung's latest patent application that popped up last Thursday at the U.S. Patent Office illustrates how they perceive users will interact with a simplistic User Interface to switch between apps that are akin to their smartwatch.

Interestingly, for this invention, Samsung turned to their Advanced Technology Lab in Bengaluru India with Mr. Gupta and Mr. Jatram being listed as inventors.

The patent gives the distinct impression that the user interface (UI) for their smartglasses will in certain ways share similarities to their Galaxy Watch UI. Yet with the glasses, the dial mechanism in the form of an app wheel would be set under the surface of the bezel/frame, invisible to the public. As the app wheel is turned by the user via touch, the user will be able to see the app choices displayed in their glasses and with one push on the wheel, the app will open.

Both Apple and Google see it differently. Google's "Focals" smartglasses currently uses a ring accessory device that controls the UI. One of Apple's patents that has already been granted twice foresees a similar approach controlling a future device interface.

Below are a few of Samsung's patent figures related to their future smartglasses. 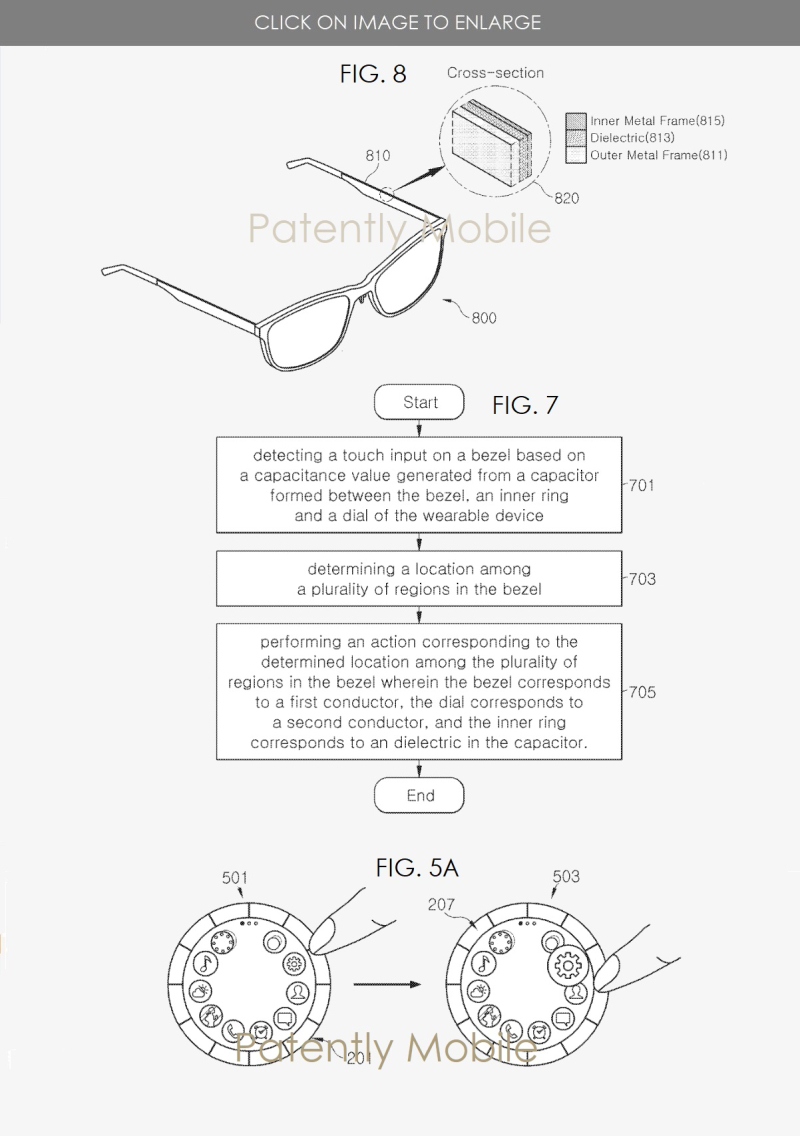 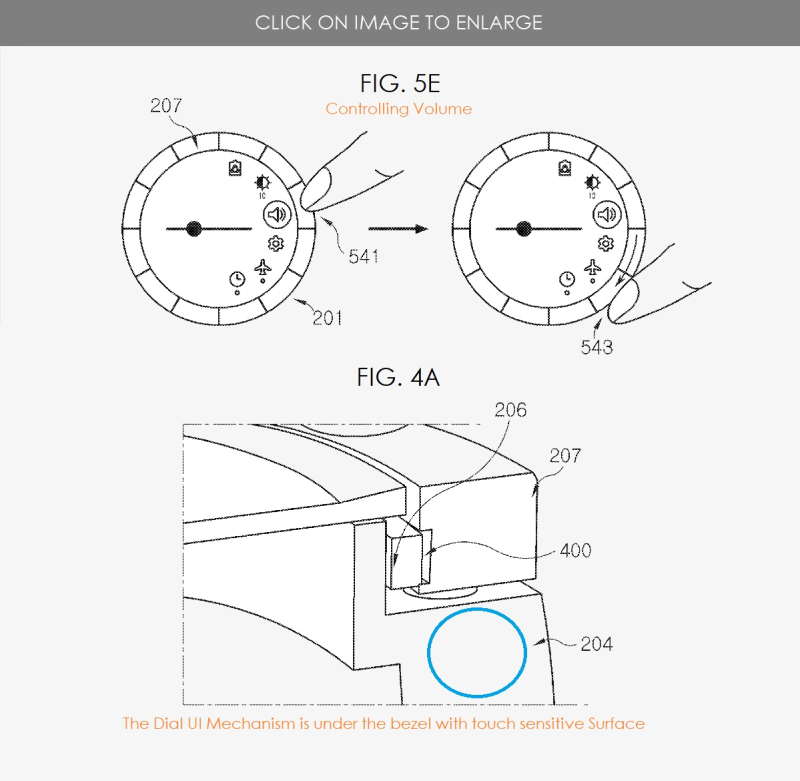 At present, Apple is known for their inventive user interface mastery and if they can deliver a winner here, they'll be able to gain an early lead and set the standard. As for Samsung, it appears that they're not going to use Android or Wear OS. Instead Samsung is likely to use their own Tizen OS which has been praised for being faster and smoother than Wear OS from Google. The advantage to Tizen is that it will tie into all of Samsung's home appliances from fridges to TVs, washer and dryers and more. It will be more in-tune with the IoT market and Home Automation. Could it be a winner? Only time will tell.

At present, the big brands such as Apple, Facebook, Google, Huawei and Samsung are on record pursuing smartglasses. While Microsoft may enter this market at some point in the future, we know that the majority of Chinese OEMs are simply waiting to see who to copy en mass when the time is right.

Until the war for smartglasses truly begins in the market, Patently Apple will continue to cover major patents by most industry players to keep you up-to-date on new concepts, technologies and more that will shape this new emerging product category. Knowing what the competition is up to is always interesting but more so on emerging devices.