Samsung is to Introduce Blood Pressure monitoring on the Galaxy Watch to get ahead of Apple Watch, and Microsoft may be next 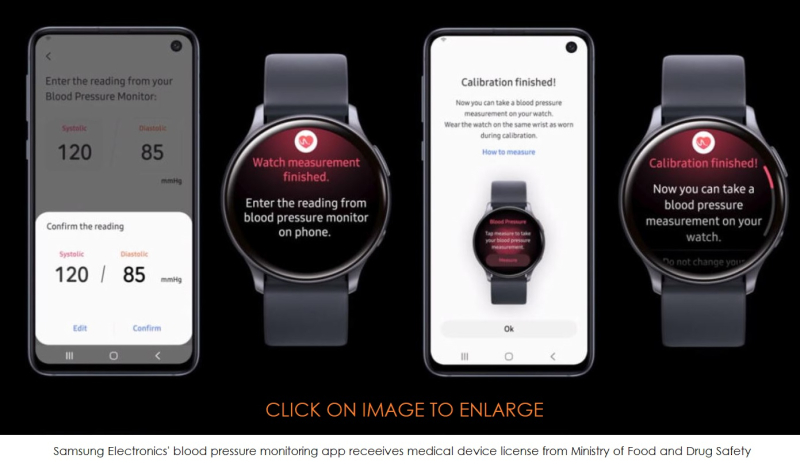 The Apple Watch started off as a crazy expensive luxury watch available in gold for between $10,000 and $17,000. No matter how hard Apple tried to make that work by using celebrities like Beyoncé and others to market it, it was a gigantic flop. Apple's executive team rushed to change the focus of Apple Watch towards being a health device. It's here where Apple Watch struck a vein in the heart of heath conscience consumers. Now Samsung and perhaps even Microsoft want to challenge Apple Watch with new health features like measuring blood pressure. 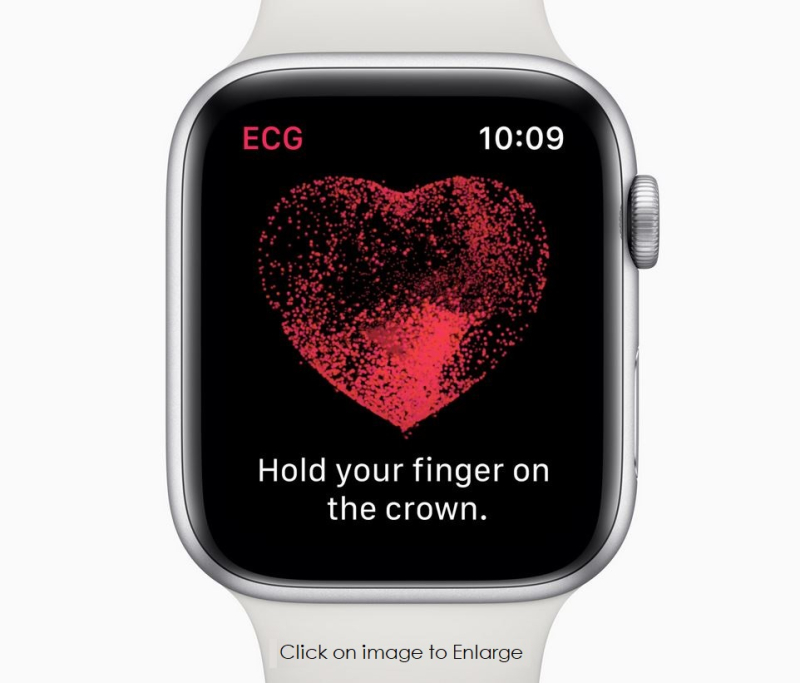 As usual, Samsung went into hyper-mode to bring the ECG to the Galaxy Watch. Patently Apple covered Samsung's patent application for this feature and updated our report two days later with a photo of the actual Samsung feature being announced for their Galaxy Watch Active2 as presented below. 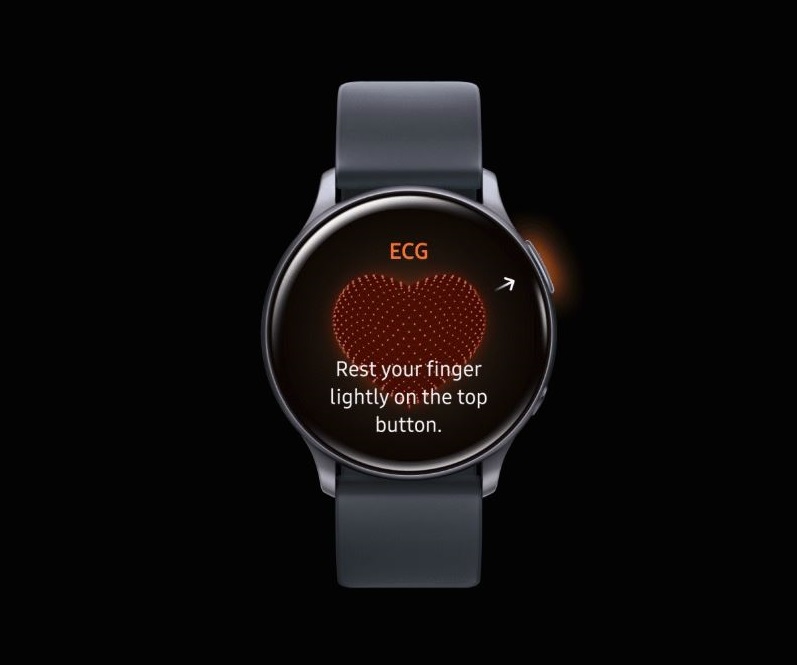 To get ahead of the Apple Watch, it was announced in June that Samsung's Galaxy Watch Active2 is to include the ability to measure blood pressure, starting in South Korea, as presented in the video below.

While the ink just dried on Samsung's marketing for their new ECG and Blood Pressure features (in South Korea), a Samsung patent application surfaced at the U.S. Patent Office this past week illustrating that they have invented an accessory device to assist consumers monitor their heart closer with a pocket-styled ECG device as shown in their patent figures 3A and 3B below. It can also be on clips on a shirt (not shown). You could check out Samsung's patent 20200205732 titled "Wearable Electrocariogram Device" here. 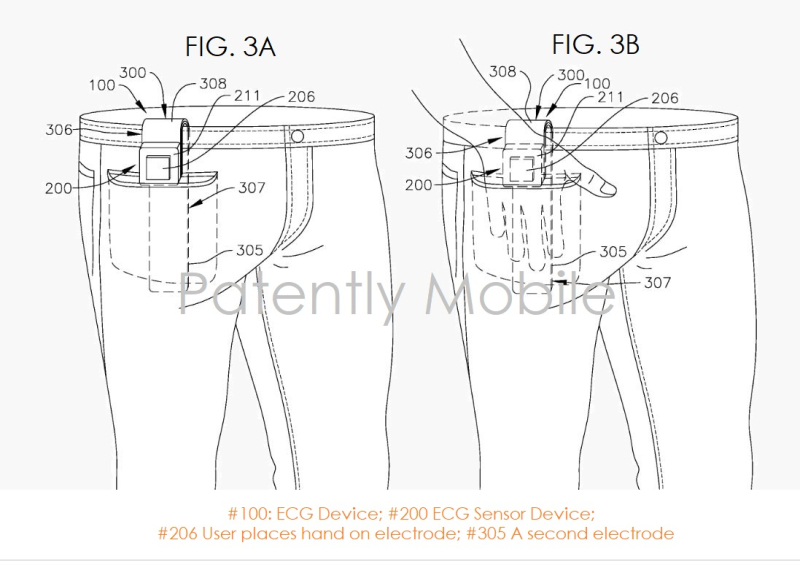 Microsoft introduced a fitness band in 2014 and basically discontinued it in 2016. It now appears that they wish to make a run at the Apple Watch, and more specifically, designing it to challenge Apple regarding health features. A new in-depth granted patent was issued to Microsoft this week by the U.S. Patent Office titled "Wearable pulse pressure wave sending device."

Microsoft begins with an overview of the issue that their smartwatch is to address. Microsoft states that Heart disease is the leading cause of death in the United States, accounting for around six hundred thousand deaths per year (nearly 31% of reported deaths in the United States). High blood pressure (hypertension) is one of the most well-understood risk factors for heart disease.

Hypertension is a risk factor for stroke, heart attack, heart failure, arterial aneurysm, and is the leading cause of renal failure. In the United States alone, it is estimated that hypertension incurs billions in direct, yearly healthcare costs, and nearly 1,000 deaths daily. Hypertension is a significant public health issue, and nothing would save more lives than getting blood pressure under control.

Unfortunately, hypertension has no visible warning signs or symptoms, and many people do not even realize they have it. This is particularly unfortunate because hypertension is treatable: lifestyle changes, specifically diet and exercise, are known to be effective in preventing the progression of hypertension. Moreover, numerous medications are available to treat hypertension. Therefore, the key to preventing many heart disease-related deaths may simply be awareness of the risk.

Despite this, blood pressure readings have not gained much attention in the consumer space. Hypertension is still typically identified through infrequent screening (e.g., at an annual exam, health fair, etc.) or when seeking healthcare for an unrelated medical issue. 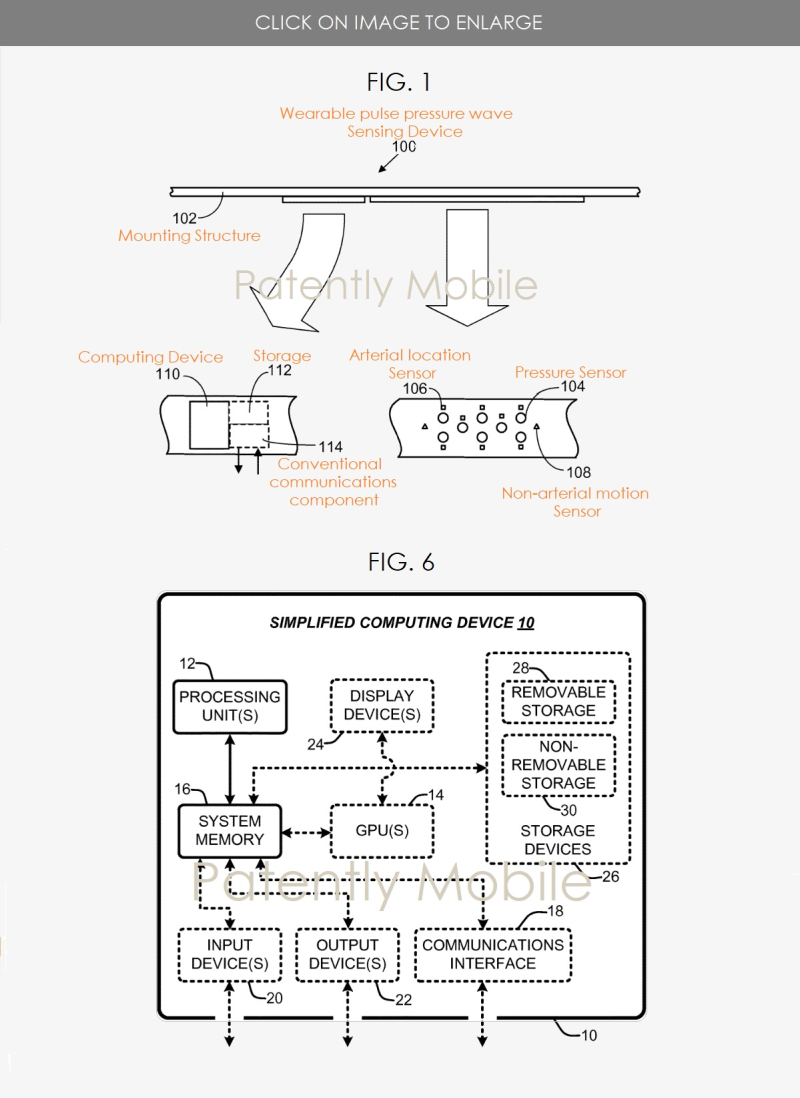 In the wearable pulse pressure wave sensing device implementations, where the device attaches to a user's wrist, the PTT refers to the amount of time it takes for a pulse pressure wave to travel from the user's heart, through their arteries, to an artery on the wrist (e.g., radial artery).

More specifically, Microsoft granted patent notes that "A wrist-band takes the form of a so-called  'smartwatch' with all its attendant computing, display and communication capabilities. It is noted that given the user interface capabilities of a smartwatch, the wearable sensing implementations can be configured via conventional means to display information to the wearer. For example, instructions for operating the wrist-band implementations can be displayed to the user, as well as the computed cardiovascular metrics."

Microsoft's patent FIG. 6 above is a diagram depicting a general purpose computing device constituting an exemplary system for use with the wearable pulse pressure wave sensing device implementations. In FIG. 6 Microsoft illustrates the possible use of multiple GPUs which is another sign that their engineers were focusing on a smartwatch and not a fitness band.

Identifying the Pressure Sensor Closest to the Identified Location

It would appear that Microsoft understood that their fitness band wouldn't be able to handle advanced health monitoring needed to challenge the Apple Watch and needed a fresh start with a more solid foundation as a smartwatch.

On the other hand, Microsoft may have dropped the project in its entirety realizing that the Apple Watch was far too established in the market and that they were too late to the party. That may be the reason why they leapt to develop  their next generation devices like the dual display tablet (Neo) and dual display smartphone (Duo) that will be introduced in 2021. Something where they're not in Apple's shadow all of the time.

At the end of the day, the question remains: will Microsoft decide to re-enter the race with a smartwatch so as to challenge Apple Watch in 2021 or will Samsung and Huawei be the only real challengers remaining? Only time will tell.