Today, Finland’s Nokia launched a set of tools for data center networking, developed in cooperation with Apple and other leading companies to assist companies around the world manage the growth in traffic as next-wave services including 5G, machine learning and more begin to roll out.

As the usage of 5G networks expands, vast quantities of data will be generated as more household appliances and other machines are linked up with sensors and artificial intelligence tools, creating the so-called "internet-of-things."

Steve Vogelsang, Nokia’s chief technology officer for IP and optical business: "We worked very closely with (Apple) over the last two plus years to understand their requirements." For more on this, read the full Reuters report here.

While the Reuters report pointed to the new Data Centre Networking tools being used for handling 5G, AI and IoT services, the additional market that Nokia listed in their press release was AR/VR applications and devices. A market that just happens to also be key market that Apple is eyeing over the next few years.

It was recently revealed that Apple had  a secretive group within Apple assigned to develop one or two cutting-edge headset products such as AR glasses and a MR Head Mounted Device.  The latter being designed to deliver deep virtual worlds for games, concerts, sports and more that demands heavy graphics and cutting edge displays, and more importantly, a cutting edge reliable 5G network. Apple's first 5G iPhones launch later this year to get the ball rolling.

"Nokia has redefined data center fabrics with the launch of a new and modern Network Operating System (NOS) and a declarative, intent-based automation and operations toolkit.

This will allow cloud and data center builders to scale and adapt operations in the face of year-over-year exponential traffic growth and constant change brought on from technology shifts like 5G and Industry 4.0.

The new Nokia Service Router Linux (SR Linux) NOS and Nokia Fabric Service Platform (FSP) were co-developed with leading global webscale companies, including Apple, who is deploying the technology at its data centers," starting with their Denmark facility." So it's not a pure Nokia + Apple development, but rather a development from all those in the press release.

The press release further noted that Apple was the first of eight testimonials found in the press release. "Adam Bechtel, Vice President and Networking lead at Apple, is noted saying: "We regularly upgrade our data center equipment with technology to increase efficiency and reduce energy consumption. Using Nokia's new system will enable better networking and routing capabilities in our Viborg, Denmark facility."

Nokia added in their press release that "Apple is an early adopter of the innovative technology, deploying the solution within its cloud operations in its data centers."

By agreeing to be listed in Nokia's press release as an early adopter, Apple has provided Nokia's new data center OS and tools with a great PR endorsement that the top technology brand in the world has chosen Nokia; A powerful weapon that could be used in presentations against Huawei when in a competitive situation.

Patently Apple posted a report in February titled "The U.S. Attorney General reveals that a U.S. Consortium may take a Controlling Stake in Nokia and/or Ericsson for 5G." While that was never going to happen, the message was clear that it would be in the interest of the U.S., the EU and the Commonwealth to lock Huawei out of controlling the world's 5G infrastructure. It was also a move for security reasons and to ensure that Western countries controlled the next generation of advanced services that would drive their respective economies.

In late February the news source LightReading posted a report that provided the chart presented below. The report noted that "Last year, Vodafone CEO Nick Read estimated that Huawei had 28% of Europe's mobile infrastructure market, with Ericsson on 27% and Nokia on 23%. Out of the 239 5G deals the three vendors boast internationally, Huawei has 38%, Ericsson 34% and Nokia 28%. Combined, Nokia and Ericsson has more share than Huawei and Western companies want to keep it that way. 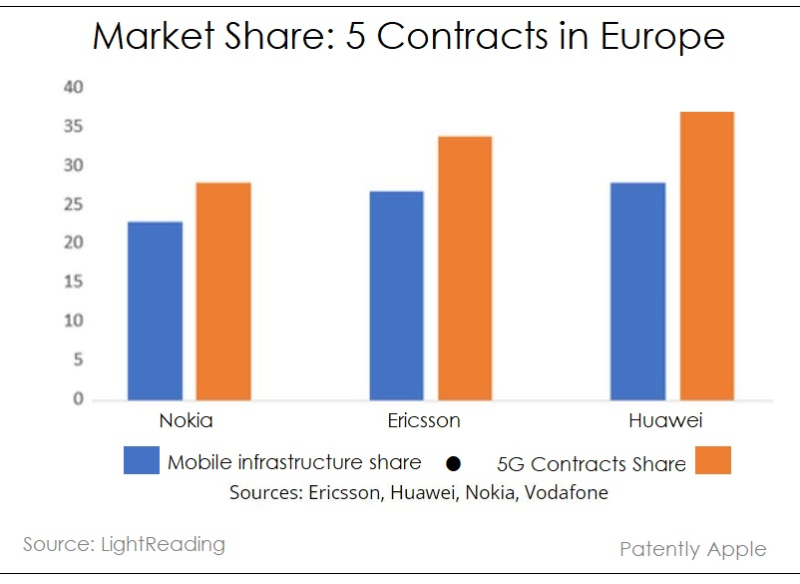