Home Archives Contact Us Subscribe Twitter MeWe Patently Mobile
The Apple TV+ Season 2 Trailer "For All Mankind" is now out
In Q2, Apple had a Monster iPhone Quarter in China with Growth more than 2.3 Times that of Huawei without a 5G smartphone 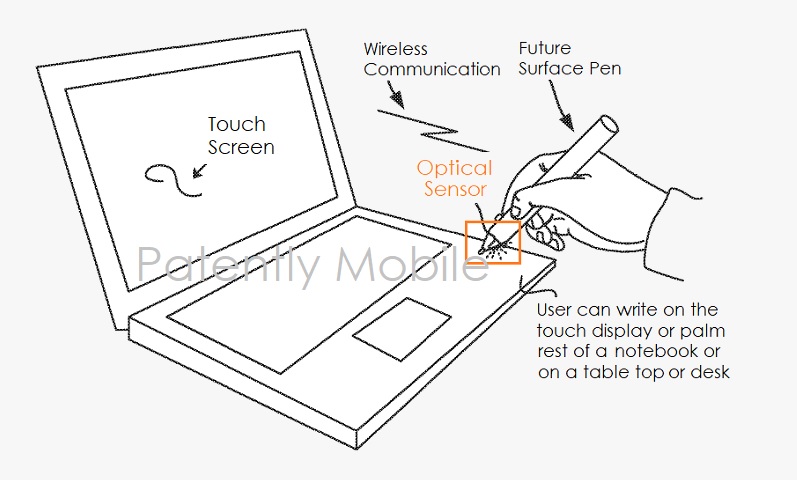 Microsoft has "borrowed" ideas for their products from Apple patents over the years. The most notable being a hybrid MacBook (2013) that Microsoft brought to market as the Surface Book years later as presented below. 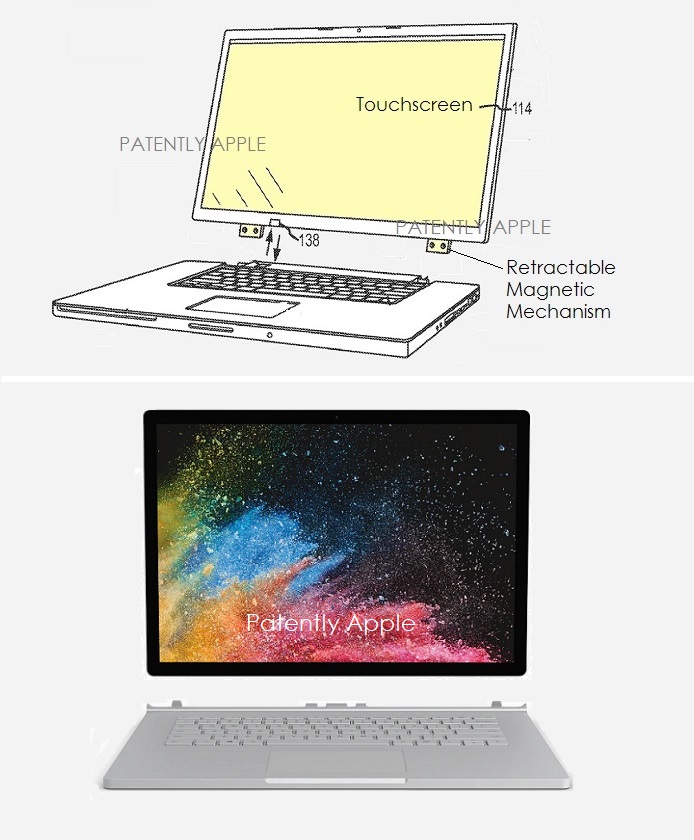 Earlier this month Microsoft was granted a patent for a next-gen Surface Pen that will allow a user to add a quick drawing, a scribble, a signature or handwritten annotation right unto the surface of a notebook's palmrest area that would be wirelessly transferred into the document that they're working on. The main patent figure supporting this could be seen in our cover graphic above and another towards the bottom of this report.

This would also be a great idea for the iPad Pro with smart Keyboard and MacBooks. While both Apple Pencil and Surface Pen were designed to work with tablets originally, advancing these tools to write on other hard surfaces to add content to a document would give these respective tools more value.

Apple has come close to this idea themselves in a patent application made public this past May. They're engineers envisioned adding drawing capabilities to a future keyboard as a snap-on accessory via a mini magic trackpad for an iMac as presented in the patent figure below. 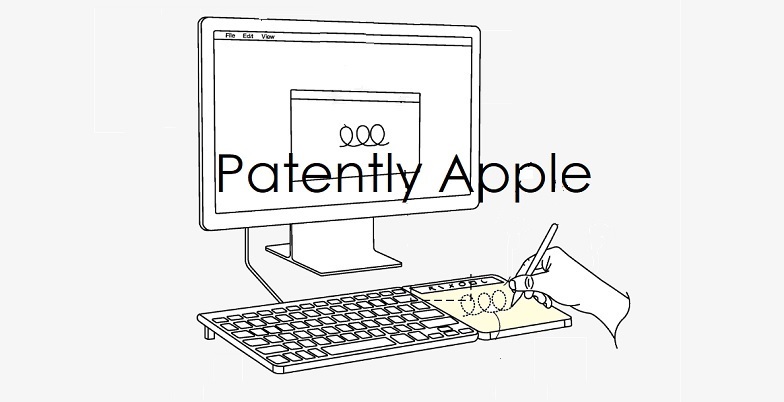 Having the palmrest of a future MacBook offer this functionality like Microsoft's patent describes, shouldn't be difficult to implement. Whether Apple sees this idea as one offering value is another matter, though they do have other concepts on record that offer the same value for a future iPad Pro folio.

For example, Apple was granted a patent last May that clearly illustrates this concept of adding pen input in with a keyboard as presented below. 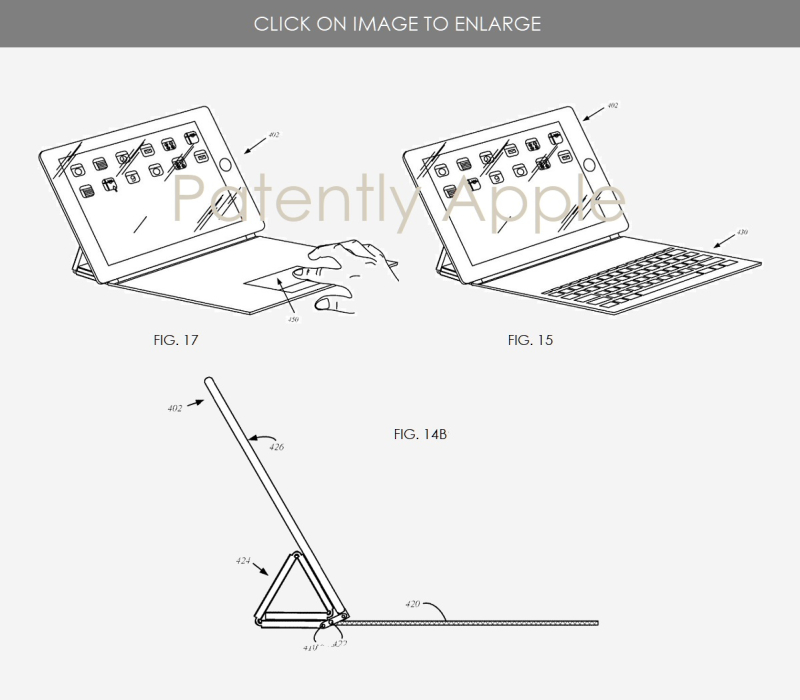 For this concept, both Apple and Microsoft have a similar idea and both would be great to add to their respective product lines in the future. If need be Apple should "borrow" the idea in some ways just as Microsoft borrowed Apple's Hybrid device patent.

Beyond the commonality of advancing the basics of a future pen or pencil, Microsoft's patent goes one step further by adding new functionality that is referred to in their patent filing as an in-air mouse for PC's and tablets.

The eraser-like end of the Surface Pen could act as this in-air mouse as shown below. It is also described offering joy-stick functionality that technically could work with games. And lastly, the pen could also be used as an in-air gesture device. 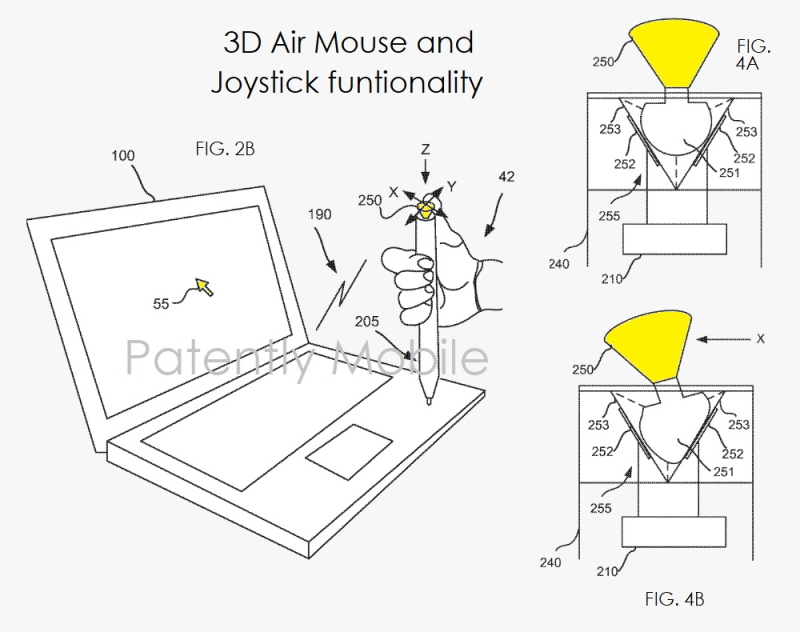 Microsoft's patent FIGS. 4A and 4B above illustrate a schematic drawing of an example pointing stick sensor in a neutral and pushed positioned respectively. Optionally, the pointing stick may be connected to an elastic or compressible element that is housed in a pyramid structure.

Microsoft's patent that was granted earlier this month was filed back in 2017. One of the inventors on this patent is Mr. Kaplan who is the leading HW designer at Microsoft.