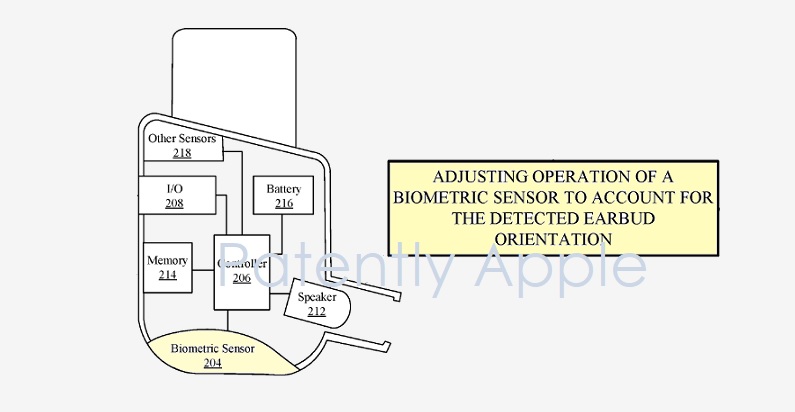 Before there was ever a whisper or rumor of AirPods of any kind integrating heart rate monitoring, there was a patent, in fact a series of patents. Patently Apple posted a 2017 patent report titled Apple Continues Work on Future Sports Oriented AirPods with Biometrics & Noise Cancellation Features. The report noted that "Biometric sensors associated with this device could include a range of sensors including a heart rate sensor, a VO2 sensor, a GSR (galvanic skin response) sensor, an electrocardiogram (EKG) sensor, an impedance cardiography (ICG) sensor and a temperature sensor. Our cover graphic was presented in that report. That particular report pointed to the history of Apple discussing heart rate monitoring for future earphones in patents dating back to 2009. There has been a series of patents published in between on this subject matter. Today the rumor du jour has arisen from sources in Taiwan about Apple's next-gen AirPods Pro including biometrics.

The report noted that the AirPods series has been the most successful iPhone accessory in recent years. Up to now, the product line has only released three products, but this does not affect its sales at all. Prior to this, the third-party research company Strategy Analytics issued a report saying that the shipment of AirPods in 2020 will reach 90 million. Although many analysts questioned this, the commercial value of AirPods is real.

Last year, Apple launched AirPods Pro , the first noise-canceling headset in the AirPods product line . Once launched, it became a benchmark product, and now there is news that its successor is on the way.

A rumor surfacing today is that Apple is currently planning to start producing the second-generation AirPods Pro in 2021. In addition to Luxshare Precision, the foundries include Inventec and GoerTek.

It is understood that the new AirPods Pro will be equipped with new sensors including one to monitor heart rate.  For sports enthusiasts, heart rate monitoring is the ticket to sports headphones, which also shows that Apple hopes to impact the sports headphones market through AirPods Pro.

Today a Digitimes rumor suggests that the advanced AirPods Pro will surface in the second half 2021.