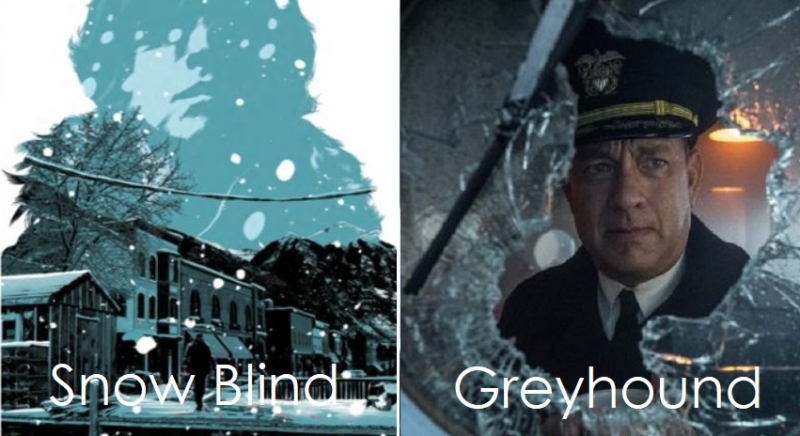 Apple’s head of worldwide video’s Zack Van Amburg and Jamie Erlicht are on a roll for Apple TV+ having landed yet another hotly contested movie. In a highly competitive six-way bidding war, Deadline reports that Apple Studios has acquired Snow Blind, a thriller adaptation of the BOOM! Studios graphic novel by Ollie Masters (The Kitchen) and Tyler Jenkins. The movie will star Jake Gyllenhaal.

On July 1 Patently Apple posted a report titled "Apple won Bidding War for 'Emancipation' at more than $105 Million, Filming to begin in Early 2021.

Back in May we learned that Apple won another bidding war for the Tom Hanks film "Greyhound"  from Sony.

In early June Patently Apple posted another report titled "The Exciting Summer Popcorn Movie called 'Greyhound' is set to be released on Apple TV+ on July 10."

Yesterday Apple launched Greyhound on cue, and yes, it was indeed an exciting summer popcorn movie. At times this film was set at a heart-pounding pace that sucked you right into the action that was brilliantly filmed.

Back during WWII, Germany's U-Boat submarines didn't have guided-torpedoes, thank God, and U.S. military ships had to dodge incoming torpedoes mostly by sight. The Commander of the ship had to communicate quickly and precisely to his engineers how to steer the ship so as to avoid being hit. It became a nightmare at night when incoming torpedoes couldn't be physically seen as well using night flares.

Tom Hanks played the Commander of the USS Keeling (call sign “Greyhound”). The character Krause is a career sailor who is crossing the North Atlantic for the very first time in 1942. When asked how many crossings he had navigated before in the Atlantic, Krause reveals that it's his first crossing. His crew hearing this are clearly seen as worried, as to get through the enemy lines required great skill and experience.

The whole journey is tense, make no mistake about it. The action swells when the U-boats draw close, but the convoy won’t actually be safe until the journey is complete, as is clear from the stress Krause is constantly facing.

I rarely watch new WWII movies but this was exceptional and when it was over, it was like what you feel exiting a great amusement park ride: I wanted more as it was way too short a ride for me. I definitely wanted more. Hanks deserves applause for how he controls his character that has to stay awake for days on end without sleep.

I disagree with film critics like Roger Ebert who gave the film two thumbs down.  Greyhound provides us with a snippet of history in a tense yet highly entertaining way. It provides us with a clear sense of what it must have been like for the crew on the frigidly cold Atlantic during WWII. More importantly, it gave us a realistic sense of the fear the crew must have experienced being hunted 24/7 for days on end.

And lastly, the movie's sound and choice of music added to the intensity of the film and at times delivered an eeriness that added to the film's magic.

In the end, while Greyhound is highly entertaining, it's a somber reminder that 3,500 cargo ships were sunk with over 72,000 people killed by U-Boats alone during WWII.

If you haven't seen it yet, I highly recommend that you do, as it's truly a great film that draws you into a moment of history that was truly terrifying.