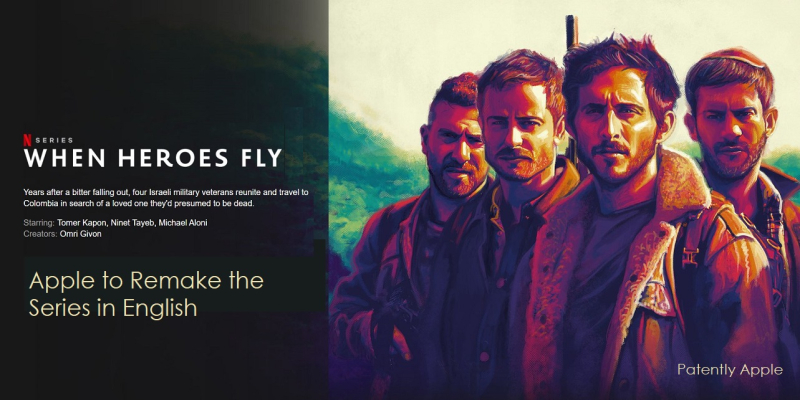 The Israeli hit TV show When Heroes Fly that went on to win the Best Series Award at the first Cannes Series Festival in April 2018 has been sold to Apple TV, which will remake the series as part of its international streaming service, an Israeli publication reports. Apple will reportedly rename the series "Echo 3."

The series, created by Omri Givon and based on the best-selling novel of the same name by Amir Gutfreund, tells the story of four friends who, 11 years after having a major falling out, reunite on a mission to find the missing – and long believed dead – sister of one of them, who is also the former lover of one of the friends.

Set deep in the Colombian jungle, the story takes them on a journey of self-discovery and forces them to confront their own demons to find peace.

I was convinced that I had reported on this before, but didn't. The reason that the plot was so familiar to me was that I had seen a trailer of it on Netflix who had acquired the international broadcasting rights for the series; whose second season is currently in production. Our cover graphic is from Netflix.

Netflix will keep the original series name and if we're lucky dub it in English. In contrast, Apple will professionally remake the series in English.

I for one appreciate that Apple will spend the time and money to remake the story in English and to ensure the film quality is superior. One of the key beefs that I currently have with Netflix is that half or more of their shows are given English titles but in reality the shows themselves are foreign and most with English subtitles only.

For instance today Netflix has on my opening screen the film "Dark Desire." The title is clearly English with no warning that the series isn't in English at all. It's a series in Portuguese with only English subtitles. What a waste of time!

So two-thumbs up to Apple for taking the time to ensure that their new series will be properly remade in English.

Apple has made a series of deals for Israeli content over the last year as reported on:

02: Uma Thurman is to Star in a new Drama for Apple TV+ that is set in the Middle East