In early June Patently Apple posted a report titled "Samsung files a patent addressing OLED Burn-In issues Specifically aimed at Smartphones with Under-Display Fingerprint ID." While burn-in has been a minor issue on smartphones, even Apple has warned of this issue. With Touch ID under the display, the issue could be more pronounced. Apple's patent pending solution published today by the U.S. Patent Office relates to Fingerprint ID under the display and a two-step method so as to control the temperature of the display in the Touch ID area.

The optical fingerprint sensor can, for example, be an organic optical detector (OPD) imager such as a thin-film-transistor-based (TFT-based) OPD imager, a PIN diode-based photodetector, and/or another photodetector. A TFT-based OPD imager is an OPD imager that is fabricated on a TFT-based electronic readout backplane.

In one or more aspects, the subject technology is directed to methods and configuration for temperature compensation in an optical-fingerprint detection system.

Apple's patent FIG. 10 below is a flow diagram illustrating an example method #1000 of temperature compensation in an optical-fingerprint detection system; FIG. 11 is a block diagram illustrating a wireless communication device (iPhone #1100), within which one or more aspects of the subject technology can be implemented. In one or more implementations, the device (an iPhone or Apple Watch) hosts an apparatus of the subject technology including an optical-fingerprint detection system. 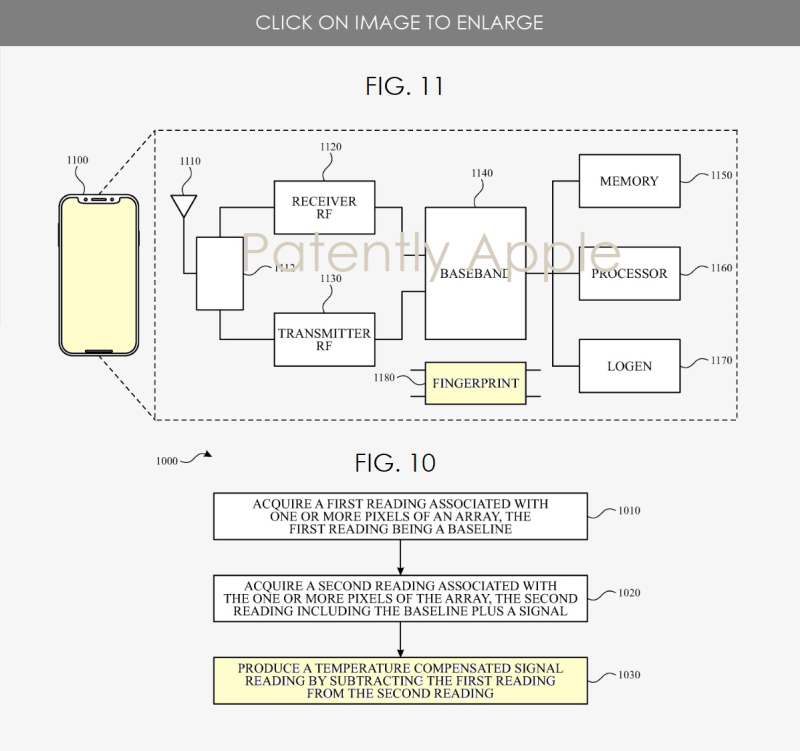 Apple's patent application that was published today by the U.S. Patent Office was filed back in Q4 2019. Considering that this is a patent application, the timing of such a product to market is unknown at this time.