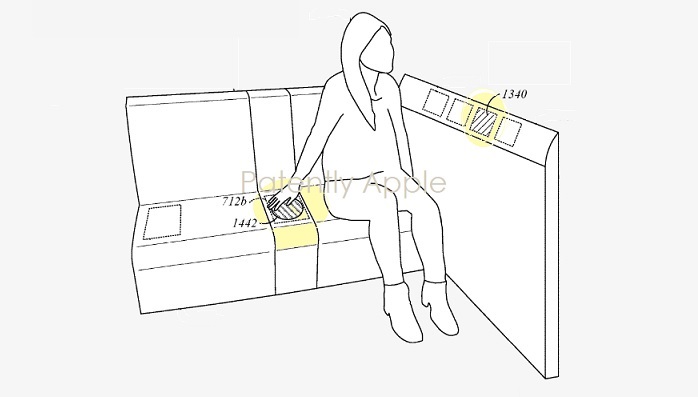 Sometimes in order to understand a new patent application you have to understand how it relates to another part of the larger project so that the pieces of the puzzle fit together. Yesterday, the US Patent & Trademark Office (USPTO) published a patent application from Apple relating to "Project Titan," the company's long-term project related to semi-autonomous and autonomous vehicles including electric vehicles.

In May Patently Apple posted a report titled "Apple Wins cool Car Patent for Backseat Passenger Interfaces that are hidden in the seats, Side Panels & more." The series of patent figures from that patent are presented below so as to provide you with visuals that will assist you in understanding a patent application published yesterday by USPTO. 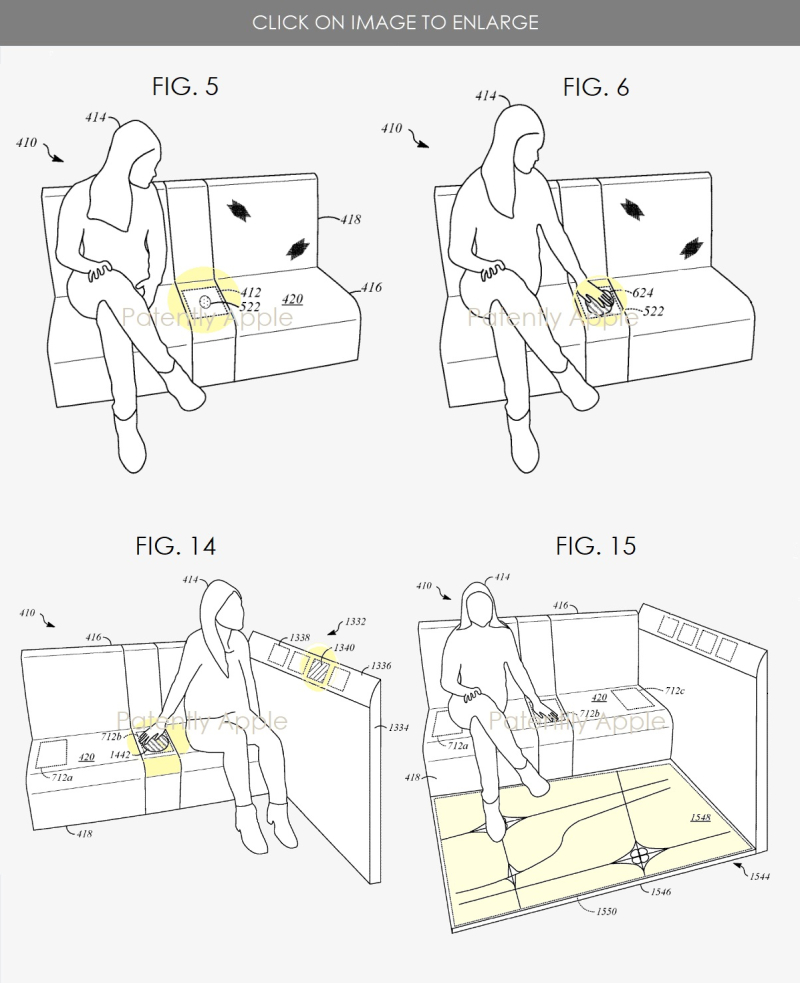 The patent figures above provide us with a context that this part of the project is about providing future vehicles with invisible controls to open vehicle windows, to play music, to set temperature controls and future ideas like activating a TV or CarPlay display that may be hidden in the dashboard. Other controls will be found on interior doors, on passenger seats and even on  a vehicle's flooring.

Below are patent figures from yesterday's patent application that builds on May's more impactful patent. 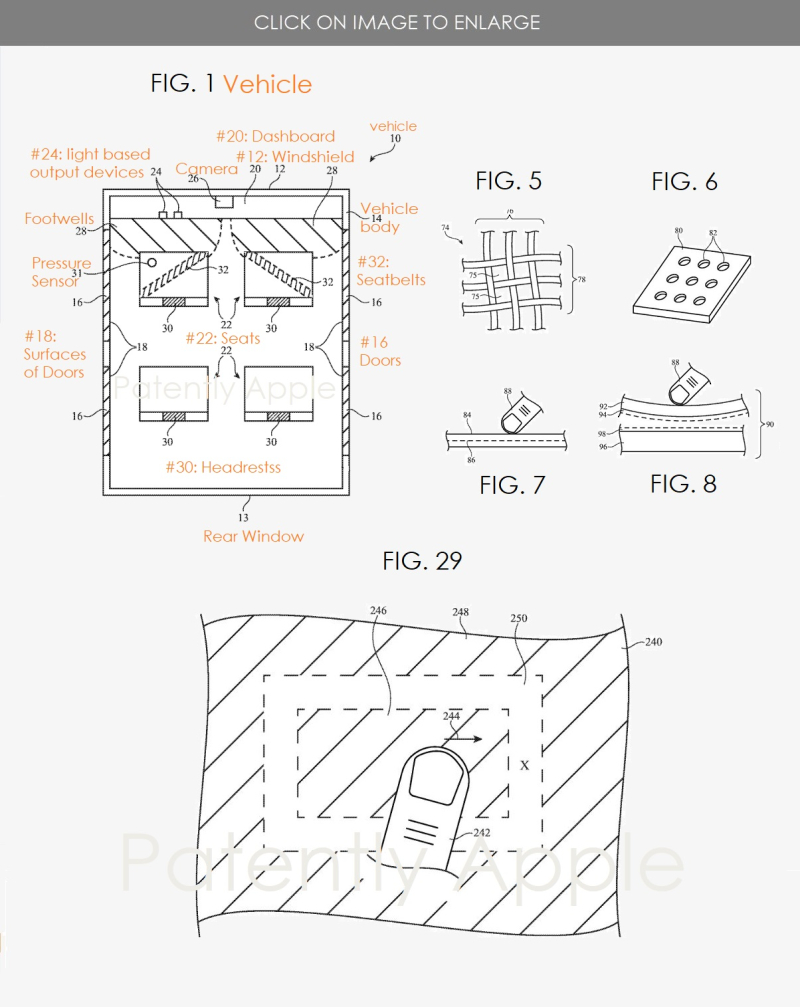 Apple's patent FIG. 29 above is a top view of an illustrative display that has configurable smooth and sticky regions formed by vibrating the display at different frequencies as a user's finger moves across the display.

Overall, Apple's invention covers a light-based output device that may be used to display images, symbols, and other information for a user of a system such as a vehicle. A display may be formed from a display layer, a covering layer that covers the display, and intervening structures such as force and touch sensors and electronic shutters.

The covering layer may be formed from leather, fabric, wood, plastic, metal, fiber-composite materials, and other materials. The display or other light-based output component may generate light that passes through the covering layer.

The covering layer may have an array of perforations or other openings to allow light to pass from the display and/or may be formed from layers of opaque material such as wood that are sufficiently thin to allow light to pass. The display and covering layer may be located on a dashboard, door panel, or other interior portion of a vehicle or in any other suitable system.

Haptic feedback may be provided using actuators that are coupled to the covering layer. A user may supply touch commands or other input to devices such as touch sensors that overlap the display. In response to receiving a touch command input, control circuitry may use a haptic device to vibrate or otherwise move the covering layer.

If desired, touch sensors, force sensors, displays, and additional layers (e.g., haptic layers) may be mounted in a common location under a covering layer (e.g., a covered display or other light-based output device may be provided with force sensing, touch sensing, and/or haptic capabilities). As shown by illustrative display #50 of FIG. 10 below, the output from a display (e.g., the output light that passes through openings in a fabric, perforations in covering layers, or that otherwise is presented to the user) may include content such as text #108 and graphics #110.

Images that are presented by the display may be static, may be moving (e.g., moving graphic patterns or other video), may include color and/or black and white content, may include symbols, labels, instructions, media information, navigation information, vehicle status information, and other suitable information. 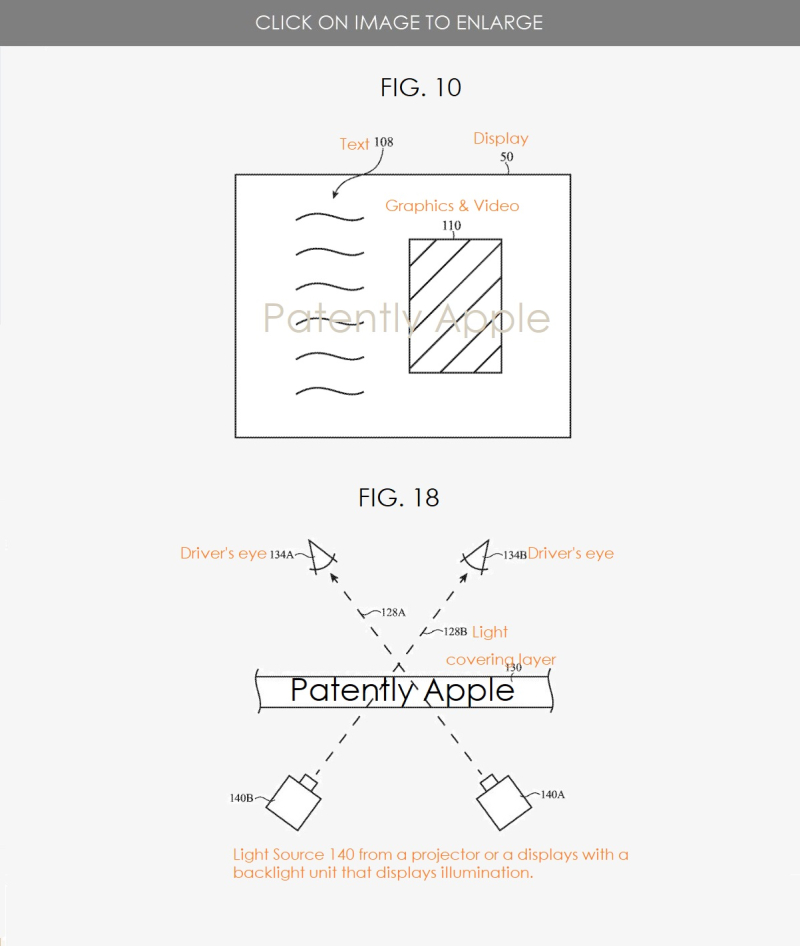 Apple's patent FIG. 18 above is a cross-sectional side view of a projection system that project images through a covering layer in multiple directions to form a display.

It's interesting to see Apple designing the interior of a next generation vehicle using next generation controls and means to see video and images. In the past, the driver and passengers would use hand cranks built into the doors in order to open a window. That eventually evolved to passengers touching small electric buttons to do the same thing and, in the future, Apple foresees replacing physical control buttons with light-based controls that are behind a fabric and only seen when the user actives them with a force touch.

At the end of the day, it's fascinating to learn about how the interior of vehicles of tomorrow will have a minimalist look and how it's has evolved over the last 50 years.

Apple's patent application 20200214148 that was published yesterday July 2 by the U.S. Patent Office was only filed by Apple a little over 3 months ago March 2020. Considering that this is a patent application, the timing of such a product to market is unknown at this time.