Home Archives Contact Us Subscribe Twitter MeWe Facebook Patently Mobile
Samsung made a Profit this quarter, but not from selling their Smartphones but rather from a Penalty Payment from Apple in a Display Dispute
Just as Apple is shifting to 'Apple Silicon' for Future Macs, Softbank is Seeking a buyer of their Trailblazing ARM Chip Design Company 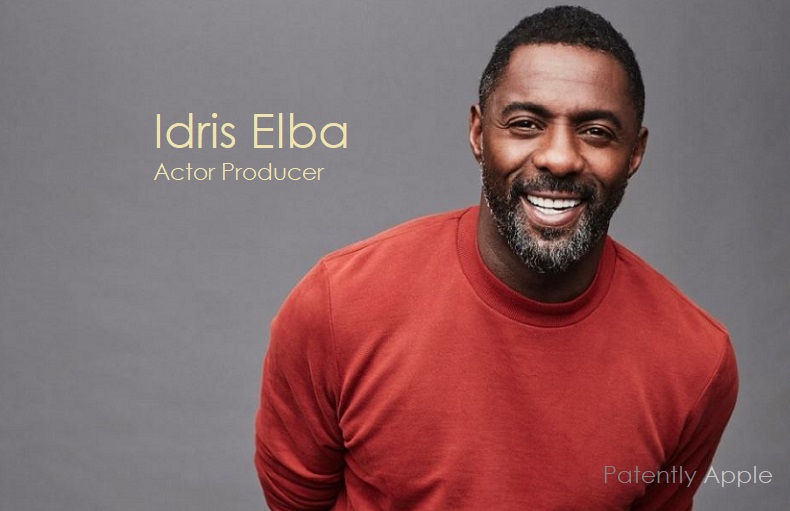 Apple TV+ has added Idris Elba to its burgeoning roster of stars and producers. The company has signed a first-look deal with Elba and his Green Door Pictures under which Elba will develop and produce global series and feature film projects for the Apple TV+ streaming service.

Elba founded Green Door Pictures in 2013 with the goal of developing new and established talent to champion inclusion, representation and diversity of thought and ideas which obviously interested Apple. For more on this, read the full report by the Hollywood Reporter.

Elba is known for roles including Stringer Bell in the HBO series The Wire, DCI John Luther in the BBC One series Luther, and Nelson Mandela in the biographical film Mandela: Long Walk to Freedom (2013). Elba also appeared in Ridley Scott's American Gangster (2007) and Prometheus (2012). Elba portrayed Heimdall in Thor (2011) and its sequels Thor: The Dark World (2013) and Thor: Ragnarok (2017), as well as Avengers: Age of Ultron (2015) and Avengers: Infinity War (2018). He also starred in Pacific Rim (2013), Beasts of No Nation (2015), for which he received BAFTA and Golden Globe nominations for Best Supporting Actor, and Molly's Game (2017). Some may remember him playing the role of Krall in Star Trek Beyond.