Home Archives Contact Us Subscribe Twitter MeWe Facebook Patently Mobile
Jony Ive, the Chancellor of the Royal College of Art in London, Curated a collection of Work this week branded "Optimistic, Singular and New"
Apple and the World Mourns a True Civil Rights Leader who believed in Non-Violent Protest 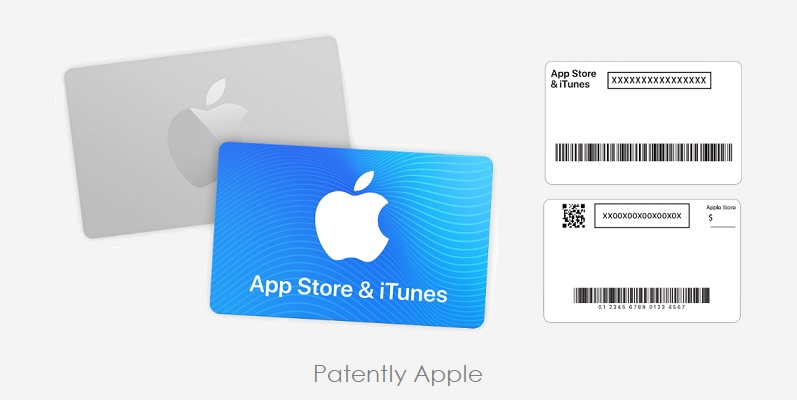 An 11-count Class Action has been filed against Apple and Apple Value Services by seven Apple customers that are listed on the court docket graphic below. The group claims that Apple knowingly or recklessly enabled an iTunes gift card scam. All those listed as bringing the Class Action forward were victims of the iTunes gift card scam. The Plaintiffs state that Apple falsely tells victims that 100% of their money lost in the scam is irretrievable and this isn't true. Further, the lawsuit claims that Apple has retained hundreds of millions of dollars in commissions in this scam that should be paid back to those who were victims in this highly sophisticated iTunes Gift Card Scam. 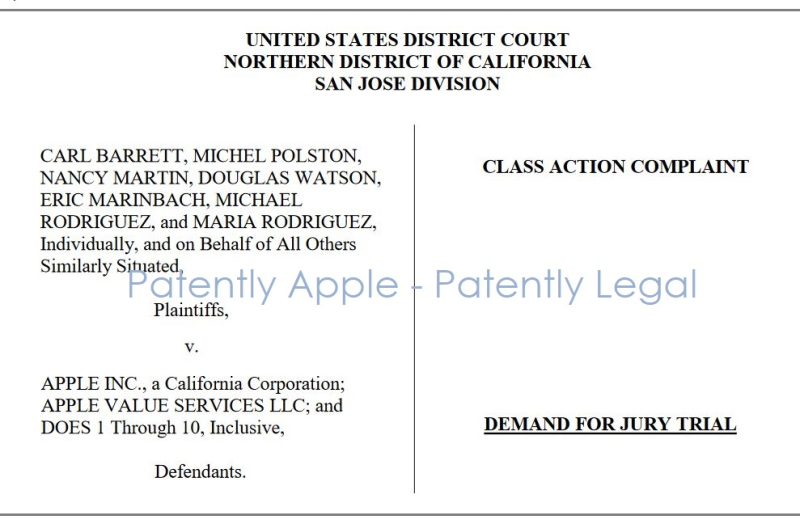 Nature of the Case

The following is directly from the group's formal lawsuit filed on Friday in full. Most emphasis placed in this segment was added by Patently Apple unless clarified.

"This case arises from Apple’s knowing or reckless enabling of the 'iTunes gift card scam.' Scammers have found a uniform way of tricking victims into paying them large sums of money via iTunes gift cards. Apple is incentivized to allow the scam to continue because it reaps a 30% commission on all scammed proceeds, and knowingly or recklessly, Apple plays a vital role in the scheme by failing to prevent payouts to the scammers.

The iTunes gift card scam preys upon many, including the elderly and vulnerable. It is prevalent. Apple dedicates a webpage to it, but apparently does little more.3. Perhaps most alarming, Apple describes the scam as "formulaic," yet does little to stop it or to return its 30% commission to scammed victims (much less other moneys that Apple can recover from the scammers).

Despite the fact that Apple retains the funds from purchases made using iTunes gift cards for four to six weeks before paying App and iTunes store vendors and keeps a 30% commission on scammed proceeds, Apple’s webpage and other communications falsely inform the public that all scammed proceeds are irretrievable:

A string of scams are taking place asking people to make payments over the phone for things such as taxes, hospital bills, bail money, debt collection, and utility bills.

Regardless of the reason for payment, the scam follows a certain formulaic: The victim receives a call instilling panic and urgency to make a payment by purchasing App Store& iTunes Gift Cards or Apple Store Gift Cards from the nearest retailer (convenience store, electronics retailer, etc.). After the cards have been purchased, the victim is asked to pay by sharing the code(s) on the back of the card with the caller over the phone.

Never provide the numbers on the back of a Gift Card to someone you do not know. Once those numbers are provided to the scammers, the funds on the card will likely be spent before you are able to contact Apple or law enforcement.

See Apple, About Gift Card Scams for more. [Emphasis added. The emphasis in the last sentence in the form of italics was found in the lawsuit and not made by Patently Apple).

The last sentence is highly misleading, and falsely suggests that there is nothing Apple can do for consumers who report the scam to it. Apple retains 30% of the spent funds for itself. At all times, this amount remains retrievable to the consumer. Apple holds the remaining spent funds for four to six weeks before paying the third-party vendors on the App and iTunes stores on which the stored value was spent, meaning the remainder is also retrievable to the consumer.

The iTunes gift card scam deprives consumers of hundreds of millions of dollars or more. The overwhelming majority of victims do not report the scam to the Federal Trade Commission ("FTC"). Yet even the limited iTunes gift card scams reported to the FTC during 2015-2019 exceed $93.5 million, with the dollar amounts increasing significantly each year. These publicly reported dollar amounts include the losses of only the subset of victims who fill out a detailed online FTC form asking for their personal information. As a result, this $93.5 million figure appears to be only the tip of the iceberg. Even if only 10% of scam victims report to the FTC (versus local police, attorney general offices, Apple, or nobody at all), the iTunes gift card scam would approach $1 billion, with Apple retaining $300 million in commissions.

As set forth in detail below, scammers monetize scammed gift card values in one of two ways. First, they can use the stored value on the iTunes gift cards they obtain through scams to purchase App and iTunes store content for apps that they control. Using this method, scammers receive payment from Apple (less Apple’s 30% commission) four to six weeks after spending the stored value from the wrongfully obtained iTunes gift cards. Apple has shut down apps for violating its fraud policies, begging the question of what happened to the fraudulently obtained proceeds. Second, scammers can sell the gift card numbers to third parties who then use them to purchase App store or iTunes products, but this latter method involves significant counterparty risk and steep discounts. Regardless of which method the scammers use, Apple keeps 30% of the scammed proceeds.

Not only does Apple keep 30% of the scammed proceeds, it is able to track all key points in the scheme. Apple has long bragged about its App Store “ecosystem.” The App Store is a marketplace created by Apple, over which it has full control, and into which it has full visibility. There are four key steps in the iTunes gift card scam:

Step One: The Point of Sale. Apple knows when, where, and in what amount the victim purchases the gift card. At the point of sale, the retailer must communicate with Apple to “activate” the gift card and record the stored value.

Step Two: The Apple ID Upload. Apple knows the Apple ID onto which the gift card number is uploaded. An Apple ID is a unique Apple "account" identifier through which customers on the App and iTunes stores transact. Apple iTunes gift card numbers must be uploaded to an Apple ID before being used in the App and iTunes stores. The amounts associated with these gift card numbers are referred to as “stored value” or "stored credit." Apple reserves the right to void the stored value if it merely "suspects" that the store credit was obtained fraudulently.

Step Three: Spending Stored Value on an App. Apple also knows where the Apple ID spends stored value in the App store ecosystem because each purchase must be made from an Apple ID.

Step Four: Payment of U.S. Dollars (Less Commission). Apple knows the identity and financial account information of the App and iTunes store proprietors who receive U.S. dollars from the gift card purchases because, four to six weeks after the purchase, Apple sends them the U.S. dollars (minus Apple’s commission).

Rather than publicizing its omniscience in this Apple "ecosystem" and its 30% take, Apple, as noted above, falsely tells victims that 100% of their money is irretrievable.

Plaintiffs bring this class action on behalf of themselves and an objectively identifiable class consisting of all victims of scams involving Apple iTunes gift cards.

Count 6: Breach of the Implied Covenant of Good Faith and Fair Dealing

Count 9: Violation of the Elder Abuse Laws of Other States

For full details of this case, please review the full Class Action lawsuit filing presented below, courtesy of Patently Apple.