Home Archives Contact Us Subscribe Twitter Facebook Patently Mobile
A UK Survey finds that 6 in 10 hearable users plan to upgrade to TWS Hearables within a year with Apple shown as the Leading Brand
To make Future MacBooks even Thinner, Apple has Invented the Retractable Keyboard 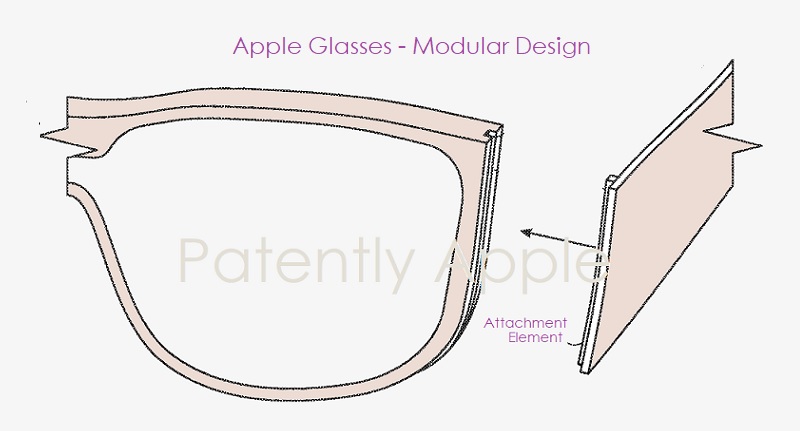 Today the US Patent & Trademark Office published a patent application from Apple that reveals a potential modular design for their future smartglasses so that users can exchange components for different functionality, to exchange lenses including prescription lenses and more. A user could use a high-resolution display when at home and exchange it for a higher battery component when being mobile.

Head-mounted devices, such as head-mounted displays, headsets, visors, smartglasses, head-up display, etc., can perform a range of functions that is determined by the components (e.g., sensors, circuitry, and other hardware) included with the wearable device as manufactured. However, space, cost, and other considerations may limit the ability to provide every component that might provide a desired function.

Given the diversity of desired components and functions, it would be beneficial to allow a user to modify components and functions of a head-mounted device to customize the user experience according to the user's desires. Head-mounted devices of the present disclosure facilitate customization, adaptability, and modification by a user according to the user's desires.

Systems of the present invention can provide a head-mounted device with exchangeable modules that provide a variety of different components and functions to achieve the results that are desired by a user.

Accordingly, a frame module of the present disclosure need not include permanent components that provide every function that will later be desired by the user. Instead, the head-mounted device can have expanded and customizable capabilities by the use of one or more arm modules. 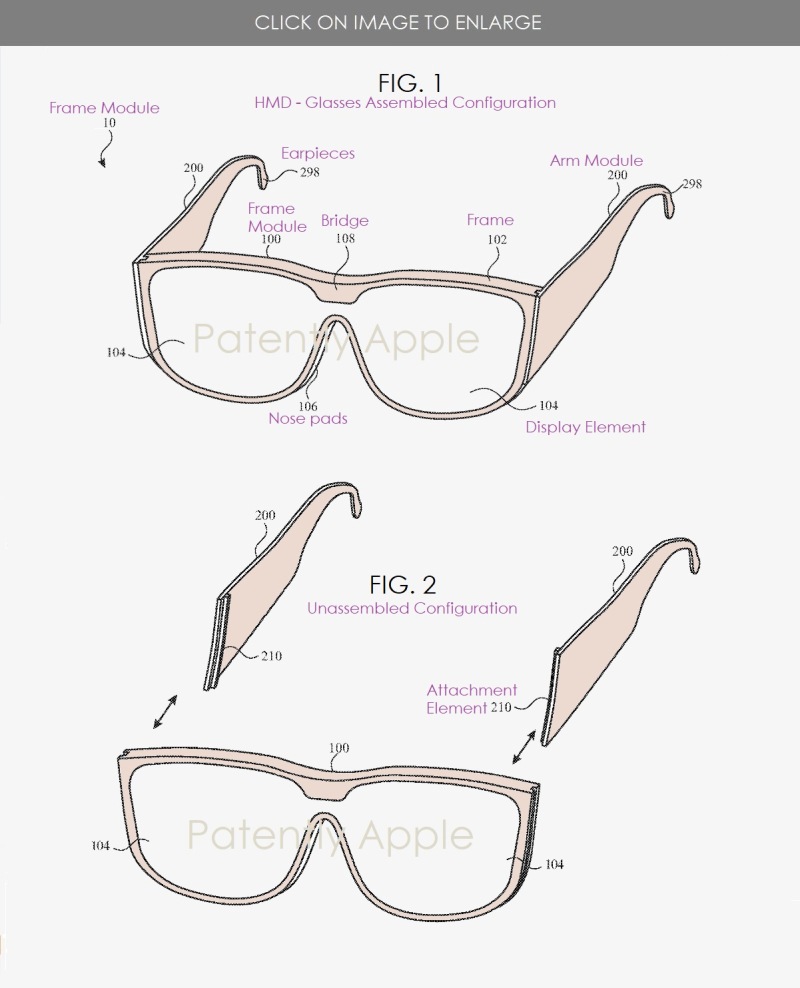 More specifically, Apple's patent FIG. 1 above is a head-mounted device #10 which includes a frame module #100 that is worn on a head with one or more arm modules #200. The frame module can be positioned in front of the eyes of a user to provide information within a field of view of the user.

The Glasses frame #102 can enclose and support various internal components (including for example integrated circuit chips, processors, memory devices and other circuitry) to provide computing and functional operations for the Glasses.

Apple's patent FIG. 2 present Glasses with exchangeable modules that provide a variety of different components and functions to achieve the results that are desired by a user. For example, Glasses device #10 can be provided with arm modules #200 that can be detached from the frame module #100. 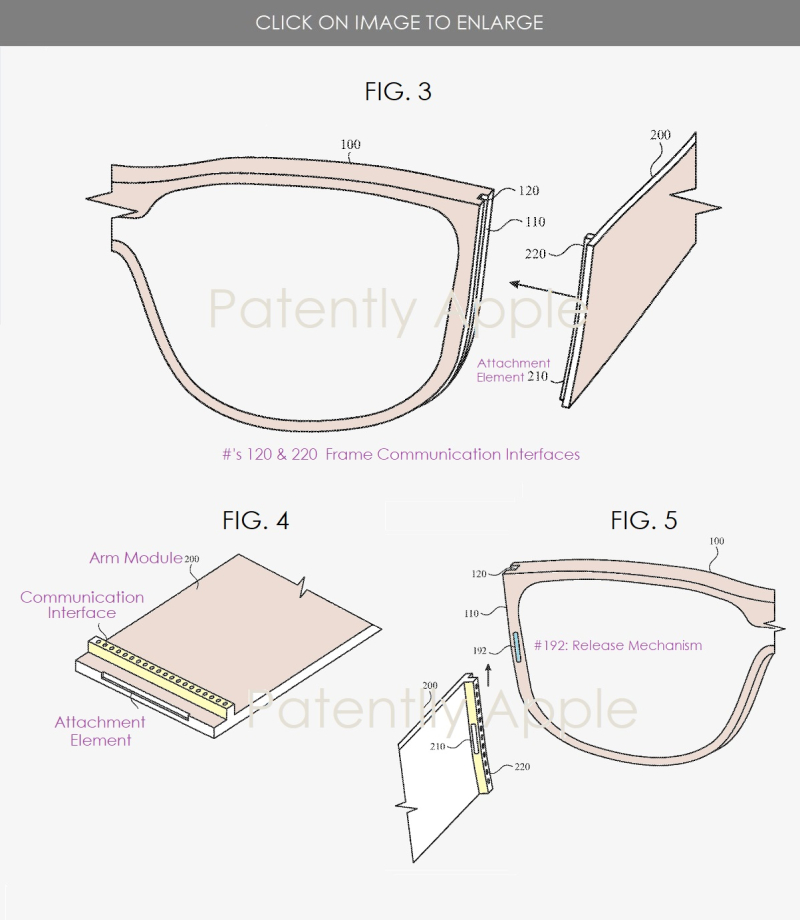 Apple's patent FIGS. 8-10 below illustrates a variety of arm modules that can be used at different times with a given frame module of a head-mounted device. The different components can provide different function functional components such as sensors, bio-sensors, batteries, I/O components, communication interfaces, controllers, and the like. 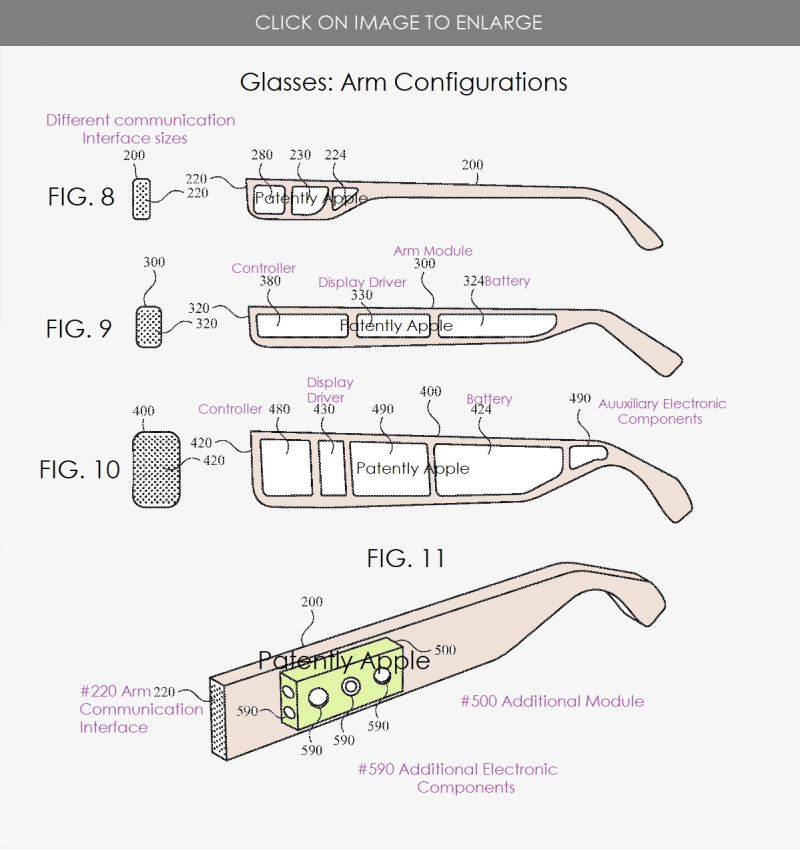 Apple's patent FIG. 11 above illustrates an additional module #500 that can be attached and operably connected to an arm module #200 independently of the attachment of the arm module to a frame module.

Apple's patent FIGS. 13 and 14 below illustrate a frame module that can be provided with exchangeable display elements. For example, as shown in FIG. 13, a display element #104 in one configuration can be exchanged with an additional display element #704 having at least one different feature (e.g., resolution, color, thickness, etc.). 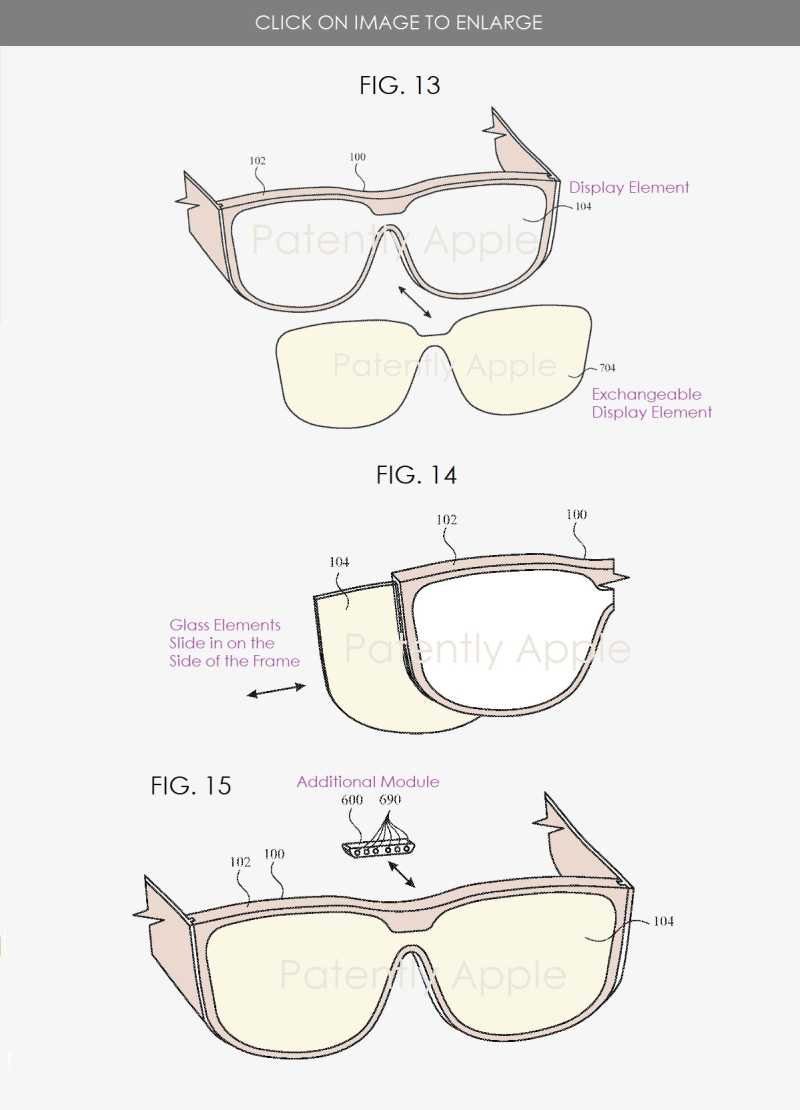