In late January Patently Apple posted a report titled "Apple Invention Details a Prescription Lens System for a Future Head-Mounted Display Device." We noted in the report that "The patent relates to a future mixed reality headset that will allow those with prescription glasses to put their unique lenses into a headset to eliminate the need to wear exterior glasses in the headset making it bulkier and less comfortable." Today an Apple patent takes their vision to the next level in much greater detail.

Today the US Patent & Trademark Office published two patent application from Apple that are focused on Apple's future eyeware in both Head Mounted Devices (HMD) and glasses. The main patent covers a powerful new vision correction optical system that's able to incorporate a user's glasses prescription into the system. The system will then alter the optics to address vision issues such astigmatism, farsightedness, and nearsightedness so that those who wear glasses won't have to them when using Apple's HMD.

That could be a killer application for Apple because according to (an undated report by) GlassesCrafter, The Vision Council of America claims that approximately 75% of adults use some sort of vision correction. 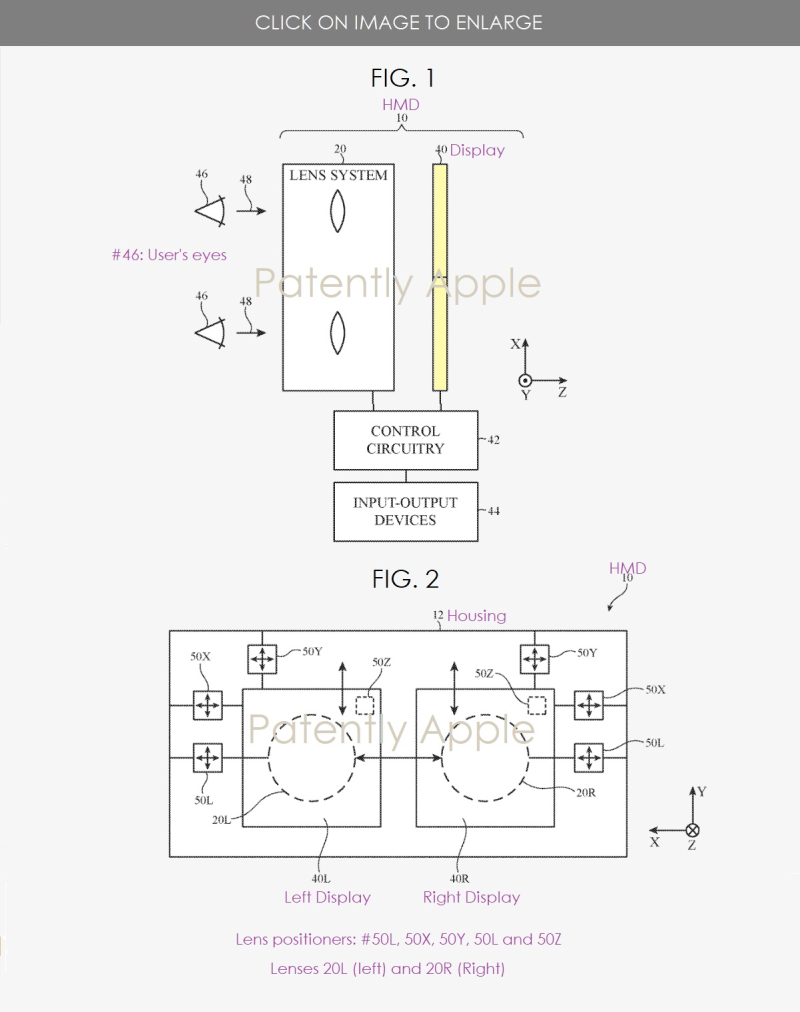 Apple notes that input-output devices (shown as #44 of FIG. 1) may include a sensing system that measures the eye characteristics of the user's eyes (#46 above). For example, a wavefront sensor such as a Shack-Hartmann wavefront sensor, Tscherning sensor, or a ray tracing sensor may be used to measure refractive errors in a user's eyes such as astigmatism, farsightedness, and nearsightedness.

Input Devices can also include cameras (digital image sensors) for capturing images of the user's surroundings, cameras for performing gaze detection operations by the viewing eyes and/or other cameras.

The heart of Apple's corrective vision system begins with patent FIG. 4 below which presents a graph showing how the focal length of a tunable cylindrical lens can be adjusted.

Beyond the basics, Apple notes that to tune the lens, another smoothly varying voltage profile (e.g., with a larger magnitude) may be applied to the liquid crystal material, thereby creating refractive index profile #68.

The lens system is designed to help correct the vision of a user with astigmatism, cylindrical lens power along the X and/or Y dimensions can be controlled using specific lens techniques as laid out in the patent filing. 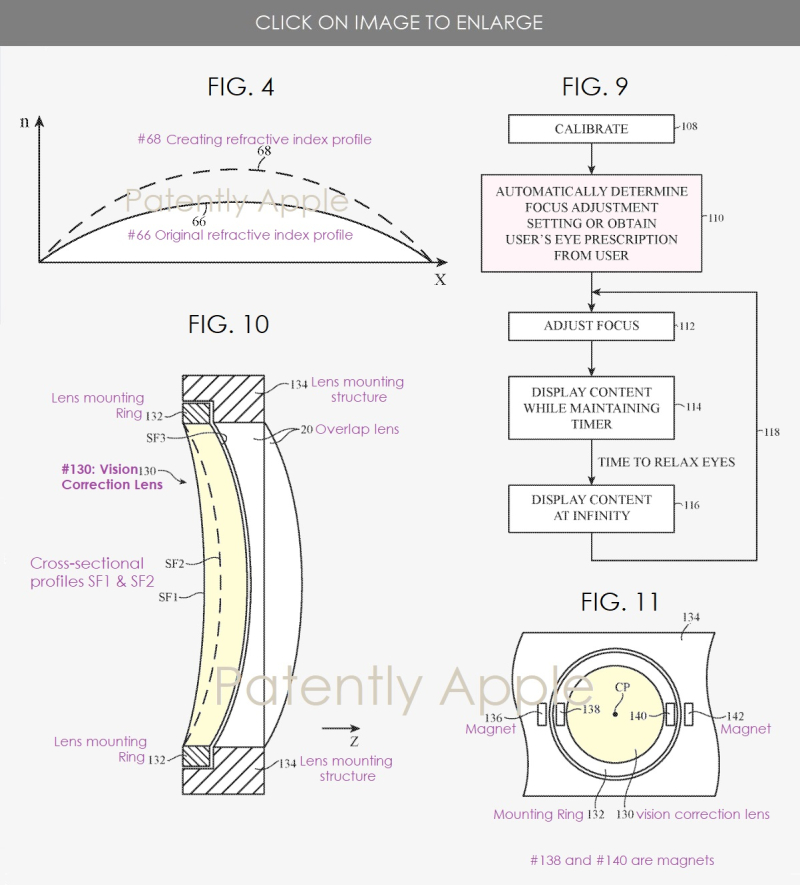 During operations, control circuitry may adjust the position of the display (#40 of FIG. 1 above), e.g., the separation in dimension Z of the left display from the user's left eye and the separation in dimension Z of the right display from the user's right eye) and/or may adjust tunable lenses in the optical system to bring content on the display into focus for the user while correcting for astigmatism, farsightedness, nearsightedness, and other refractive errors in the user's vision.

Apple further notes that a user of the headset may not have perfect vision. For example, a user may be nearsighted, may be farsighted, and/or may have astigmatism.

Further in to Apple's patent filing they note: "For example, a user playing a video game may be in a confined space and close to surrounding objects. To allow the user's eyes to relax during the operations of (block 116 not shown), a distant mountain scene may be inserted into the video game, thereby avoiding the need to interrupt the user with a text message ("relax eyes") or other content that might disrupt the user's enjoyment of the video game."

In patent fig. 11 we're able to magnets as part of the vision system. In part Apple notes that "to place vision correction lens #130 (shown in FIG. 10) into a desired rotational alignment with respect to structure #134 and the rest of THE HMD, ring #132 may be provided with one or more magnets such as magnets #138 and #140 and structure #134 may be provided with one or more corresponding magnets #136 and #142.

When the vision correction lens is mounted to the HMD, magnetic attraction between magnet #138 and magnet #136 and magnetic attraction between magnet #140 and #142 will help align and hold lens #130 in a desired angular orientation within the HMD thereby ensuring that the vision correction lens satisfactorily corrects a user's astigmatism.

Apple's patent application that was published today by the U.S. Patent Office was filed back in Q4 2019 with some work dating back to May 2017 being included in this application Considering that this is a patent application, the timing of such a product to market is unknown at this time.

A second Patent Application relating to Apple's future HMD and glass devices was published today under number 20200174255. If you happen to be an optical engineer familiar with hologram structures, reflection holograms, transmission holograms and computer-generated holography (CGH) displays, then you may stand a chance at understanding the depth of Apple's invention titled "Optical Systems with Multi-Layer Holographic Combiners." The patent that mentions Hologram 146 times could be reviewed here.