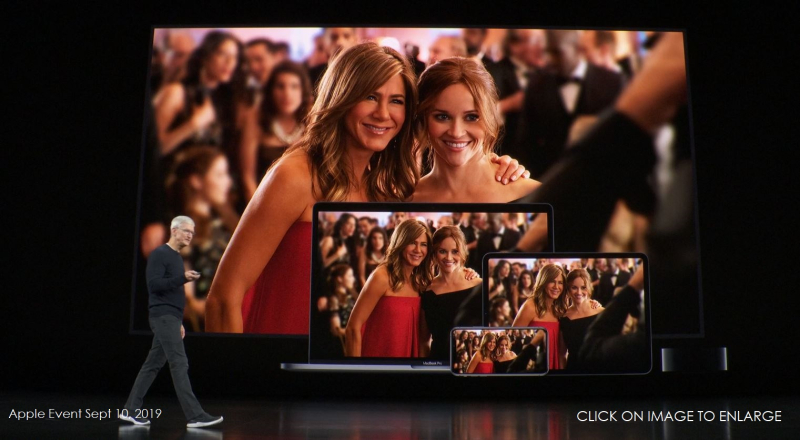 In February Patently Apple posted a report that pointed to Apple TV+ not delivering enough content. A.B. Bernstein analyst Toni Sacconaghi pointed out that Apple TV+ could be "failing to resonate with customers, perhaps due to its limited content offerings." Unlike other streaming services such as Netflix Inc. or Amazon Prime, which offer reruns to well-known content, Apple only offers original shows on its service, with 'The Morning Show' being the most high profile.

It appears that Apple has heard that message loud and clear and today it's being reported that the company is acquiring older movies and shows for its TV+ streaming service, aiming to build a back catalog of content that can better stack up against the huge libraries available on Netflix, Hulu and Disney+.

The company’s video-programming executives have taken pitches from Hollywood studios about licensing older content for TV+ and have bought some shows and movies, according to people familiar with the matter.

The move represents a subtle strategy shift for Apple TV+, which launched in November with a lineup of original programs.

The company plans to keep TV+ focused on original shows, and hasn’t yet acquired any huge franchises or blockbusters for its back catalog, according to the people, who asked not to be identified because the deliberations are private.

Still, it’s an acknowledgment that successful streaming services typically have a mix of old and new shows. That’s been the formula for Netflix Inc., Disney’s Hulu and Disney+, and Amazon.com Inc.’s Prime Video. For more on this, read the full Bloomberg report.

What would also make customers like myself happy is Apple adopting a binge-content feature. I'm really enjoying Defending Jacob drama on Apple TV+ right now but absolutely hate that I have to watch it like an "old TV" channel with weekly episodes. Apple's competitors like Netflix and Amazon Prime get the fact that fans love their binge option and I that's way I subscribe to their services too. Apple should offer this very popular option or fans might just drop the service until they do.