Updated May 27: Actual photo of this watch feature added

In late 2018 Patently Apple posted a report titled "A Samsung Patent Published Yesterday Points to Plans to Match the Apple Watch ECG Feature on a Future Gear Watch & more. Eighteen months later and it appears that Samsung is preparing to bring this feature to market in Q3, according to a new report.

According to a new South Korean tech report, Samsung’s health app had its electrocardiogram (ECG) measuring feature cleared for use by South Korea’s Ministry of Food and Drug Safety, the equivalent to the FDA in the US.

Samsung told the publication that "the ECG feature of Samsung Health Monitor app is paired with the sensors of its Galaxy Watch Active 2. It will measure and analyze the hearty rhythms of those wearing the watch, searching for irregularities indicating atrial fibrillation (afib)."

The app classifies a user's heart rate and rhythm as sinus (normal) or afib after the analysis. Users can activate the feature by turning their app on, then place their finger tip on their watches for 30 seconds while seated with their watch-hand are placed on a flat surface.

It increases the risk of complications such as blood clots, heart failure and stroke. Over 16 million people develop a stroke a year, with afib and high blood pressure being leading causes.

Samsung added that "The latest addition of ECG will allow users of the app to get a "better picture of their overall health and be able to share their results will their doctor(s).

It's unknown at this time if Samsung was or will be able to attain U.S. the required FDA approvals in time before launching this in Q3. There was also no indication in the Korean report that Samsung was able to obtain approval for this feature in the EU. 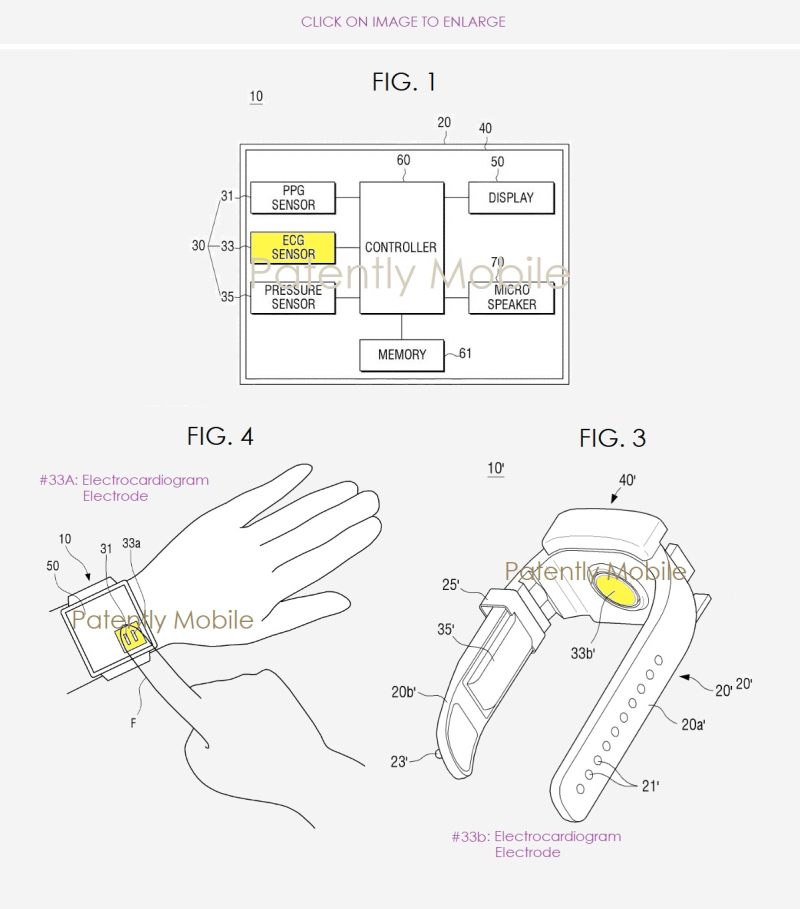 The Apple Watch uses its redesigned Digital Crown to obtain the ECG data whereas the Galaxy Watch appears set to use either a touch or a force touch display as noted in patent figure 4.

Update May 27:  Samsung has updated their information on this feature as follows:

"The ECG function works by analyzing the heart’s electrical activity via an ECG sensor on the Galaxy Watch Active2. Simply open the Samsung Health Monitor app when you are seated comfortably, and ensure the watch is fitted firmly to your wrist. Next, rest your forearm on a flat surface and lightly place a fingertip from the opposite hand on the top button , as illustrated below, on the Galaxy Watch Active2 for 30 seconds. The app will then measure your heart rate and rhythm, which will be classified as either a Sinus Rhythm (a normal, regular heartbeat) or AFib (when the heart beats irregularly)."